The U.S. Dollar often follows an interesting sequence in historical election years. Yet the question with this cycle is with so much going on due to the coronavirus, will the markets resort to similar tendencies this time around? As far as monetary and fiscal policies are concerned, the novel virus has made this a novel year when considering how the election outcome – Trump (Republican) or Biden (Democrat) – will impact markets.

So let’s look at the election cycles since 1980 and then consider the positioning of the USD as the election nears to determine what may play out this year. Looking at the prior ten election cycles, on average the USD rose in the months leading up to and after the election. But this is only an average set of changes; and again with this year being so far from average, we may be best served to take the norm with a grain of salt.

Considering how the market oftentimes places its own vote ahead of major events, it would be unsurprising to see an initial countertrend move develop as the market’s anticipated outcome is baked in. This can represent the foundation and opening leg for the so-called ‘buy the rumor, sell the news’ parable. For example, buying or selling into the election could be met with opposition via a corrective move before resuming the prior trend. But it’s also entirely possible we see an outright trend reversal.

One of the most consistent outcomes worth noting, is that in each cycle since 1980 -whether it was initially following the election or in the several months thereafter – there was some degree of strength to follow. Keep in mind, though, the election is only one driving force and the Dollar may quickly shift its focus to a more pressing set of fundamental factors.

Find Out the #1 Mistake Traders Make 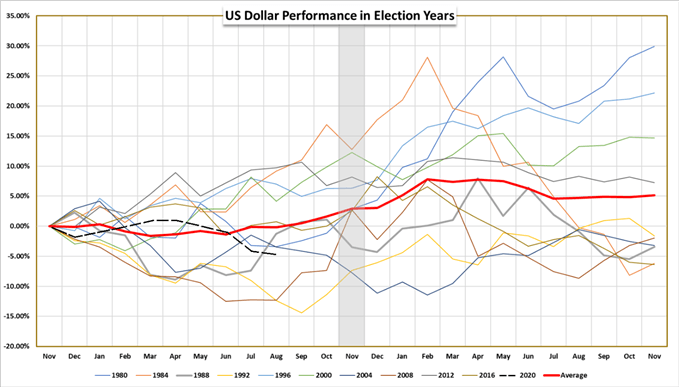 Another look at the current conditions, and how it may skew the Dollar’s response to the important event, is the status of speculative interest in the markets. There are a range of indicators and assets that can reflect upon market interests, but one of the more recognizable metrics is the CFTC’s Commitment of Traders (COT).

Using this report’s insights on futures positioning, we find that speculative interests (as opposed to commercial and hedging) have pushed net Dollar exposure to an extreme position through the latter weeks of September. It is possible that there is a rebalance before election night, but its current footing will further create a skew to account for when assessing whether we are due a ‘typical’ election response from the Greenback. 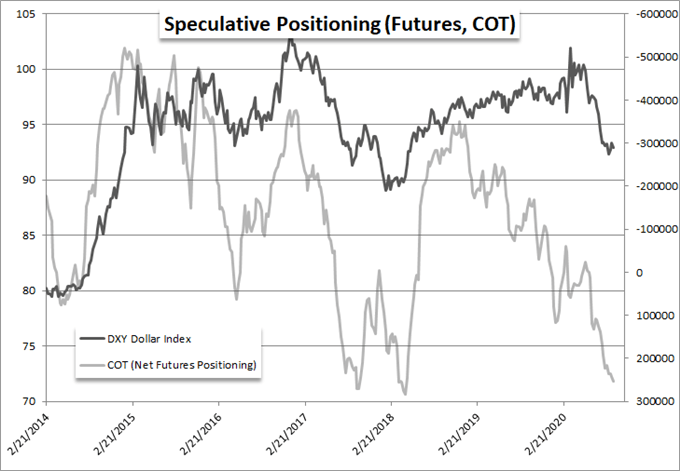 Open a demo FX trading account with IG and trade currencies that respond to systemic trends.

Whether you are a new or experienced trader, we have several resources available to help you; indicator for tracking trader sentiment, quarterly trading forecasts, analytical and educational webinars held daily, trading guides to help you improve trading performance, and one specifically for those who are new to forex.

In 2020, we have had a couple of things transpire which nobody expected: First, a pandemic with a major market crash. Second, a V-shaped stock market recovery. When the first event happened, I told myself […]