Hopes for a pickup in manufacturing activity were dampened this morning as Chicago PMI crossed the wires at the lowest mark since 2015, adding to weakness in the US Dollar. The manufacturing sector has contracted for 5 months now according to the Institute for Supply Management’s ISM manufacturing gauge. The US Dollar dropped further as the Chicago PMI report crossed the wires, with the DXY index dropping to its lowest level since January 23rd, currently trading at 97.66 from the 97.90 level earlier this morning.

Regional Federal Reserve manufacturing surveys along with ISM’s regional reports such as this mornings Chicago report give insights into how manufacturing is performing on a regional level and in turn, provides clues to manufacturing activity in the US. This mornings miss may dampen expectations for next weeks ISM manufacturing report that is expected to cross the wires at 48.5 which would send the US into its sixth month of contraction for the sector. 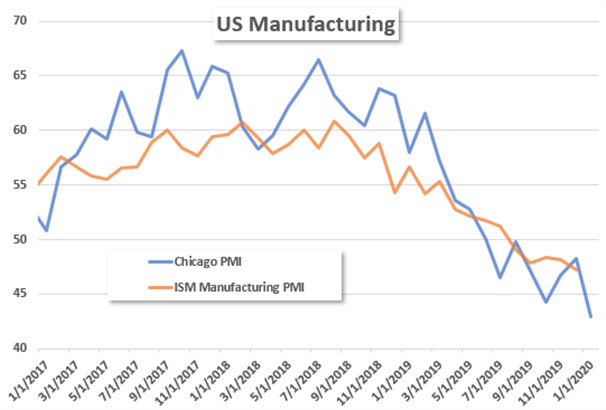 Digging into the figures behind the headline number for the release paints a gloomy picture for manufacturing activity in the major economic hub for the Midwest. All components in the index declined from the previous months read. New orders fell to 41.5 from 47.6, highlighting a slowdown in manufacturing demand.

The survey asked participants a special question for January with the report from ISM stating, “Will the signing of the USMCA agreement improve your supplier lines?”. The answers showed little optimism for a pickup in activity from the recently signed USMCA agreement with 60 percent of respondents expecting no improvement. 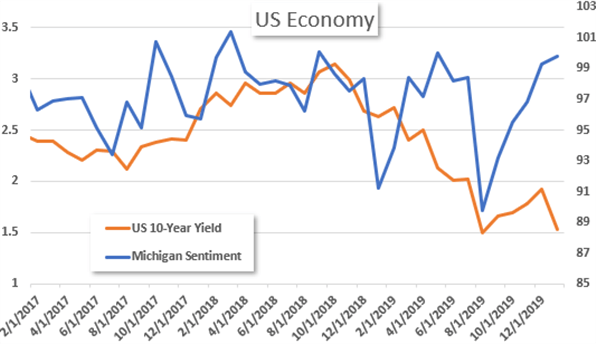 The University of Michigan’s final read for January was released shortly after showing a more positive note on the economy coming in at 99.8, up slightly from the preliminary print of 99.1. However, the report did little to support USD or lift investor risk-appetite. The Michigan report was boosted by a positive outlook on consumer finances as 53 percent of all consumers reported gains in their personal finances. The report points to further spending appetite from US consumers, who have been paramount in keeping the US economy chugging along. Despite consumer confidence remaining returning to near historically high level, US treasury yield have continued to fall as investors worry about a global economic slowdown.

bagi1998 Thesis Discovery Silver (OTCQX:DSVSF) (TSX:DSV:CA) is an exploration stage company whose business model is based on acquiring and exploring mineral properties, which feature strong grades, meaningful size, and access to existing infrastructure in mining-friendly […]