The US Dollar extended its advance against the major currencies on Friday, with gains picking up pace during the European trading session. There the British Pound depreciated following softer-than-expected UK retail sales data that fueled local monetary policy easing bets. Overnight index swaps are now pricing in about a 70% chance that the Bank of England (BoE) could deliver a 25-bp rate cut at its meeting later this month.

That would put USD at a further yield advantage against its G10 peers. This fundamental dynamic has been working to sap the appeal of the sentiment-linked Australian and New Zealand Dollars despite gains in equities. The S&P 500 hit another record high on Friday with the MSCI Emerging Markets Index following suit.

On the whole, AUD and NZD were relatively mixed. The rosy session on Wall Street was not without its hiccups and the anti-risk Japanese Yen cautiously strengthened. Stocks had to deal with mixed U.S. economic data. Housing starts were upbeat while industrial production and University of Michigan Sentiment printed on the softer side.

How can you trade around U.S. economic data?

The markets are in for lower-than-usual liquidity as the new week begins. Wall Street will be offline for the Martin Luther King Jr. holiday. Coupled with a relatively lackluster economic docket during Monday’s Asia Pacific trading session, the focus for currencies turns to sentiment. Due later in the session is the International Monetary Fund’s (IMF) World Economic Outlook update.

My majors-based US Dollar index closed at its highest this year so far. It is a measurement of the Greenback’s average performance against the Euro, Japanese Yen, British Pound and Australian Dollar. Prices are contained under key resistance (1.2889 -1.2921). A push above this area, in-line with the Morning Star bullish candlestick pattern from late December, opens the door to trimming the key downtrend.

What is the road ahead for USD in the first quarter? 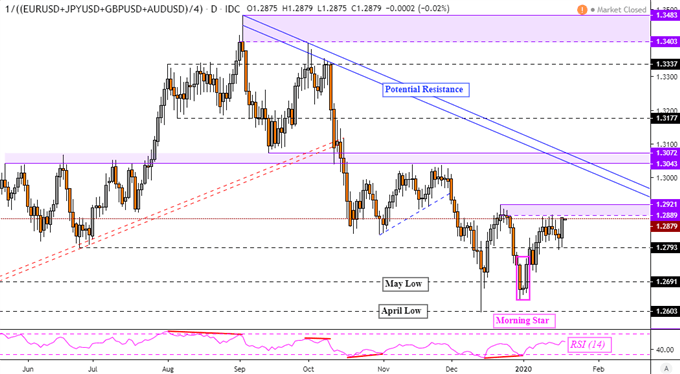