70 DAYS UNTIL THE US PRESIDENTIAL ELECTION

In 70 days, markets will experience what will arguably be one of the biggest planned geopolitical shocks in 2020 so far. Polling data from the Financial Times on August 24 show – much like yesterday’s stats – former Vice President Joe Biden in the lead. The upcoming Republican National Convention may stir these figures up, but a directional bias so far has been showing a tilt towards the Democratic nominee.

RNC Day 2 Ahead, Pompeo to Speak

The RNC so far has already been mired in controversy from Donald Trump’s latest decision about his attendance of the three-day event to now having Secretary of State Mike Pompeo appear as a speaker. America’s chief diplomat will be breaking convention by participating – though not in his official capacity as Secretary of State – in domestic, partisan political affairs.

Learn How to Trade The 2020 US Presidential Election

According to Politico, Deputy Secretary of State Stephen Biegun sent an email earlier this year, stating that: “Senate-confirmed Presidential appointees may not even attend a political party convention or convention-related event”. Mr. Pompeo falls into the category of “Senate-confirmed presidential appointee” but the memo does not prohibit him from attending the event in a personal capacity.

Like I wrote yesterday, the break from convention of the current administration is nothing novel. However, given the growing lead of Mr. Biden over President Trump, unorthodox maneuvers may become more common as the urgency to cross the finish line first becomes more pressing. While this may not have a direct market impact now, down the line it could make markets uneasy and push the haven-linked US Dollar higher.

What Is The Road Ahead For The US Dollar?

EUR/USD’s approach to a key cross-section between the May uptrend and a critical support zone between 1.1720 and 1.1698 may accelerate if the US Dollar rebound continues. Breaking the uptrend with follow-through could inspire bears to come out of their caves, while bouncing from the multi-tiered floor could reinforce bullish sentiment. What is almost certain, however, is the importance of this intersection. 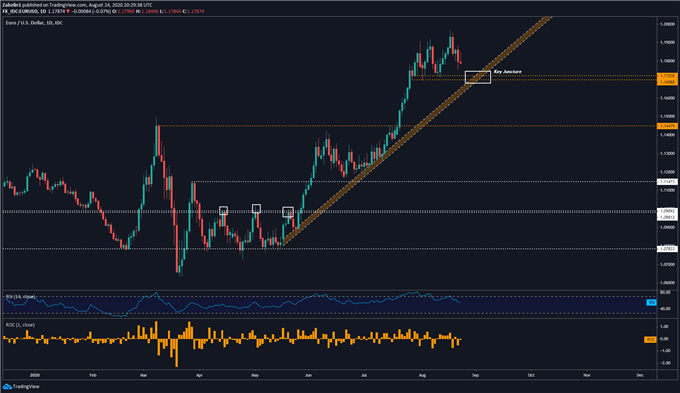