US Dollar Stems Losses as Calendar Turns to August

Following the US Dollar’s (via the DXY Index) worst monthly performance since April 2011, the first week of August has offered a reprieve for the beleaguered greenback. After falling nine of the last 12 days to end July, trading in August thus far has produced little overall movement: the DXY Index opened the month at 93.39; at the time this report was written, the DXY Index was trading at 93.46.

Even as the DXY Index entertains a sideways range, consolidating its losses, the bearish narrative undergirding US Dollar trading remains the same: the US economy will lag its developed counterparts in economic recovery, necessitating lower rates for longer as well as increased deficit spending. The forex economic calendar this week will unlikely move the needle: the July US consumer price index and July US retail sales reports are unlikely to provide the fundamental relief that is much needed; further, these will substantiate the claim that hopes for a V-shaped recovery are dead on arrival.

Moreover, confusion around the federal government’s stimulus efforts following President Donald Trump’s questionably legal executive actions (the power of the purse rests with the legislative branch, not the executive branch) make for an unrelenting difficult environment for the greenback.

US Treasury Yield Curve Still Not Helping the US Dollar

The promise to keep interest rates at low levels through 2022 has sparked and sustained the normalization in the US Treasury yield curve at the very front-end, and the fiscal stimulus efforts (deficit spending) has boosted inflation and growth expectations.

But the Fed’s actions are significant in this regard: they are preventing longer-term interest rates from rising in response to the deficit spending. Accordingly, while the nominal US Treasury 10-year yield continues to stay down, US 10-year breakeven rates (market-based inflation expectations) continue to rise, leading to a downturn in the real US Treasury 10-year yield (US 10-year TIPS). 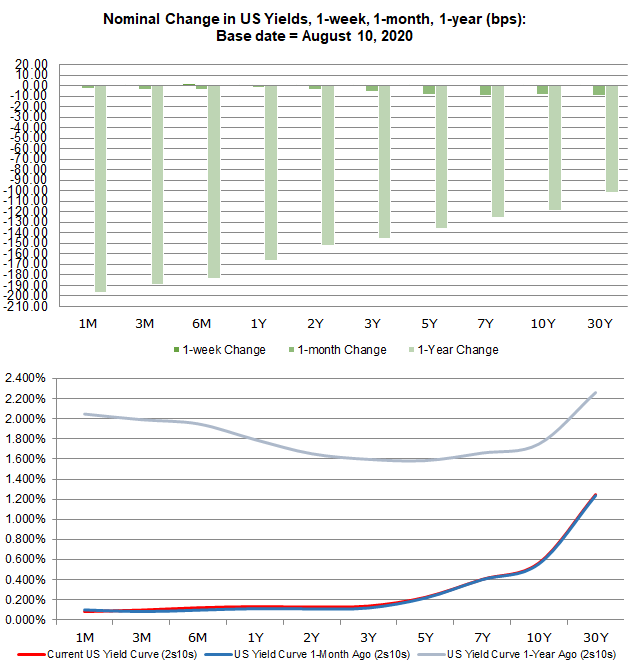 Yields are, as noted, depressed. The US Treasury 2-year note yield is hovering near 0.150%, whereas one-year ago it was closer to 1.650%. The bond market remains unconvinced that the US economy is back on the right track.

Nothing has changed with respect to the Federal Reserve, having enacted emergency interest rate cut measures.Rate markets are more or less stuck in a state of suspended animation. If the Fed is going to do anything from here on out, it’s going to come via more QE, a repo facility, etc. The latest extraordinary effort, the Municipal Liquidity Facility, is an example of this effort. 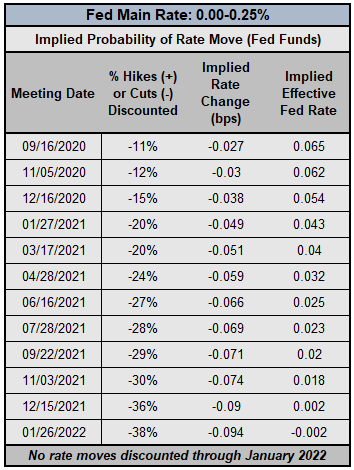 There’s been no indication that the Fed plans on moving rates into negative territory, and as a result, we’ve reached the lower bound for the time being. If yield curve control is implemented, we would expect a similar outcome to what is being experienced by the Reserve Bank of Australia main rate expectations curve in context of the RBA’s promise to keep rates at 0.25% for the next three years (e.g. yield curve control): any suggestions by rates markets that a rate hike is coming anytime soon is a pricing quirk to be ignored; interest rates are not going anywhere higher, at least through January 2022. 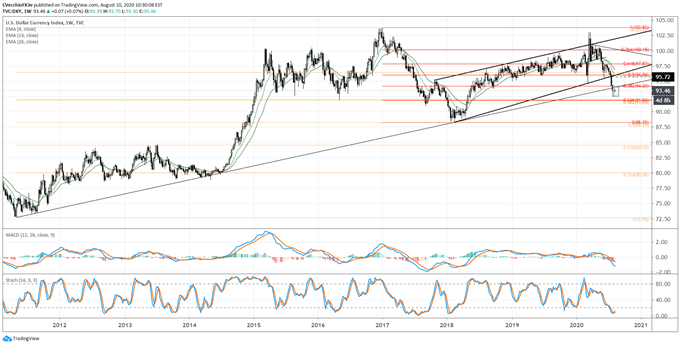 The rising channel from the February 2018 low and the March 2020 low remains in focus. Having already traded below the rising channel support as well as the 38.2% retracement of the 2017 high/2018 low range at 94.20, the DXY Index faces a longer-term bearish breakdown.

Technical momentum remains bearish, even as it has moderated, with the DXY Index trading below the weekly 4-, 13-, and 26-EMA envelope (still is in bearish sequential order). Weekly MACD is trending lower in bearish territory, while Slow Stochastics have started to turn higher, although they remain in oversold territory.

A potential channel breakdown that would suggest more significant losses over the coming months – perhaps towards 88.00 – remains the base case scenario. Invalidation would occur above 94.20. 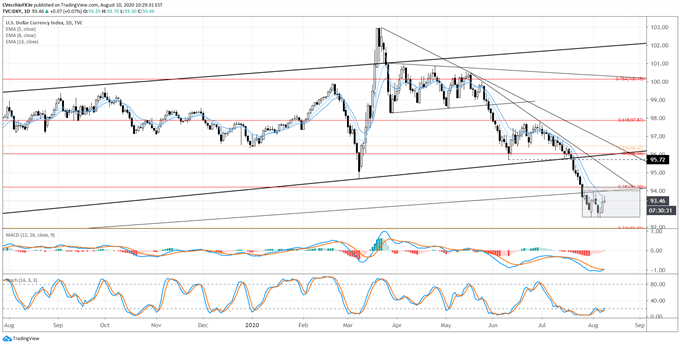 The DXY Index’s performance in August has curtailed bearish momentum, with prices trading today at the same level that they were on the first trading day of the month. The sideways range carved out, between the 2011/2018 trendline support and the 38.2% Fibonacci retracement as resistance and the August low as support, yields a range of 93.85 to 94.20. Contextually, this could be a bear flag: the favored resolution would appear to be to the downside. 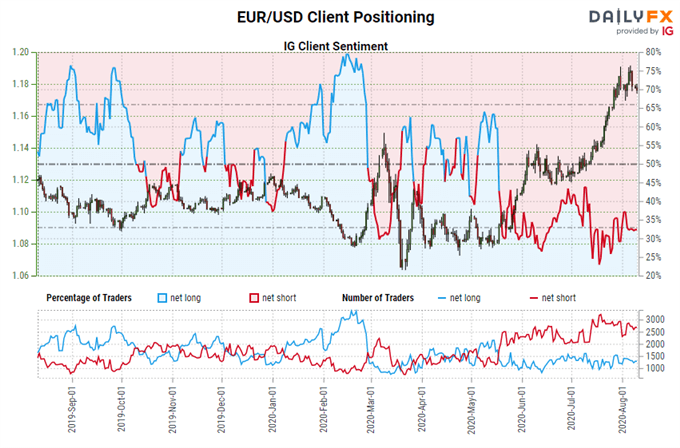 We typically take a contrarian view to crowd sentiment, and the fact traders are net-short suggests EUR/USD prices may continue to rise.

Traders are further net-short than yesterday and last week, and the combination of current sentiment and recent changes gives us a stronger EUR/USD-bullish contrarian trading bias.