Upwork Inc. (UPWK) recently went public and at today’s price of ~$10, I believe the company offers a long-term investment opportunity. Upwork is at the forefront of freelancing and through its platform, it enables the “gig economy” by connecting employers and freelancers from around the world.

There is every reason to believe that this new system of working will continue to grow, and with a solid balance sheet and reasonable growth expectations, I see Upwork as a clear buy at today’s price.

Upwork offers its users a platform in which freelancers and businesses can connect to collaborate and take on work projects. The company was IPO’d in 2918 and since then, the share price has just about halved, currently standing at around $10.

The platform is in essence quite simple. The freelancer creates a profile stating their work experience and relative skill. Businesses, create a profile and then create job offers. These job offers will appear on a freelancer’s “feed” and he/she can then submit a proposal for the job using “connects”. Connects, at the time of writing this, have to be bought by freelancers, although when I first started using the service a certain amount was available for free. The freelancer can also subscribe to a membership plan to get more favorable prices on connect. Job posters can also purchase various plans varying on their size and need. On top of this, Upwork also charges a transaction fee, as payments are made through their platform.

In terms of services and value, Upwork offers the following:

Below, we can see a distribution of revenue by segment:

We have what the freelancer pays, what the client (employers) pays and “managed services”, which accounts fees received for s engaging freelancers directly or as employees of third-party staffing providers to perform services on their behalf.

As far as competition goes, there are plenty of other websites that offer similar services. The most relevant competitor at this stage would probably be Fiverr International Ltd (FVRR), which went public even more recently in June of 2019.

In the section below, I will outline some of the strong points of Yum China and arguments in favor of the bull thesis.

As far as the balance sheet goes, Upwork has a decently strong financial position, with liabilities covered over two times by assets, and a very small proportion of debt overall. 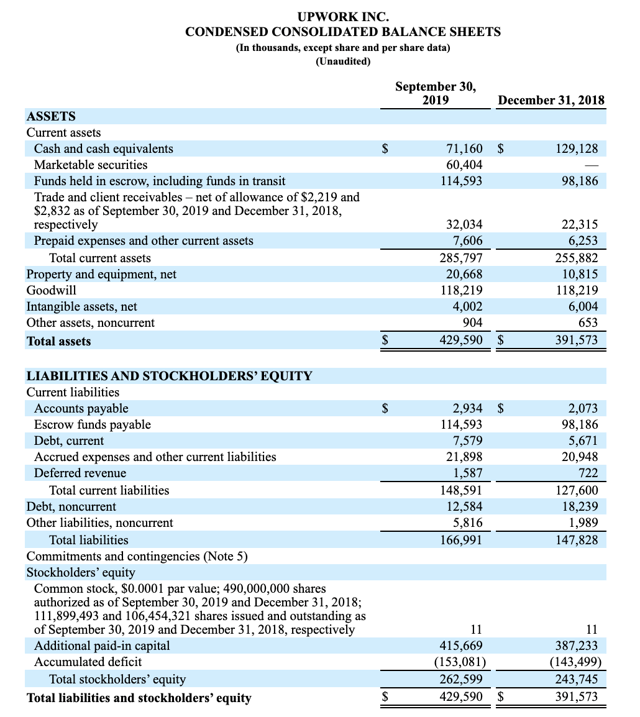 The most substantial liability the company has is Escrow funds payable, money which has been paid into Upwork but has not yet been released to the freelancers. In terms of ratios, the company has a financial leverage of 1.62 and Debt/Equity of 0.05.

I may be somewhat biassed here, as Upwork has enabled me to make a living as a freelancer in the past, but I inherently think the Upwork business model is a winner. Upwork is enabling people all around the world to participate in the gig economy, and in doing so is making the market more efficient by reducing barriers to entry and increasing competition. Of course, the story’s will abound of people having bad experiences and getting “scammed” on Upwork, I have no doubt this can happen. But, overall, I believe Upwork brings out the best in people. It enables resourceful and talented individuals and groups to collaborate in a more frictionless way and at the end of the day, this is the way forward.

Furthermore, while the 20% transaction fees may seem somewhat abusive to some, Upwork makes up for this in many ways:

– Upwork guarantees payment and acts as an arbitrator for both employer and freelancer.

– Upwork vets its freelancers, going as far recently as verifying their identity through videoconference

– Upwork provides fast and relatively cheap payment internationally. I am based in Spain and received my payment within less than a day of requesting it. This is a recent improvement, with transfers taking up to 3 days in the past.

– Upwork acts not only as an intermediary but also helps its enterprise clients in the hiring process, and their system actively recommends jobs to freelancers based on their skills and past work.

Overall, Upwork is striving to deliver better service, make its platform more “sticky” and, is finding ways to improve its service.

The “Gig” economy is just getting started.

While the term is certainly not new, the Gig economy as we know it is still in its infancy. In terms of growth, estimates suggest growth in this area of double digits in the following years. 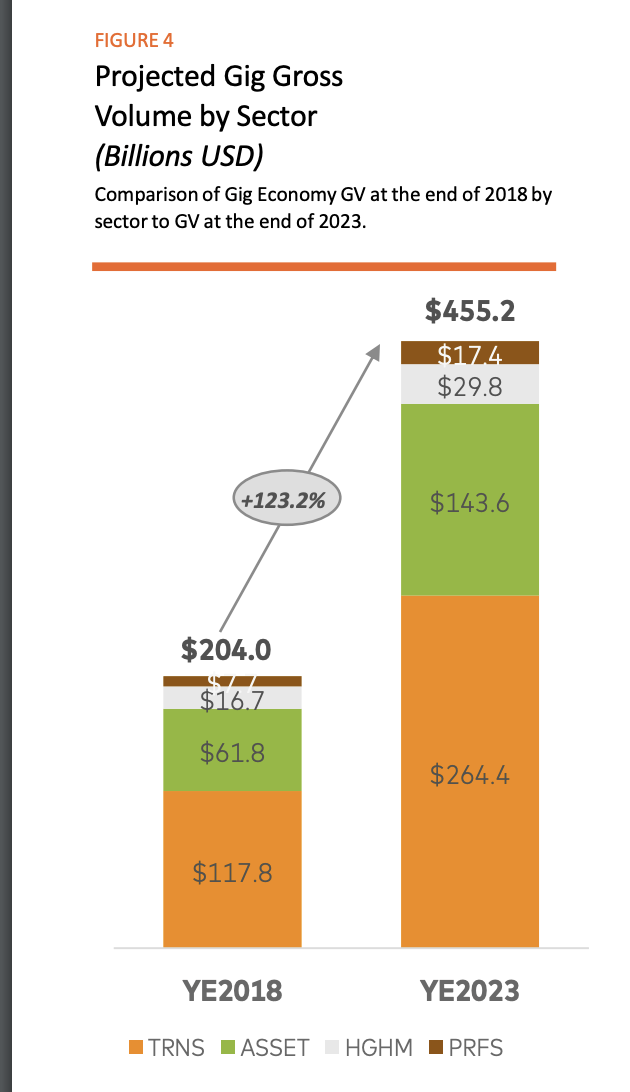 The above figure shows the growth of the gig economy by sector; Transport, Assets, Handmade good, household, and miscellaneous and Professional services. As we can see, professional services are expected to increase to $17.4 Billion in 2023. This seems perfectly plausible, and I don’t believe this will be slowed significantly by a recession.

There are of course some things worth mentioning that may stand in the way of Upwork’s success. For starters, regulatory crackdowns could negatively impact Upwork. However, as discussed in the recent earnings call, Upwork has the flexibility that comes with having freelancers all over the world. To this extent, even if some freelancers are negatively affected by regulation, employers can hire other, more competitive freelancers.

Competition is also a concern, with rival network Fiverr growing at faster rates. Upwork could also suffer from this, but there is still a large pie to split between them. Furthermore, If we look at Upwork’s services, its product is somewhat differentiated. Upwork seems more geared to serve big businesses and more skilled freelancers, while Fiver seems to cater to a wider array of generally smaller, less specialized jobs.

Finally, while I do believe fundamentally Upwork has great growth potential, and we should indeed see this as a growth stock, it’s important to measure whether the stock can effectively sustain growth. 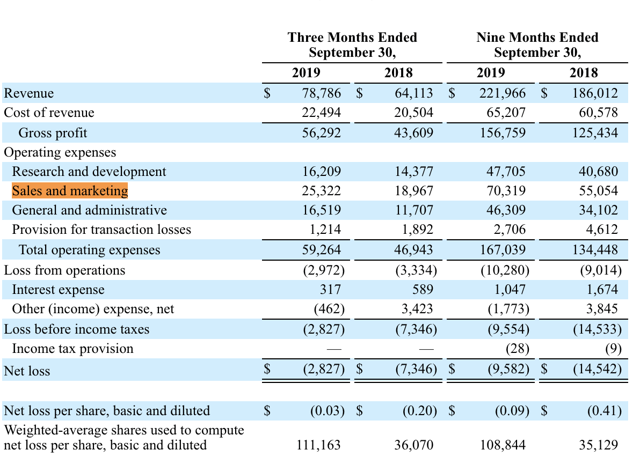 In terms of YoY revenue growth, Upwork has achieved a nice 20.16% growth, with estimates predicting a similar growth rate next year. However, notice that Sales and Marketing have increased more, 27.72%, which could be a reason for concern.

The real issue here, which is addressed briefly in the earnings call is that of sales productivity. When asked about the reason behind this increase, in spending, CEO Stephane Kasriel, points out this is the result of aggressively expanding their sales team and promoting sales reps to management positions. This is, in theory, because the sales reps are indeed achieving their targets. Furthermore, he notes that must of the RnD spending goes towards improving sales efficiency. Therefore, what they are doing is getting a step ahead, so that they can fully leverage these improvements in the future. This makes theory on paper, but this metric, to me, holds the key to the success or failure of Upwork and I will be keeping an eye on how this develops.

Upwork holds plenty of long-term potentials. The gig economy is thriving and not only can Upwork keep expanding its clients, but it also has the chance to serve its customers in more ways. Adding functionalities to the platform is a great way to both increase revenue and customer retention. For this reason, I believe Upwork could prove to be a very good investment in the long-run.