As you can see in the following chart, the United States 12 Month Natural Gas Fund (UNL) has strengthened substantially over the past month on the back of a rally in natural gas.

It is my belief that UNL is headed higher over the coming months based on a recovery in gas fundamentals as well as broad seasonal patterns in inventories which are indicative of a price rise over the next year.

Over the past few months, I’ve been monitoring a broad seasonal pattern in inventories. This pattern is the year-over-year change in stocks seen from a multi-year perspective. 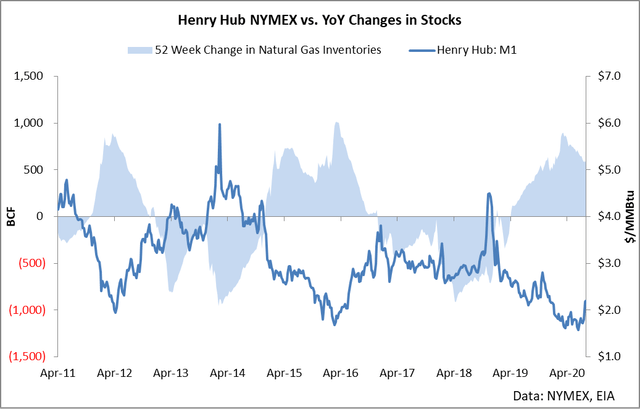 Earlier this year, we witnessed natural gas inventories climb on a year-over-year basis by over 900 BCF. Put simply, this was a quite bearish time for natural gas, as inventories starting climbing in the early 2019 time period and this increase in stocks resulted in the price of gas falling by over 50%.

While it is important to note the clear relationship between changes in stocks and changes in price, I am most interested in the predictive element contained in the above data. For example, if you look closely at the chart, there are generally maximum and minimum levels which are seen in the year-over-year change figure. What I mean by this is that it is very rare to see gas inventories rise by over 1,000 BCF on a year-over-year basis, and most gains in stocks around this territory tend to be reversed in fairly short order.

What is truly noteworthy about the above data is that it captures a broad and cyclical pattern, or the commodity the cycle. The commodity cycle is pretty straightforward: overproduction leads to poor prices, which then leads to underproduction and rising prices. This cycle continues in a broad, multi-year pattern, which is clearly seen in the above chart. For example, in 2015-2016, inventories climbed while prices fell strongly, which ultimately set the stage for falling stocks and rising inventories. The same pattern can be seen in 2012, in which a strong rise in inventories was followed by a strong rise in price.

Seen from another perspective, here is the average 1-year gain in natural gas after a past 1-year change in inventories of a certain magnitude. 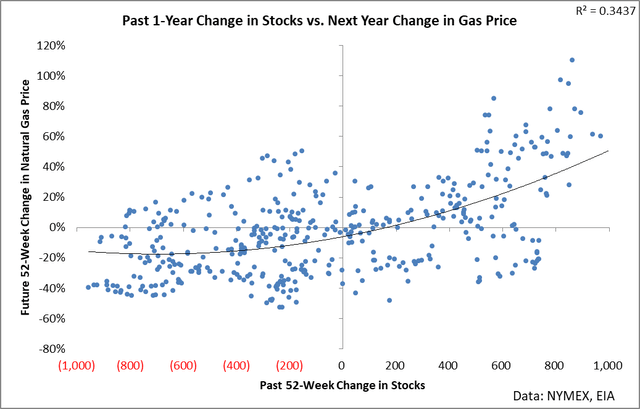 The data is imperfect (as is all market data), however the relationship is clear: the larger the gains in stocks, the bigger the future rally in the price of natural gas. In other words, given that this spring we witnessed a rise in gas stocks by over 900 BCF on a year-over-year basis, historic data would say that we can expect a rally of around 50-100% over the next year.

However, we’ve got a bit of a problem in that at present, the market has rallied more than 50% over the past month. 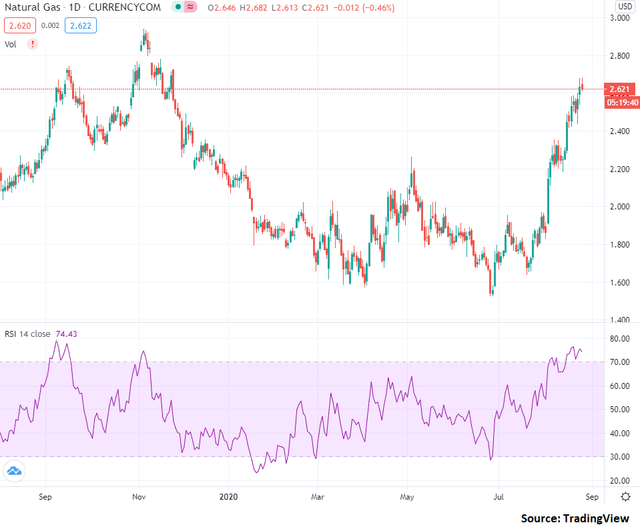 In my opinion, the price of gas has gotten ahead of the fundamental thesis at work in the data. Historic analysis suggests that changes in price at broad seasonal inflection points last for several quarters and prices tend to rise 50-100% over this time period. In other words, the recent rally has been too far and too fast, in my opinion. For example, over the past month, we have seen what is normally witnessed over the period of 6-12 months during historic prior movements.

Additionally, the market is technically overbought, as seen by the Relative Strength Index (RSI) below the chart. The RSI indicator is a somewhat complex calculation that normalizes price movements to arrive at a number that represents the strength of price changes. At present, the indicator is over 70, which would say that natural gas is overbought. If you look back in September and November, you can see that on average, when natural gas is overbought, it tends to see price reversals over the space of the next few days and weeks.

I believe that the current rally has gone too far over too short of a time frame which has me moderately bearish natural gas over the next 1-2 weeks. However, I believe that the fundamental message is very clear: gas inventories are in a broad seasonal inflection due to low prices which have impacted supply, and this new trend will play out over the next few quarters. So, if you’re a short-term trader, I believe it’s best to wait and buy gas when we get a sizable pullback. However, for longer-term traders, this is likely an acceptable time to buy (even though I would suggest waiting to get better prices).

When it comes to natural gas ETPs, each specific product has a separate set of methodology constraints to consider. In the case of UNL, I believe it is one of the strongest ETPs available for gas traders who are trading broad fundamental themes.

UNL is an ETF which is a sister fund to the popular United States Natural Gas ETF (UNG). UNG is a bit infamous in the gas space for losses due to roll yield because it is holding and rolling exposure in the front futures contract for natural gas. Natural gas futures are generally in contango (about 85% of the time), which means that UNG is experiencing heavy losses from roll yield.

UNL is a strong alternative to UNG because UNL is holding 12 months of futures contracts. This means that the heavy degree of convergence seen in the front contract only impacts 1 of 12 positions held by the fund. This means that roll yield is much less for UNL and makes for a strong winning proposition for holding the product.

Additionally, since UNL is holding 12 months of futures, it benefits from broad changes in the futures curve. What I mean by this is that when natural gas traders examine supply and demand information, they tend to price this information into the futures curve by buying and selling contracts several months (or even years) into the future. Since UNL is holding exposure out to a year, it stands to benefit from these adjustments to the curve.

Natural gas is currently riding the wave of a broad seasonal inflection point in supply and demand. While gas is likely short-term overbought, the adjustments to supply are likely going to continue propelling prices higher. UNL is a strong option for long-term gas traders in that it both minimizes roll yield and gives exposure to the futures curve.

© Reuters. Traders wearing masks work, on the first day of in person trading since the closure during the outbreak of the coronavirus disease (COVID-19) on the floor at the NYSE in New York By […]

AUD, NZD Analysis & News US Dollar Correction the Dominant Driver Across the G10 space, a corrective USD has been among the key drivers behind FX markets throughout the past week. Among the notable underperformers […]