This article is part of a series covering some of the world’s most outstanding assets in the field of natural resources, and the investable companies that operate these assets. Exceptional assets give these companies a competitive advantage which usually translates into high margins and an ability to weather periods of depressed commodity prices. A unique asset alone does not guarantee success, though, as we will see in some cases, Ciner included.

Anyone familiar with the spectacular scenery of Wyoming knows how exceptional the geology of the region is. The state’s natural wonders are not restricted to its national parks: Soda ash, a chemical compound that usually requires complex synthetic processes, can be found almost readily available (in natural trona) in Wyoming’s Green River Basin. Among the companies that mine the world’s largest trona deposit are Ciner Resources LP (CINR), Genesis Energy LP (GEL) and Natural Resource Partners LP (NRP), with Ciner the pure-play option for investors looking for soda ash exposure.

I bought some units of Ciner a few years ago, enthused by the exceptional nature of the Green River Basin deposit. Profitability, for the most part, has lived up to the asset’s quality. The unit price, however, has tanked, with the MLP structure putting common unitholders in an awkward position where the decisions are made primarily in the best interests of the general partner, a Turkish conglomerate. Ciner, in fact, proves that a unique asset does not guarantee investment success, at least in the short-term. The current unit price provides opportunity, but there are a few things investors need to be aware of in order to make an informed decision.

The Asset: The World’s Largest Trona Deposit, In The Green River Basin of Wyoming

The trona deposit of the Green River Basin originates from the ancient Lake Gosiute, a body of water that was nearly twice the size of Lake Erie. As the lake shrank, the highly alkaline water evaporated and huge beds of trona began to form:

The Green River Basin geological formation holds the largest, and one of the highest purity, known deposits of trona ore in the world. Trona, a naturally occurring soft mineral, is also known as sodium sesquicarbonate and consists primarily of sodium carbonate, or soda ash, sodium bicarbonate and water. […] The vast majority of the world’s accessible trona reserves are located in the Green River Basin.

The economic benefit of this exceptional natural asset derives from the cost-effective manner in which trona can be processed into soda ash. The process does involve several steps – trona is mined, crushed, dried, dissolved, filtered, recrystallized , and redried – but it is much more straightforward, economic, and environmentally-friendly than the more widespread chemical methods:

According to historical production statistics, approximately 30% of global soda ash is produced by processing trona, with the remainder being produced synthetically through chemical processes. The processing of soda ash from trona is the cheapest manner in which to produce soda ash. The costs associated with procuring the materials needed for synthetic production are greater than the costs associated with mining trona for trona-based production. In addition, trona-based production consumes less energy and produces fewer undesirable by-products than synthetic production.

The average cost to produce natural soda ash is, in fact, about 50% of the energy-intensive synthetic alternatives, whether it be the Solvay Process or the China HOU method: 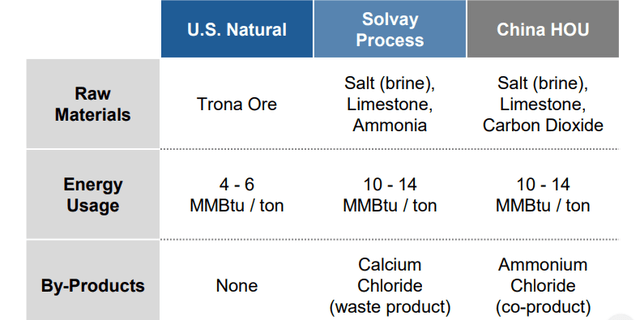 Soda ash has many applications, including flat glass, container glass, detergents, chemicals, mining, paper and other consumer and industrial products. 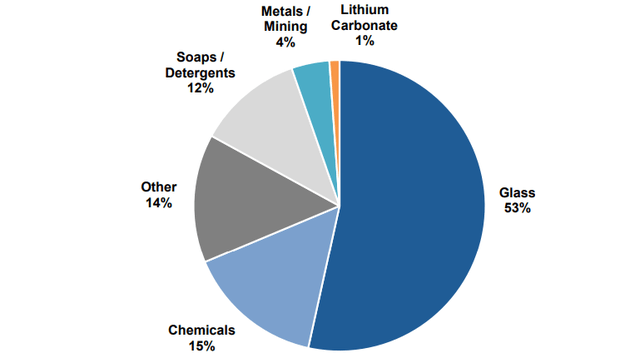 Soda ash consumption is stable in the U.S. However, global demand grows 2 – 3% per year thanks to the increasing needs of emerging markets. 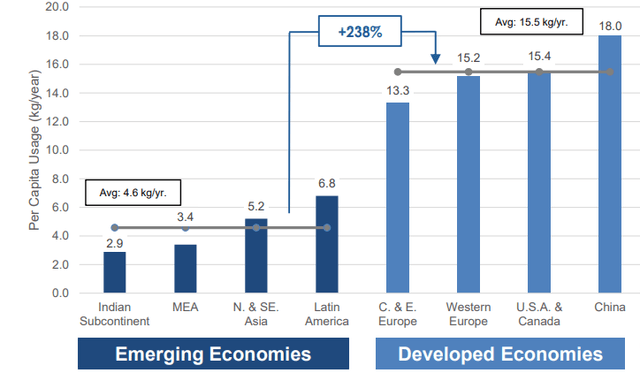 Since the natural, cost-effective process used by U.S. producers puts them at the low end of the cost curve, they are able to export their soda ash to international markets. In fact, they can export any quantity they produce, with natural soda ash simply displacing the more expensive synthetic production.

Zooming in on the Green River Basin deposit, the area is divided into a number of leases, with four producers involved:

Tata and Solvay’s presence shows how strategic the resource is, and how cost-advantaged it is compared to Solvay’s own chemical process. 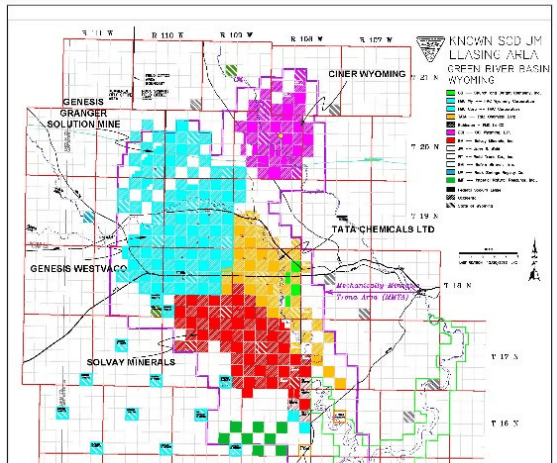 Each lease corresponds to one or several trona beds, whose depth varies. While all these mines are low-cost, a shallow depth puts a producer in an even more favorable position. 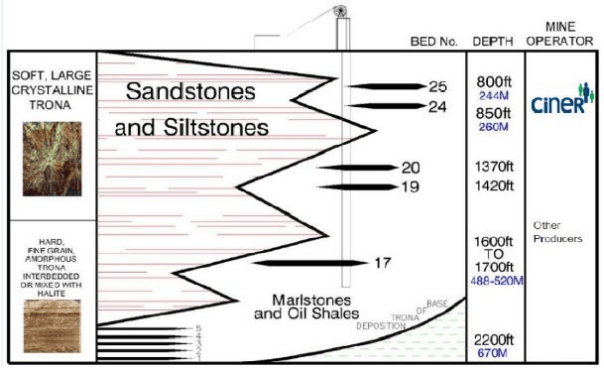 We will not discuss here Tata and Solvay, which are multinationals for which the Wyoming assets do not move the needle. Our main focus will be Ciner Resources LP and Natural Resource Partners LP, who jointly own the Ciner Wyoming production facilities, and Genesis Energy LP, which operates several mines in the area. 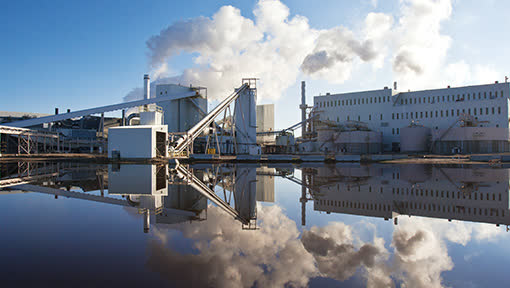 Ciner Resources LP: Solid Fundamentals But With Some Caveats

The chart below shows the corporate structure of which Ciner Resources LP (“Ciner”), a master limited partnership (MLP) is part. 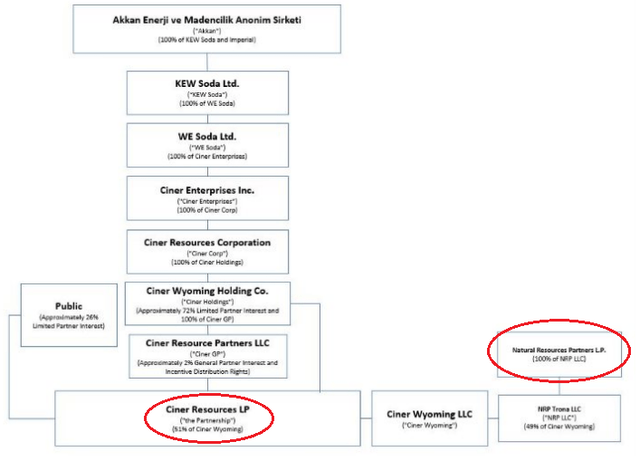 A few things to note here:

From a business perspective, despite a few unplanned maintenance shutdowns every now and then, Ciner has delivered solid operating performance. The profitability metrics, with ROIC in the high single-digits in recent years, is a testament to the cost-advantaged nature of the business:

This is set to continue since Ciner has 115.5 million short tons of soda ash in its Green River Basin reserves, equating to more than 50 years of production. Price action in the common units of Ciner, however, shows that unitholders have not had a great time in the past couple of years:

Why such poor stock-exchange behavior despite the reasonably good business performance (leaving aside short-term tailwinds from Covid-19)? There are two main reasons for this:

The first distribution cut occurred in 1H ’19, when Ciner decided to increase production levels to 3.5 million tons of soda ash per year. This will require significant CapEx and Ciner intends to fund 50% of the costs through retained earnings, hence the distribution cut. While the decision to expand and the conservative financial planning make sense, the unexpected dividend cut did not go down well with income investors. This was compounded by the suspension of distributions that was implemented in July 2020 due to the impact of Covid-19.

Beyond these transient distribution cuts (the recently-released 3Q results show that the business has already started to rebound from the pandemic-induced weakness), there are more permanent concerns linked to the MLP structure. The Ciner group, which is both the owner of most common units and the General Partner (GP), has considerable power over retail investors, as acknowledged in the risk factors section of Ciner’s annual report:

The first related risk stems from the fact that the Ciner group’s facilities in Turkey could compete with the U.S. operations:

Ciner Enterprises and other affiliates of our general partner are not restricted in their ability to compete with us.

While Ciner’s U.S. operations will always be able to sell 100% of their production, the Turkish parent could conceivably keep the most lucrative markets and customers to itself. This is a risk that I analyzed in an earlier article. It’s worth noting that the Ciner group has started to import soda ash from Turkey via the east coast of the U.S.

The other key risk, in my view, is that of the Ciner group potentially buying back retail investors’ units, on a compulsory basis, at unfavorable prices:

At this point in time, the units are arguably very cheap relative to the strong business fundamentals. For investors who invested at higher prices (this author included), being bought out at the current price would be an unpleasant development. For new investors, this is less of a problem.

Finally, Ciner has made the strategic decision to increase its integration with the Ciner group, by exiting ANSAC, the marketing arm of North American exporters, at the end of this year. The aim is, according to Ciner, to leverage the group’s global network and increase market share:

We believe that by combining our volumes with Ciner Group’s soda ash exports from Turkey, Ciner Corp’s withdrawal from ANSAC will allow us to leverage the larger, global Ciner Group’s soda ash operations which we expect will eventually lower our cost position and improve our ability to optimize our market share both domestically and internationally. Further, being able to work with the global Ciner Group will provide us the opportunity to attract and efficiently serve larger global customers.

This may prove to be correct, but there are no guarantees at this stage that the partnership will benefit from this move. This creates more uncertainty for unitholders.

The best downside protection unitholders have, at this point, is the very cheap valuation. At the current unit price, the EV/EBITDA ratio based on the past 5-years’ average performance is 5.3x. Based on 2019, it is just 3.3x. This leaves room for considerable upside for patient investors. But the risks and uncertainties should be kept in mind when sizing a position.

Despite its 49% stake in Ciner Wyoming, which operates the mine, Natural Resource Partners LP does not have much say in the company’s management. In truth, the soda ash segment is not a key driver of this MLP’s performance: the main driver by far is the Coal Royalty segment: 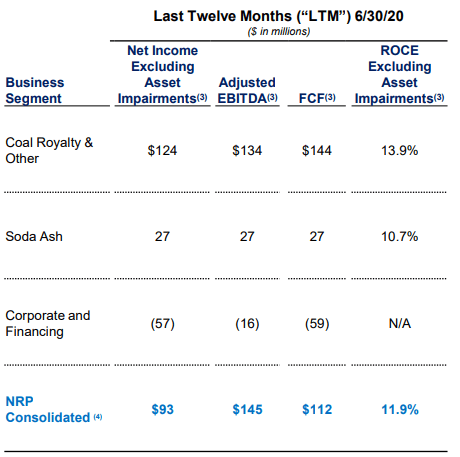 In 2017, Genesis Energy LP, another MLP, bought the soda ash facilities of Tronox (TROX), which had acquired the business only two years earlier from FMC Corporation (FMC). The portfolio consists of 4 mines (all in the Green River Basin), that have a remaining reserve life of more than 100 years at the current production rate.

The soda ash business in Wyoming makes up the brunt of the Sodium Minerals & Sulfur Services segment. The segment is a meaningful part of the MLP’s activities, though energy services (both offshore and onshore) are the main drivers of its performance.

The main purpose of the soda ash acquisition was to provide stability and recurring revenues. Since I am not familiar with the energy side of the business, I will not opine on Genesis Energy LP’s valuation, but those interested will find coverage from other contributors HERE.

Ciner Resources LP has taught me a valuable (though costly) investing lesson: focusing on the strength of a business is not enough. In this case, I was convinced by the cost advantage provided by the exceptional geology of Wyoming’s Green River Basin, and I overlooked the difficulties that could arise from the MLP structure.

I remain invested, though, as I think the upside far outweighs the downside at this juncture. But investors should keep in mind the risks mentioned in this article.

Disclosure: I am/we are long CINR. I wrote this article myself, and it expresses my own opinions. I am not receiving compensation for it (other than from Seeking Alpha). I have no business relationship with any company whose stock is mentioned in this article.

Additional disclosure: The opinions and views expressed in this article are for information purposes only and should not be used or construed as an offer to sell, a solicitation of an offer to buy, or a recommendation to buy, sell or hold any security, investment strategy or market sector.

© Reuters. FILE PHOTO: The Fearless Girl statue is seen as the U.S. flag covers the front facade of the NYSE in New York By Shriya Ramakrishnan and Medha Singh (Reuters) – Wall Street’s main […]