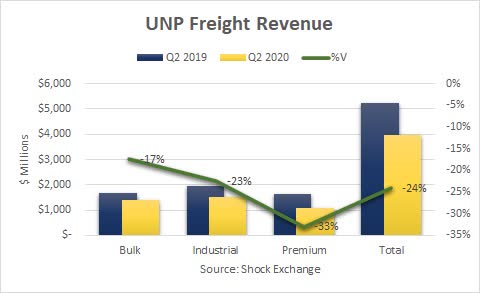 The Bulk segment included coal, grain, food, fertilizer, coal and renewables. Revenue from the segment declined 17% on a 15% decline in carloads and 2% decline in ASP. Coal was negatively impacted by lower natural gas prices and overall softness in the market. General Electric (GE) recently exited the coal power market due to unattractive economics, implying weakness in the market may not abate anytime soon. The pandemic negatively impacted shipments of food and refrigerated products. 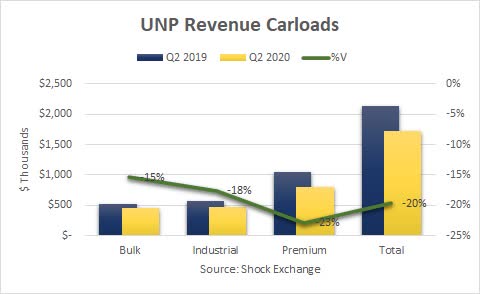 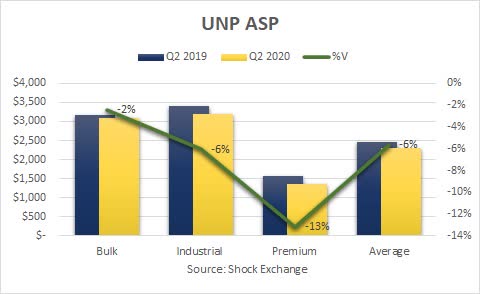 The company was able to hike prices last year. Sans price hikes, revenue could fall in the double-digit percentage range for the rest of the year.

Union Pacific and CSX (CSX) have been the most aggressive in cost-cutting among U.S. railroads. Union Pacific has been delivering operating ratios below 60%, rivaling the efficiency of Canadian railroads. Total operating expenses of $2.6 billion fell down 22% Y/Y. Compensation and benefits expense declined 21% to $905 million, as headcount reductions helped:

“In terms of the different expense lines, compensation and benefits expense decreased 21% year-over-year, primarily as a result of workforce reductions and productivity initiatives. Second quarter workforce levels declined 22% or about 8,600 full-time equivalents versus last year and sequentially decreased 11%.”

The fallout was that EBITDA of $2.1 billion declined down 25% Y/Y. Union Pacific’s EBITDA margin was 49%, down only 100 basis points versus the year-earlier period. The company reported a robust EBITDA margin despite the fall in rail traffic and ASP. The question remains, “Can management keep it up?”

Stimulus from the Federal Reserve and other policymakers have buoyed financials markets. Broader markets have spiked off their March lows; the rebound was likely not based on earnings prospects, in my opinion. The rise in broader markets also helped UNP rebound. UNP has an enterprise value of $160 billion and trades at 15.5x last 12 months (“LTM”) EBITDA. UNP bulls have likely been energized by cost take-outs and the resiliency in the company’s margins. That said, I expect rail traffic to face headwinds until the economy full reopens next year. The valuation likely does not reflect these headwinds.

UNP is up over 25% Y/Y. If Fed stimulus dissipates, then broader markets and UNP could fall. Sell UNP.