Ulta Beauty (NASDAQ:ULTA) has been a stellar performer in the past few months, increasing around 20% since we first started buying it. While this performance is great, it would be wrong to say that we haven’t been tempted to sell several times. Recently, though, our research and recent developments have shown that Ulta still has significant room to grow and is thriving in this difficult retail environment, so we are increasing our bullishness on the stock.

Over the past few years, and even today, Ulta has adapted to the changing beauty landscape, bringing a wide selection of brands to increase selection for customers, and embracing technology and omni-channel retailing, in particular. 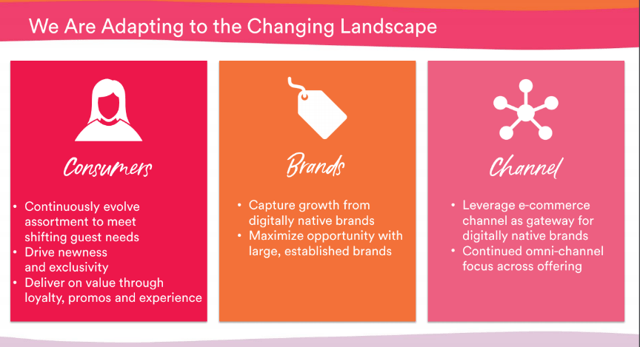 This has allowed Ulta to capture significant market share, allowing it to grow faster than market rates. At some point in the last few years, Ulta overtook Sephora as the number one beauty retailer in the US. 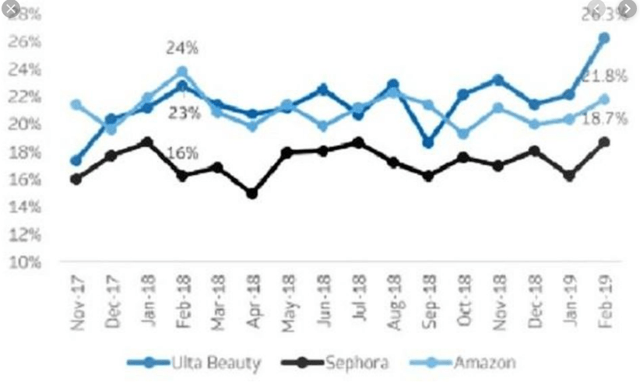 In Piper Jaffray’s most recent Taking Stock With Teens survey, you can clearly see Ulta’s rising lead in the beauty retail space, especially in the teen demographic, with 38% of teens preferring Ulta vs. just 26% for Sephora. This represents a massive shift in preference – Just 1.5 years ago, Ulta was at 28%, and Sephora was at 44%. Ulta’s preference share has increased almost every half year since Piper Jaffray started reporting the data.

It is clear Ulta has a winning formula that consumers love. The constant refining of this formula, along with the large loyalty member base, should allow Ulta to keep its number one spot and continue growing share in the beauty market even with fierce competition from Amazon (NASDAQ:AMZN) and Sephora. Sephora’s loyalty program, for example, only had 10mil members in mid-2017.

Macy’s (NYSE:M) also announced recently that it would be closing up to 29 of its stores around the country, which was widely seen as another sign of the difficulties facing the traditional retail industry. However, Oppenheimer mentioned in a note that many of the Macy’s stores would have Ulta stores nearby, giving a chance for Ulta to capture some of the foot traffic that had previously gone to Macy.

All this shows that despite the fact that foot traffic and margins are falling in retail, Ulta continues to take share, solidifying its position as the number one beauty retailer in the country and allowing it to grow much faster than the market.

We had talked about Ulta’s Canadian expansion in prior articles, but recently, we read an article by Globe and Mail that discussed this expansion in depth. This article mentioned that Ulta had hired a real estate veteran to scout out attractive real estate spots in Canada, signalling that its expansion could happen soon:

Even better, analytics firm Placer.ai also mentioned that Ulta’s Black Friday sales efforts were incredibly successful and drew in strong traffic, with a 300% spike above the average.

What all this shows is that, even in an environment where retailers are struggling, Ulta is thriving and expanding in all directions, giving us additional confidence that its strategy is working.

Recently, a commenter on SA that claims to be an Ulta shopper accused Ulta of having poor customer service. This happens frequently to most retail chains, but since customer experience was widely considered to be Ulta’s best competitive advantage, we decided we had to know whether these accusations were common.

As someone who has been in the market since 1985 and happens to be a very recent, former customer of ULTA, I can assure you that their customer service is lagging and needs refinement.

For the benefit of readers, we look through online reviews and conclude that most customers are actually pretty satisfied with Ulta and its customer service. The site with the most Ulta reviews, Influenster, with over 24k reviews, rates Ulta 4.6 stars, with 74% of the reviews being 4-5 stars. Recent reviews also showed this trend, with the majority of recent reviews we looked at having 4-5 stars. Yes, Ulta has poorer reviews on a few sites like Trustpilot or Consumeraffairs, but these sites only have a few hundred reviews at most. Statistically speaking, most customers at Ulta seem to have a 4-5 star experience.

Ulta’s valuation is not cheap at a 23x PE multiple, but sometimes, you need to pay up for quality, and Ulta is clearly quality. The company’s CEO has presided over many quarters of strong same-store sales growth and the company continues to have an incredibly long growth runway, especially with its increasing share and expansion into international markets.

Overall, it is clear that Ulta, even as the number one beauty retailer, is still taking share and has a lot of room to grow. We continue to be very optimistic about its prospects, especially considering the recent developments, so we continue to be quite bullish on the stock.

Disclosure: I am/we are long ULTA. I wrote this article myself, and it expresses my own opinions. I am not receiving compensation for it (other than from Seeking Alpha). I have no business relationship with any company whose stock is mentioned in this article.