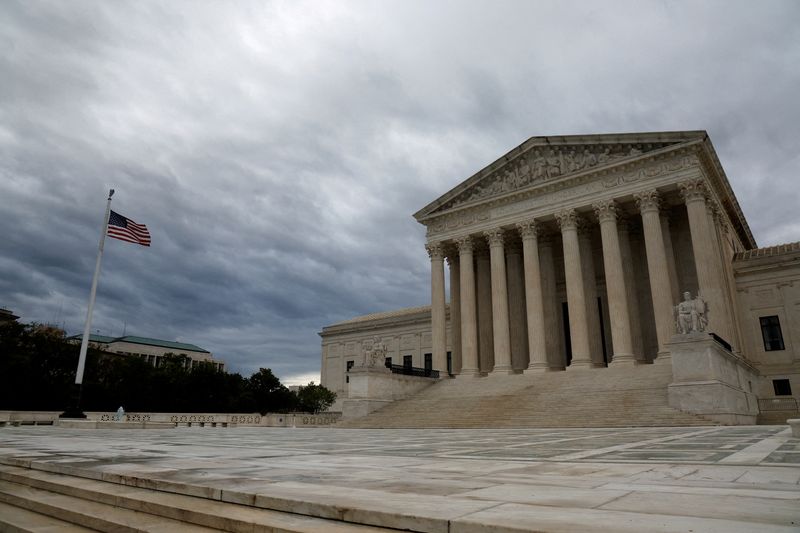 © Reuters. A view of the U.S. Supreme Court building on the first day of the court’s new term in Washington, U.S. October 3, 2022. REUTERS/Jonathan Ernst

(Reuters) – With a backdrop of Russia’s invasion of Ukraine, the U.S. Supreme Court on Monday declined to hear a Ukrainian government bid to avoid paying a $173 million judgment to Russian oil and gas company Tatneft as ordered by a Paris-based arbitration panel.

The justices turned away Ukraine’s appeal of a lower U.S. court’s decision to affirm the judgment ordered by the arbitration panel established by the parties to consider Tatneft’s accusations of Ukrainian wrongdoing over the handling of shares in an oil refinery. Ukraine has sought to overturn the award, which has been upheld in both foreign and U.S. courts.

Tatneft has been in a U.S. federal court in Washington since 2017 seeking to enforce the award. Ukraine has said the matter should not be heard in an American court, adding that Tatneft has not proved Ukraine has any assets in the United States so there is no reason for the matter to be argued in the country. Tatneft has said Ukrainian courts have proven untrustworthy and that arbitration is commonly addressed in U.S. courts.

The United States was not a party to the underlying dispute.

U.S. District Judge Colleen Kollar-Kotelly ruled in Tatneft’s favor in 2020, with the U.S. Court of Appeals for the District of Columbia Circuit in 2021 subsequently affirming the enforcement of the judgment. Ukraine’s lawyers asked the U.S. Supreme Court to take up the case after Russia’s February invasion, arguing that the legal fight should be waged in Ukraine’s courts.

Lawyers representing Ukraine raised Tatneft’s ties to the Russian government and the ongoing invasion in asking the U.S. high court to take up the appeal. They said Tatneft had used the case to target “third parties integral to Ukraine’s national security” ahead of Russia’s invasion. Tatneft has denied those allegations, saying the company was not targeting sensitive information and accusing Ukraine of stonewalling.

The U.S. Justice Department has not yet weighed in on the case, though it raised concerns that Ukrainian documents shared with Tatneft could be passed onto the Russian government. The parties in March, due to the war, agreed to pause proceedings before Kollar-Kotelly that were aimed at identifying Ukrainian assets that could satisfy the judgment.

© Reuters. Here are the biggest fresh dividend hikes and special dividends, as first covered on InvestingPro+, including several predicted by data from Investing.com and StreetInsider last weekend. Get a jump on this week’s likely […]