As 2020 began, U.S. dollar sentiment was loudly signalling a rally, and a rally was what we got. That swing appears be over, however, or nearly over, and a greenback retreat may have now already started.

The greenback peaked in September, 2019, and then steadily lost ground through the end of the year. Come the end of the calendar though, sentiment indicators made a reversal and a strengthening of the U.S. dollar the smart bet.

How compelling was sentiment at the end of December and in early January? Long interest in the U.S. dollar on the Daily Sentiment Index had dropped below 10% – a strong contrarian indicator. At the same time the index showed over 90% positive interest in the euro, the Swiss franc, and the Canadian and Australian dollars, suggesting they were all overbought.

The IG Client Sentiment Index showed over 90% of traders positioned long USDCHF, the U.S. dollar – Swiss franc pair. The IG client index is actually a smart money indicator, however, so such strong positioning supported the long U.S. dollar thesis. And while the pair did go down further first, bottoming on January 16th, the predicted rally started from there.

In fact, the U.S. dollar rallied broadly against major currencies. The greenback had already bottomed at Dec 31st, and save a small dip at the end of January, the U.S. dollar index did what sentiment said it was supposed to do, rise consistently from the beginning of the year till now.

Sentiment-wise, a reversal has now happened. Euro long positioning on the Daily Sentiment Index bottomed just below 10% on January 24th and appears to be completing a double bottom now.

The Swiss franc Daily Sentiment Index numbers dropped as low as 11.9% before rebounding a little, at least as of this writing.

Canadian and Australian dollar Daily Sentiment Index positioning also seems to have bottomed around the end of January or the beginning of February. And U.S. dollar interest went from under 10% long at the end of December, as the rally was beginning, to now being 84.5% long.

There is more pointing to an imminent greenback retreat, or one that has already started. Smart money sentiment in the IG Client Index is positive for every major currency against the U.S. dollar. While these numbers are mostly in the 60-70% long range, they are typical levels at which reversals can happen (remembering that this is a smart money indicator). 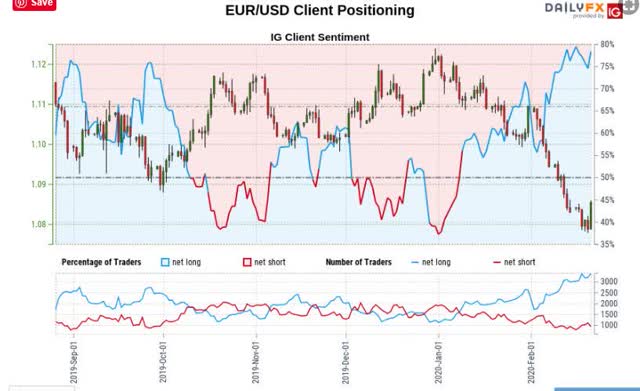 Other proprietary sentiment indexes also point to an upcoming U.S. dollar retreat; one of the more powerful smart money indicators is currently showing 87% short interest in the American dollar.

While it’s impossible to know when a significant turnaround will truly happen, the smart bet is on a weakening greenback, just as sentiment accurately predicted a U.S. dollar advance at the end of the December. Current chart action, in fact, suggests that U.S. dollar weakening may already be underway.

U.S. stock market behavior is a wild card though. As U.S. equities continue to rally despite coronavirus stresses, the chances of a correction remain strong. This correction may have even started already.

An S&P retreat will almost surely strengthen the Japanese yen against the U.S. dollar, but it is more difficult to predict whether the greenback will go up or down more broadly as U.S. equities sell off, especially if U.S. treasuries are bought in replacement. For the moment, the greenback seems to be mirroring U.S. equities and rising or falling with them.

So, as always, tread lightly and ease into positions, and be ready to see the U.S. dollar weaken over the next weeks to months.

Disclosure: I am/we are short UUP. I wrote this article myself, and it expresses my own opinions. I am not receiving compensation for it (other than from Seeking Alpha). I have no business relationship with any company whose stock is mentioned in this article.

Additional disclosure: This article is for information and entertainment only, and not advice to buy or sell anything. Investing comes with a substantial risk of loss. Please be cautious and conduct your own research before putting your capital at risk