Let’s start with the status of the labor market:

The labor force participation rate (left) has recovered about half its drop from the Spring lockdowns, as has the employment/population ratio (right).

While the economy has regained about half of its job losses (left), the pace of establishment job growth is slowing (right).

Here’s a chart of the data:

The above data shows the Y/Y percentage change. Services (in green) is still down Y/Y.

The growth in M/M data has returned to a more normal or standard rate of growth.

Fundamental backdrop: overall, the consumer picture is positive. There’s been solid job growth which has supported a strong uptick in consumer spending. The main problem going forward is that job growth is likely to slow, which will keep unemployment high while potentially denting wage gains.

Despite the good fundamentals, the two primary consumer-focused ETFs are correcting: 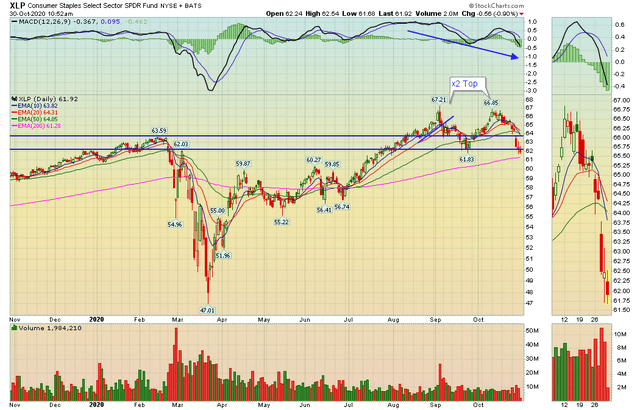 The XLP formed a double-top in early September and mid-October. Momentum is declining and prices are moving lower. Right now, the likely price target is the 200-day EMA. 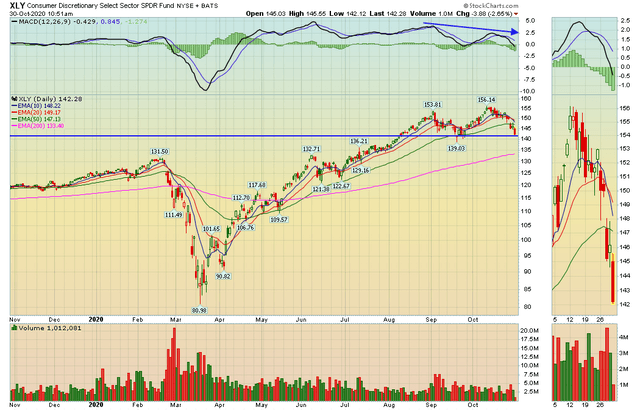 The XLY is also in a correction. Momentum is declining and prices are below the 10-, 20-, and 50-day EMA. The right panel shows that the selling has accelerated this week; prices gapped lower on Wednesday AM and have printed two solid down candles since.

My central market thesis for the fourth quarter is that it will be a very difficult quarter. Most of the easy economic gains are over. And with no additional fiscal stimulus on the horizon, growth will probably slow. The main problem, however, is the large increase in virus cases, which will only escalate during the next few months. This will likely lead to additional lockdowns, quarantines, and partial shutdowns, all of which will lower growth.

Stay on the sidelines for now.