When does the expansion end?

As we all know we’ve not a yet beaten the business cycle. Every economic expansion is going to end just because that’s what they do. However, the normal cause of the end of an expansion is the central bank raising interest rates. We need to keep this in mind because the last one, the one we all remember from 2008/09, is the exception, the one that didn’t.

What happens is that the economy grows like Topsy, then we run out of labour unused to continue to feed the expansion, wages and inflation rise, thus the central bank raises interest rates to kill off said inflation. And, obviously, kills the expansion at the same time.

So, a useful thing for us to do is monitor what’s going on with unemployment. To see if we can spot when we’re going to run out of available labour and thus prepare ourselves for the coming tightening of monetary policy.

It’s worth noting that the past couple of decades we’ve not really seen the above in the UK economy. More specifically, we’ve not seen the wage rises we’d usually associate with the record lows in unemployment. As to why, well, there’s quite a lot of argument about it. If there’s no reserve army of the unemployed then real wages should be rising.

My argument is that the reserve army has been there, it just hasn’t been in the UK. Free movement of labour across the EU has meant it was back home in Krakow and the like. I agree that’s not a popular nor widely held view but I’m sticking with it.

The implication of this is that when we end up without that free movement of labour – the result I expect in about a year’s time when the real rules of Brexit come into effect – then we’ll see the old relationships reasserting themselves.

So, we have the new unemployment numbers:

That’s not much of a change from the previous month:

At some point unemployment at these generational lows is going to lead to inflation – at least, so our standard models would think. However, to get it we need to see wage rises booming and they’re not.

That’s not far off productivity growth which means it’s not all that inflationary. So, what’s happening here? For we’ve added workers to the number employed:

Err, hang on, the unemployment rate isn’t moving down, real wages aren’t moving up much and yet many more people are in work? What’s going on here?

What’s changing is that some entirely not in the labour force at all are joining it. The employment to population ratio is rising: 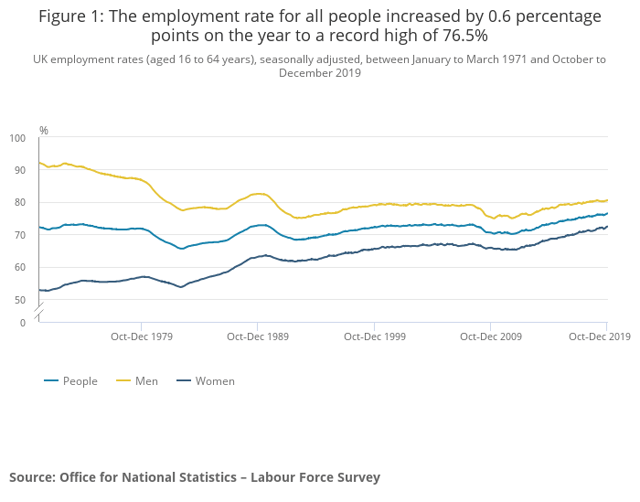 (UK employment to population ratio from Office for National Statistics)

To put this together

U.K. joblessness held steady at 3.8% in the December quarter, in line with the consensus. But the details defied expectations; the number of employed people rose by a sharp 180,000, its strongest in two years, and helped push the employment rate to another record high of 76.5%. Adding to the good news, unemployment fell while inactivity plunged. On the wage front, however, the news wasn’t as rosy. Headline nominal pay growth fell to 2.9% y/y from 3.2%, while regular pay growth slowed to 3.2% from 3.4%.

This is largely what is happening in the American labor market as well. Wages are rising at about the rate of productivity (real wages that is). The unemployment rate is holding pretty steady and the desired extra labour is being sucked in from those formerly economically inactive.

What this means is that the central bank can leave the expansion to roll on for rather longer. We may well have got to what we used to think was full employment when we define it just by the unemployment rate. But that we’re pulling people into the labour force from the economically inactive means that the associated boom in wages and thus inflation isn’t happening.

So, the central bank doesn’t need to raise interest rates to head off the inflation.

I’m very much in a minority when I try to explain why this is happening – it’s the crushing of unions, the freeing up of the labour market in recent decades which has led to this change. That’s probably rather more politics than we need here. For us as investors all we need to know is that it has happened.

The Bank of England can leave interest rates low for longer, allowing the economic expansion to continue, simply because we’ve not got the labour shortages that will lead to a resurgence of inflation.

Leave aside our usual analysis of the UK economy that it’s all about Brexit uncertainty and its disappearance. At a deeper level something has changed in that UK economy. We are at unemployment rates where we’d be expecting to see a resurgence of inflation. And it just ain’t there as yet.

It will come, at some point, and then there will be an induced recession to get rid of that inflation. For us as investors it’s good enough to know that it’s most unlikely to arrive in the next year or so. Thus there will be no change in monetary policy, in interest rates, over that period.

Charley Gallay As we prepare for the latest Disney (NYSE:DIS) earnings release – and the first since Bob Iger took over the company again from Bob Chapek – there are understandably a lot of moving […]