Chinese internet travel site Trip.com Group (TCOM) has been hit pretty hard from the global health crisis, but the stock has been rallying over the last six months and now faces potential resistance from a downwardly sloped trendline that connects the lows for the last three years. You could even argue that the trendline is actually more of an upper rail for a downwardly sloped trend channel.

With the stock rallying over the last six months, the stock has become overbought based on the weekly stochastic indicators and I have to believe the stock is ready for another downward cycle.

While the pandemic has obviously hurt the company, Trip.com’s problems started long before the COVID-19 virus hit. If you notice at the top of the chart, StockCharts still has the company name listed as Ctrip.com. The company changed its name and ticker symbol last November. The issues started all the way back in 2017, at least as far as the stock falling.

The Company’s Fundamentals Have Lagged the Overall Market

One of the main reasons for the trend lower is that the company’s fundamental indicators aren’t as good as other companies. Trip.com has posted losses in each of the last two quarters. It is expected to return to profitability in the third quarter, but the consensus EPS estimate is for $0.16 and that is down from $0.52 in the third quarter of 2019. If we look out to the fourth quarter, analysts expect the company to earn $0.12 per share and that is down from $0.27 EPS in Q4 2019. Q2 earnings were down 182% compared to the previous year.

Looking at the revenue numbers, it was down 65% in the second quarter and it is expected to drop by 49% in the third quarter. Fourth-quarter revenue is expected to show a drop of 37.7% and for the year it is expected to be down 47.5%. Even before the pandemic, Trip.com was only seeing revenue grow by 8% per year.

With the company losing money over the last few quarters, the current return on equity is -3.09% and the profit margin is -11.34%. Even with the current global economic environment, those are some poor management efficiency indicators.

One of the things that I think has helped drive Trip.com higher, as well as other travel-oriented stocks, is the presumption that travel revenues will return to pre-pandemic levels once there is a vaccine available. Personally, I think it is going to be several years before consumers are comfortable traveling as frequently as they used to. Sure, there will be some people that are willing to jump right back on a plane to travel overseas, but there are also people who aren’t going to do that for the foreseeable future. For travel spending to reach the levels it was at prior to COVID-19, the confidence in safety will have to return.

Sentiment Toward Trip.com is Neutral

The sentiment indicators for Trip.com show mostly neutral readings. I would have expected them to show slightly more bearish readings based on the poor fundamentals and the downward trend on the chart. The overall analysts’ ratings are probably the most bearish indicator. There are 34 analysts following the company and 18 have the stock rated as a “buy”. There are 14 “hold” ratings and two “sell” ratings. This puts the overall buy percentage at 52.9% and that is below the average range. 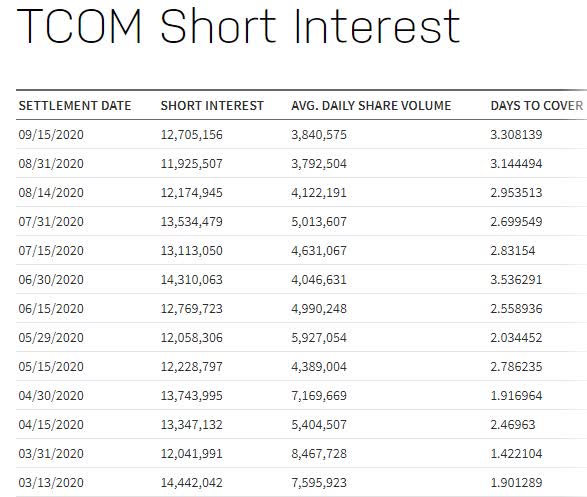 My Overall Take on Trip.com Group

I understand why Trip.com rallied over the last six months. Yes, it rallied with the overall market, and yes, it was tremendously oversold in March. However, the company is still going to struggle to grow earnings over the next few quarters and maybe even for the next few years.

I just think the earnings and revenue declines are too much to overcome right now and the downward trend on the chart is warranted. It looks to me like the stock is ready for another downward cycle. Based on the previous cycles, I see the stock falling in the 30% to 35% range over the next four to five months. If it falls 35% from where it is now, that would put it down near the March low. That area could act as support, and if an investor has a bearish position on the stock, I would certainly consider taking gains at the $20 area.

Four months from now would be about the time Trip.com is set to release fourth-quarter earnings results. As of now, that earnings report is expected to show that the company made money for two straight quarters after losing money for the last two quarters. If that does turn out to be the case and the outlook becomes more upbeat, it could help the stock end the downward cycle.