As I have written extensively regarding the fundamental investment case for both Trinseo and Westrock, my theses, valuation and upside cases, this article focuses on the incremental recent positive developments and the factual and material confirmations that the stories are playing out precisely as anticipated. Moreover, while these companies have seen significant appreciation in the past two quarters, the share prices remain dramatically below fair value, and do not reflect the current pricing trends and free cash flow that these companies will generate during the course of the next year.

Trinseo’s positive preannouncement pushed the stock solidly into the low $30s, but the math suggests it should already be dramatically higher – the stock should be double current levels conservatively. Let’s take a look at TSE relative to its key commodities. Styrene is about 18% of normalized EBITDA so even if you assume it is zero, if you mark TSE to market with the remaining 82% of the portfolio, the should already be comfortably above $65 based on this mathematical extrapolation…and if you add the self-help measures coming in Q4, mark to market the stock should already be $78 per share.

As if the other divisions beating expectations weren’t enough, here you can see that even the styrene business is hitting an inflection hard. The biggest bear on the Street remains Morgan Stanley. Their analyst said spreads were going to roll over hard in Q4 – the exact opposite is happening.

From Platts from last week – all regions are now higher on a spot price basis. 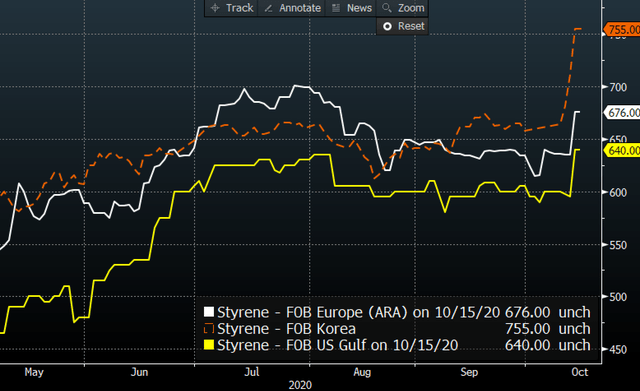 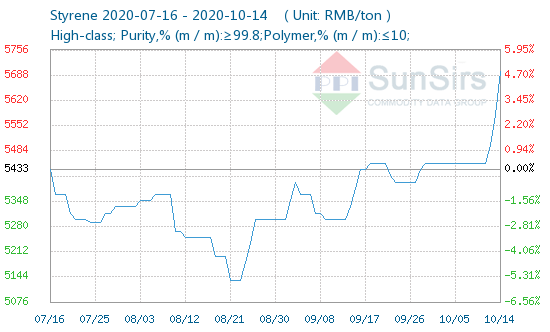 As I mentioned earlier, the bearish stance of the analyst community most prominently by Morgan Stanley and their report following the TSE pre-announcement highlights this. The amount of reverse financial engineering to try to justify a ludicrously low price target is simply mind-boggling. Even Goldman Sachs published a report discussing the strong recovery in miles driven (down 6% in September) but Morgan Stanley still reminisces about the weakness in March when COVID first hit. We are obviously well beyond the initial shock when fear, lockdowns and panic took hold. That notwithstanding, the note then argues that oversupply in latex from paper demand despite Synthomer taking out over 10% of capacity (announced last week) should be the focus. Finally, let’s address the negative stance on styrene. I will point to two things: 1. They clearly have not looked at spot prices in Asia for the last two weeks, and, 2. There is clearly a lack of understanding with regard to how commodity pricing works. They claim pricing will fall due to some incremental capacity that is coming on in Q4. In commodity markets, the commodities price in the new supply 6 to 9 months ahead of the supply actually ramping. Like I have said many times, the sell-side tends to only focus on the rearview mirror, and has a severe impairment doing the math with likely future developments in mind. It is also worth mentioning that the consensus bearish outlook on autos is inconsistent with what companies are saying. Alcoa reported last week and mentioned they expect auto production for Q4 to be +3% in the US and +6% in Europe. This is significantly higher than expectations embedded in chemicals, particularly for TSE.

At least when TSE’s main competitor Synthomer (SYNT LN) beat and guided higher – the stock surged higher by 20%. It is encouraging that Alembic Global Advisors and Jeffries had the foresight to upgrade Trinseo to a “BUY” well in advance of the Q3 upside preannouncement. And even perma-bear Morgan Stanley could no longer justify their $14 price target, and upped it nearly 50% to $20. As I mentioned when Trinseo was near its lows in the upper teens, the sell-side likely won’t capitulate to the upside until Trinseo moves past $40. I suspect when the company reports during the first week of November and provides a greatly improved outlook, we will start to see more upgrades and price targets conservatively in the $50-$60 range. It is simply the way of the sell-side.

While Trinseo remains my highest-conviction idea and I have little doubt the stock will ultimately exceed $100 per share, since even the most concentrated investors need multiple companies in which to invest, it is worth mentioning that Olin (OLN), Capri (CPRI) and Westrock (WRK) remain very compelling. For this article, I am highlighting TSE and WRK.

In China, talk was that this year’s ban on any imported old corrugated containers changed the supply-demand situation for containerboard buyers and box makers in China. As a result, one contact said “demand was stronger” than expected. China’s buying of US kraft linerboard had been up by about 90% through August. The trade war helped stifle China’s demand for US kraft linerboard in 2019, but demand in China has turned way up this year.

There has been a lot of positive data this week on WRK, but this is the most important one. Industry-focused “RISI” has indicated the global tightness, and specifically in China and LatAm. I have been saying that in addition to the acceleration from e-commerce, we are getting to the point where China is going to have to import large quantities of containerboard from the US, and we can now see this is starting. While collectively the sell-side analyst community continues to focus on supply and demand in the US (and this is also tightening), what matters most is global supply and demand. China is going to need to import 8 million tons of containerboard by 2023, compared with ONE million now. The US containerboard market is just over 40 million tons. The myopic sell-side collectively wrings their hands regarding a new plant with capacity of 300k tons, when the incremental demand from China will be 7 million tons per year, which is close to 20% of US capacity. And US linerboard producers getting traction on global pricing. It does not require a genius to do the math and conclude what this means for WRK with regard to pricing.

As I mentioned above, there has been a lot of news for WRK shareholders to celebrate. Very strong trends persist in LatAm containerboard, consistent with recent anecdotal commentary from RISI, and supportive of rising global export pricing. Recall Brazil Cardboard Sales increased 8.1% y/y in August. Bloomberg indicated the Brazilian cardboard agency said in e-mailedstatement. Compares with +8.2% y/y in July and a sales increase of +3.2% m/m to 346k tons. A huge recovery in LatAm corrugated demand, now running +15% yoy in September indicated by this story –

Brazilian corrugated board shipments move up for the fourth consecutive month

SAO PAULO, Oct 20, 2020 17:03:02 (PPI Latin America) – The latest data released by the Brazilian Corrugated Board Assn (ABPO) shows that shipments in the country continued at a strong pace in September, the fourth consecutive month of growth. Year-over-year, shipments in September are up 15.4% at 351,193 tonnes. The figure is also 1.5% higher than August, showing continued recovery after the impact of the COVID-19 pandemic in Brazil.

Likewise – we saw stories from Brazil, Mexico and around the globe in general.

SAO PAULO, Oct 20, 2020 16:51:04 (PPI Latin America) – Containerboard producers in Mexico announced to clients the intention to move ahead with price hikes for recycled linerboard and medium in the coming months. Most companies will attempt to raise prices by 400-600/tonne Mexican pesos through November or December, sources told PPI Latin America, but there are also talks of up to peso 1,000/tonne increases.

While I believe it is highly unlikely given the global reset from COVID-19, for the scenarios I anticipate to see TSE, WRK, OLN and CPRI move to much higher levels, the following events might impede this from playing out.

2.) Global recession where spending effectively comes to a halt and the consumer reduces purchasing and consumption dramatically.

3.) Global altercations with the usual suspects

It is clear. The key drivers for Trinseo and Westrock are improving significantly, and the sell-side is asleep at the wheel. For investors, these opportunities to purchase shares of TSE and WRK at grossly underpriced levels present abnormally high return potential and should not be missed. The data is there for those who seek it and piecing together the pieces with a bit of foresight is providing a great chance for investors to own some very safe and reliable companies who are paying a very nice dividend yield. And you can expect when the companies report earnings to hear some incrementally positive news that has not already been spelled out to the media. And imagine, if the sell-side finally conducts some forward-looking analysis and begin to encourage investors to reach down and grab the cheap stocks right in front of them. Don’t let fear or backward-looking analysis dissuade you from the great opportunity of buying TSE and WRK and these levels, which will look silly in another quarter or two.

Disclosure: I am/we are long TSE, WRK. I wrote this article myself, and it expresses my own opinions. I am not receiving compensation for it (other than from Seeking Alpha). I have no business relationship with any company whose stock is mentioned in this article.