One of the striking observations within G10 rates markets over summer has been the aggressive (and persistent) discounting of lower interest rates in the UK – more so than any other developed economy in the world. This comes despite the Bank of England’s general reluctance to go down the path of negative rates. We assess and validate the potential reasons as to why investors think that the UK economy, in particular, may require additional monetary stimulus over the next 12 months.

Since May 2020, short-term interest rates in the UK (as proxied by 1y1y forward rates) have fallen by more than their equivalent in any other developed market. We assess and validate the four reasons as to why we think there is greater pessimism over the post-pandemic UK economic recovery: (1) Brexit uncertainty; (2) the DNA of the UK economy; (3) a more vocally dovish Bank of England; and (4) a possible early reversal of fiscal stimulus.

It could be argued that all of these UK-specific factors combined explain the greater dovish bias in UK rates markets. We don’t have enough evidence in soft or hard economic data yet to justify that the UK economy will be laggard in the post-pandemic recovery. Instead, forthcoming data points could materially impact the assumptions that forward-looking rates markets are currently pricing in.

Asset Allocation Views: We wouldn’t rule out a shift higher in the front-end of the UK rates curve – and one that supports GBP crosses (especially against EUR and AUD where relative monetary policy expectations may start to move in the opposite direction). A slightly stronger pound may also favour domestic UK equities over internationally-exposed stocks in portfolios – especially if the UK economy rebounds quicker than markets currently anticipate.

Why Do Markets Have Greater Conviction Over Lower Policy Rates In The UK Relative To Other Major Economies?

Since May 2020, short-term interest rates in the UK have fallen by more than their equivalent in any other developed market – with 1y1y swap rates moving around 22bps lower (Fig. 1). In absolute terms, the 3m1y spread in the UK is the second lowest across G10 rates markets (only New Zealand has a more inverted curve at the front-end). We think the relative pessimism expressed in the UK rates market may be unjustified when assessing the potential reasons for why this may be occurring. Therefore, we see risks of a repricing higher across front-end UK rates – that may also lend support to GBP crosses (especially against EUR and AUD).

In this note, we assess and validate in more detail the four reasons as to why we think there is greater pessimism over the post-pandemic UK economic recovery: (1) Brexit uncertainty; (2) the DNA of the UK economy; (3) a more vocally dovish Bank of England; and (4) a possible early reversal of fiscal stimulus.

1. Pessimism over the UK economy – is it just as simple as Brexit trade deal uncertainty?

There’s no doubt that uncertainty over a Brexit trade deal by year-end is a cloud hanging over the UK economy. But it’s hard to see why this uncertainty on its own justifies expectations for a Bank of England rate cut over the next year.

First, the shock of a cliff-edge Brexit would be a fraction of the damage that has already occurred due to the nationwide lockdown earlier this year – and whilst it would inevitably slow the UK economic recovery, a marginal Bank rate cut won’t add much impulse given that demand is already at historically weak levels and interest rates are at record lows. Instead, the negative supply-side impact of a cliff-edge Brexit – and a much weaker trade-weighted pound – may put upward pressure on UK inflation expectations. This makes the policy decision in the event of a cliff-edge Brexit much harder for the Bank of England – and we don’t think UK rates markets are adequately reflecting this trade-off.

Moreover, the real economy seems to be more concerned about dealing with the post-pandemic transition – rather than Brexit headline risks (which are more of a constant these days). The Bank of England’s Brexit Uncertainty Index fell quite substantially in July – with only 2.5% of UK businesses seeing Brexit as the largest source of uncertainty right now (the latest data for August shows a small uptick in this index – see Fig 2). Unless no-deal Brexit becomes official government policy, the outlook for UK business investment will be primarily driven by COVID-19 factors – with Brexit more of a marginal factor.

Equally, financial markets are not currently pricing in the ‘classic’ no-deal Brexit risks (e.g., commanding a premium for downside GBP protection and higher UK inflation breakevens) – which suggests that Brexit is not the main (or only) reason for why UK rates have been moving lower over summer (Fig. 2). 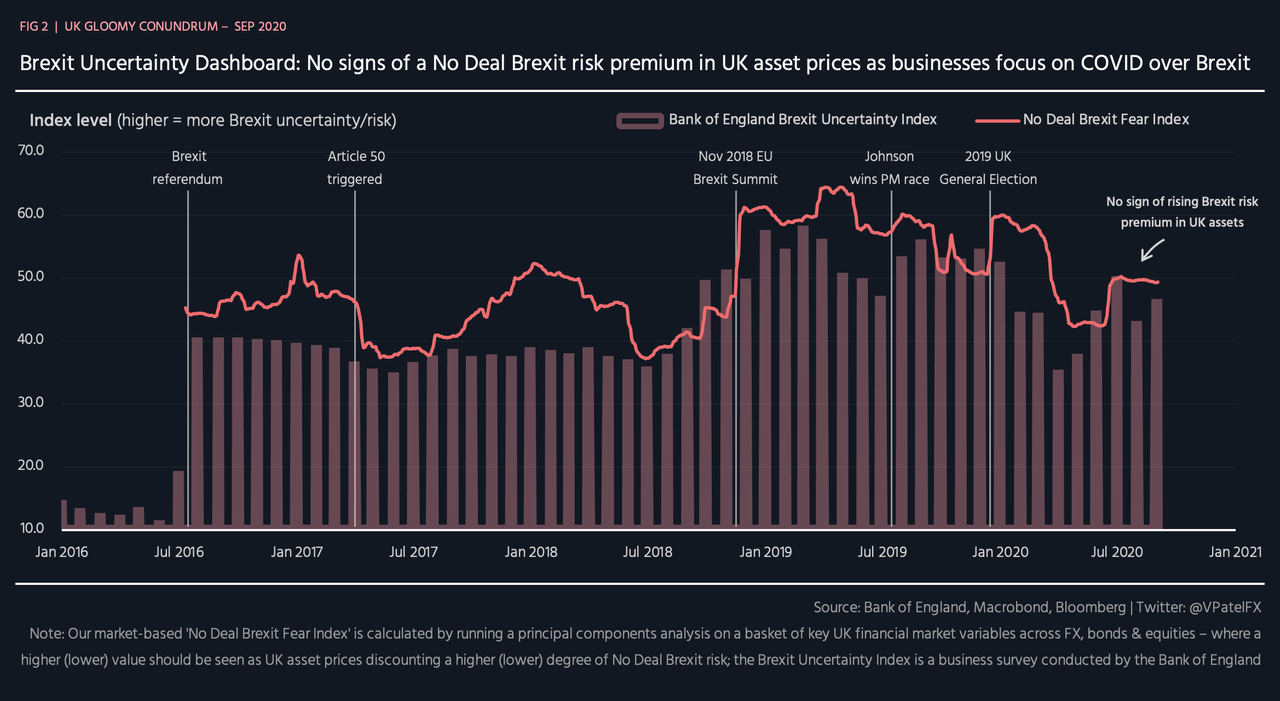 2. The DNA of the UK economy makes it more vulnerable in a lockdown recession – but this is not enough to discount a slower recovery?

The services-oriented UK economy remains particularly vulnerable as we adjust to a more socially-distanced world – especially as relative to its peers, the UK has one of the highest contributions of ‘social consumption’ to GDP according to the Bank of England.

However, this alone is not enough to discount a slower UK economic recovery. Indeed, the social environment in individual countries is changing rapidly – places like Australia and New Zealand have seen national lockdown measures sharply increase in recent weeks (albeit from a lower base over summer), whereas the UK has had a very steady decline in lockdown restrictions in recent months (Fig. 3 – middle panel). The way in which these different ‘unlocking’ approaches feeds through into consumer activity is a big unknown – but we don’t think it necessarily means that the UK economy is going to be worse hit than other G10 countries over time.

Moreover, the post-pandemic behaviour of consumers is differing materially across countries – and not necessarily in line with the initial health impact of the virus. When also assessing factors like financial worries and the fear of job loss, surveys show the UK consumer may not be the most ‘fearful’ amongst its peers (Fig. 3 – LHS & RHS panel). Again, how this feeds through to hard spending data is also a question mark – but, for now, there’s little evidence in survey data to suggest that UK consumption will be significantly slower to recover than elsewhere.

The bottom line is that we don’t have enough evidence in soft or hard economic data yet to justify that the UK economy will be laggard in the post-pandemic recovery. Instead, forthcoming data points could materially impact the assumptions that forward-looking rates markets are currently pricing in. 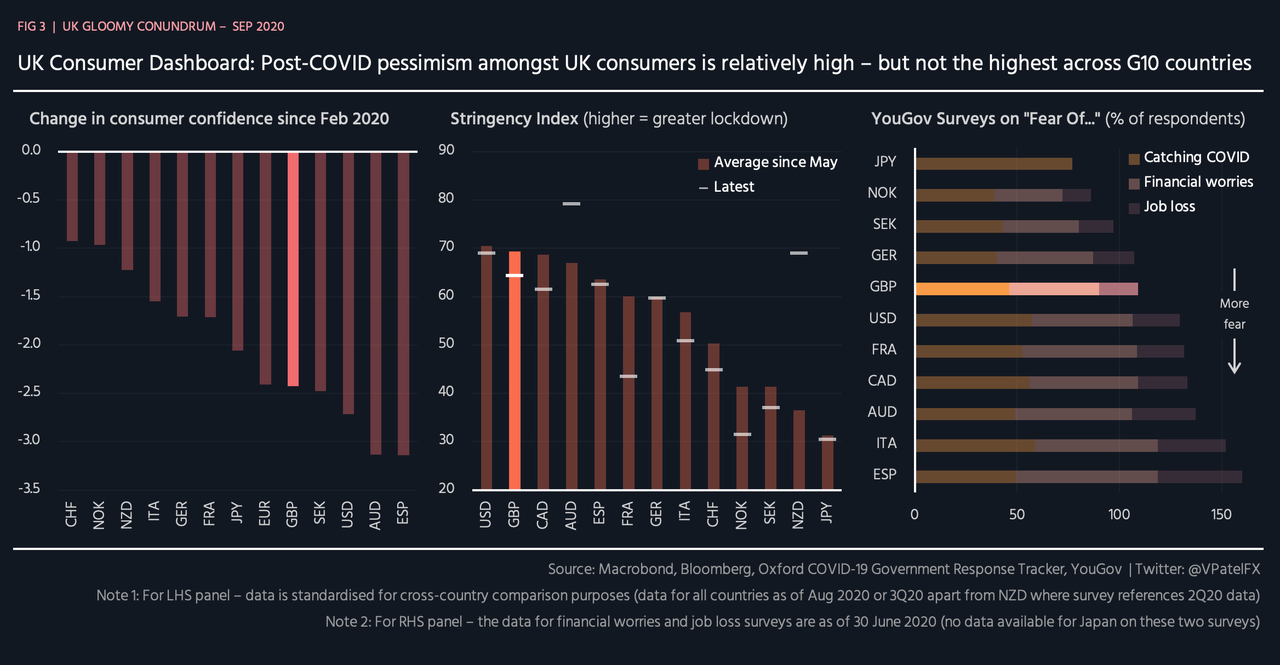 3. Bank of England has been more vocal about further easing in this cycle – although still an extremely high bar for negative rates

Given the Fed and the ECB have been less vocal about lowering policy rates from current levels, the slightly more vocal BoE could be part of the reason why front-end UK rates trade with a slightly more dovish bias.

Since the August MPC meeting, the Bank has also transitioned to a much lower weekly pace of gilt purchases (Fig. 4) – potentially as it looks to wean UK bond markets off the extraordinarily rapid pace of stimulus in the post-crisis period. The BoE’s relatively lower reliance on its balance sheet as a monetary policy tool could also be a reason why markets are more aggressively discounting lower policy rates in the UK. However, we do think this argument is slightly flawed – and believe that an increase in the pace QE purchases still remains the preferred marginal policy tool in almost all scenarios (especially a Brexit-related sell-off in UK assets).

Unlike in Europe, market-based UK breakeven inflation expectations have remained fairly steady since the pandemic crisis (Fig. 4) – meaning that there is little reason for the BoE to be relatively more concerned about its policy credibility than other G10 central banks. Instead, the ECB may have a bigger inflation credibility problem right now (not least given the future impact of a stronger EUR).

Overall, it doesn’t appear that the UK’s future monetary policy path will be materially different from the likes of the Fed or the ECB – especially when it comes to short-term interest rates. However, a potential shift in policy sequencing – such that bank reserves are reduced first before hiking rates – may warrant a slightly flatter front-end curve in the UK relative to the US. 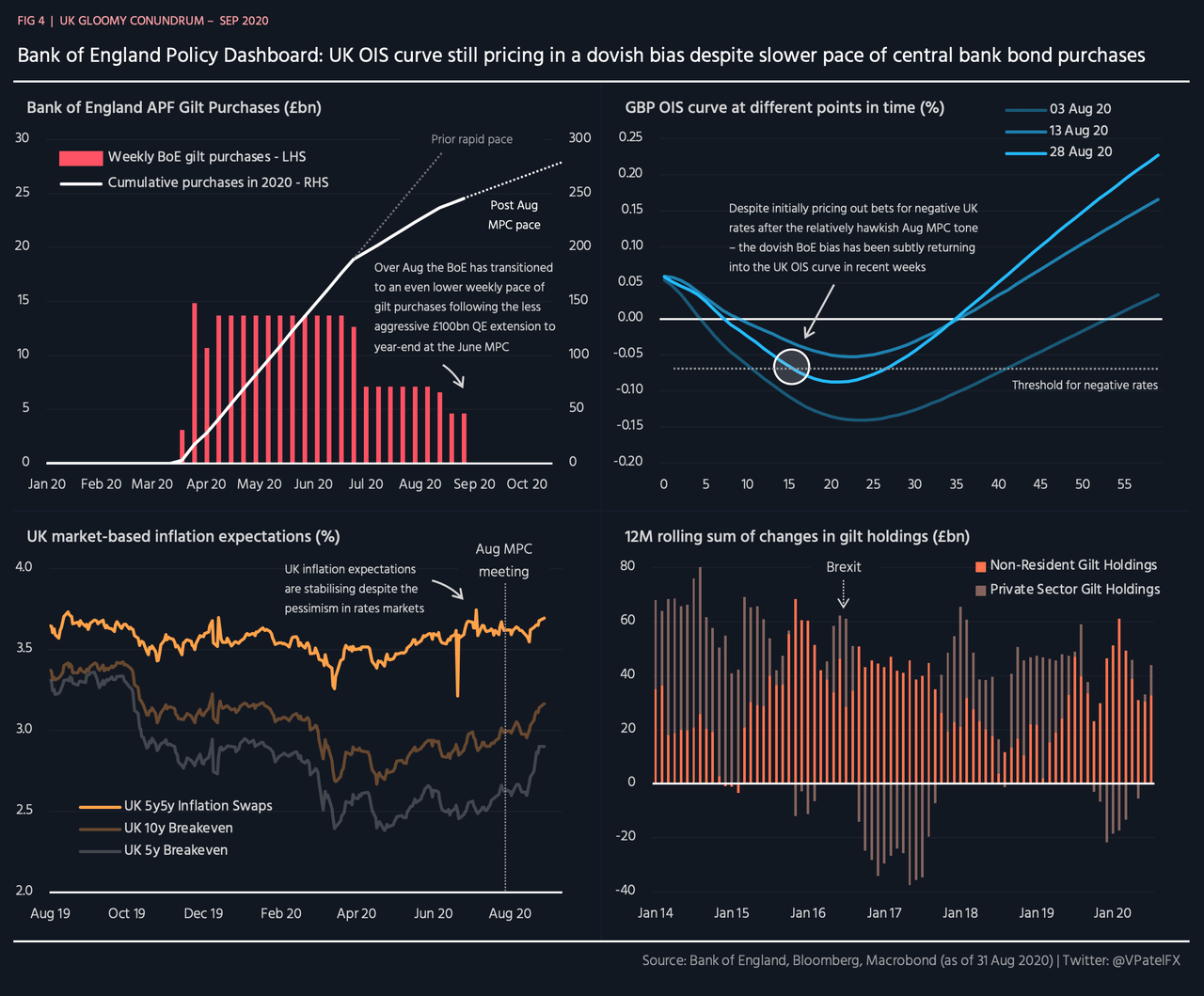 4. Will we see a faster reversal of COVID-19 fiscal stimulus in the UK?

Most of the talk in recent weeks has been around the unwinding of the post-pandemic emergency fiscal stimulus that has been in place to support the UK economy. Whilst countries like Germany have extended their furlough scheme – there is much debate over whether Chancellor Rishi Sunak will do the same in the UK.

The recent narrative in the UK has been around introducing fiscal austerity measures like tax hikes to pay for the post-crisis fiscal spending. The timing of this is still up for debate – but the fact that we’re already discussing a reversal of fiscal stimulus in the UK may affect how one assesses the outlook for the post-COVID UK economic recovery. If monetary policy is needed to ‘do more’ to support the economy – then there may be a sound argument for markets to expect relatively lower rates in the UK versus other G10 countries.

We think it is a bit too early to make this assumption – at least on a relative basis – and the challenge of ‘paying’ for the post-pandemic fiscal stimulus will be one that all highly-indebted G10 countries will face. Unless we see a material divergence in the path of fiscal policy in the UK and its peers over the coming months (such as earlier consumption or wealth tax hikes) – then this is not a factor that justifies a dovish bias in UK rates markets.

“The whole is greater than the sum of its parts” ― Aristotle

It could be argued that all of these UK-specific factors combined explain the greater dovish bias in UK rates markets. However, as we aim to outline above, the assumptions that UK rates markets are currently making may be fairly insubstantial in their nature – and could change quite quickly over the coming weeks and months.

We wouldn’t rule out a shift higher in the front-end of the UK rates curve – and one that supports GBP crosses (especially against EUR, NZD and AUD where relative monetary policy expectations may start to move in the opposite direction – see Fig 5a). A slightly stronger pound may also favour domestic UK equities over internationally-exposed stocks in portfolios (given the negative correlation here as shown in Fig 5b) – especially if the UK economy rebounds quicker than markets currently anticipate.

Written by Nick Ackerman, co-produced by Stanford Chemist SoFi Weekly Income ETF (NYSEARCA:TGIF) was very recently launched at the start of October of this year. They have the ambitious goal of trying to provide weekly […]