After several weeks of virtually non-stop bad news, finally there is light at the end of the tunnel. The equity market is slowly strengthening as investors sift through the recent wreckage in search of bargains, and even plunging oil and commodity prices are showing signs of stabilizing. In this report, I’ll show that the three major developments needed for an equity bull market to resume are taking shape, including falling volatility, rising oil prices, and diminishing new 52-week lows.

A “virtual” meeting between OPEC and its members was postponed on Monday as tensions between Saudi Arabia and Russia increased, according to press reports. The meeting will likely be held on Thursday, with analysts predicting that oil prices will “crater” in response to the strained relations between both countries. This hasn’t been the case so far, however, as the crude oil price was down only 2% on Monday before bouncing nearly 1% in overnight trading heading into Tuesday’s session.

Despite the dire forecasts, the oil market appears to be looking past political friction among the leading oil producing nations and is instead focused on the prospects that economic activity will pick up again in the coming weeks. The first signs of stabilization of coronavirus cases for Italy and New York buoyed trader sentiment to start the week and the market is anticipating that the economic downturn won’t be as bad as analysts have predicted.

Last week’s 38% rally in the WTI crude oil price was a welcome development for those who fear that deflation threatens to severely undermine the global economy. It also marked the first time since February that the WTI oil price managed to close decisively above its 15-day trend line – no small feat considering this has been the worst energy market environment since the late 1990s (when the commodity market also faced a deflationary threat).

More pertinently, a continued rebound in oil prices should be good for the equity market. As I’ve recently emphasized, we’ll likely see some additional spillover strength in the stock market from a rallying crude price since investors are looking for a reason to buy again. Indeed, a sustained rise in oil prices would almost certainly give investors the confidence needed to return to equities on the assumption that what’s good for oil is good for the global economy.

Oil’s recent gains were enough to give traders the confidence to buy stocks, as evinced by Monday’s 7% rally in the S&P 500 Index (SPX). The S&P has now closed two days higher above its 15-day moving average, which confirms an immediate-term (1-4 week) bottom signal per the rules of my trading discipline. Moreover, if the SPX closes anytime this week at the 2690 level, it will have rallied 20% from its March 23 closing low of 2,237 thus confirming that a new bull market has technically begun. The Dow Jones Industrial Average (DJIA), meanwhile, has risen 22% from its March low and has already confirmed a new bull market. 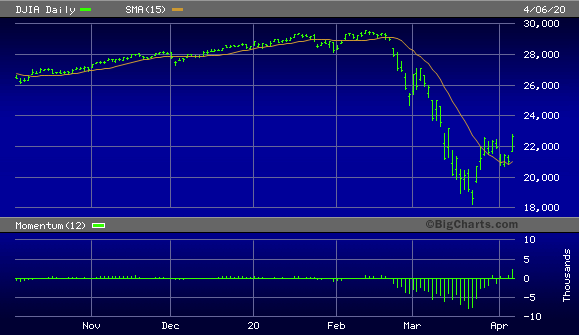 A couple of other technical developments lately have provided a context for being optimistic in the near term. The first was the CBOE Volatility Index (VIX) falling decisively under the 50 level to its lowest level since early March. This was one of the factors I’ve insisted was needed before the bulls could jump in and take control of the near-term trend. Obviously, the more declining days we see in the VIX from here, the more conducive it will be for a sustained market recovery. 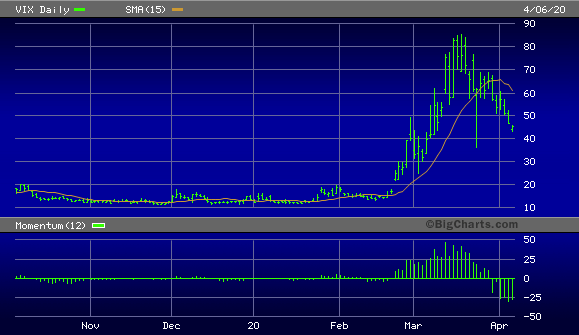 By far the most notable improvement in the broad market is taking place below the surface where most people aren’t looking. Specifically, the number of NYSE-listed stocks making new 52-week lows finally fell below 40 on April 6, hitting its lowest level since several weeks before the crisis began. While we still need to see a few more days of below-40 new lows, this was an extremely welcome sign that internal selling pressure has drastically declined. While it isn’t quite there yet, the market is slowly returning to a normal, healthy condition as institutional investors begin pricing in the likelihood for a fast-paced economic recovery to begin once the coronavirus threat has dwindled.

As I’ve emphasized in past reports, the new 52-week highs-lows is the most important indicator for gauging the incremental demand for equities, and the recent improvement in the highs-lows is definitely good news for stocks. Below is the 4-week rate of change (momentum) of the NYSE new highs and lows, which is also my favorite way of measuring the near-term path of least resistance for stock prices. As you can see, this indicator is beginning to accelerate higher – and notwithstanding the occasional news-related volatility that will periodically occur – it will make it easier for the bulls to take charge in the days ahead. 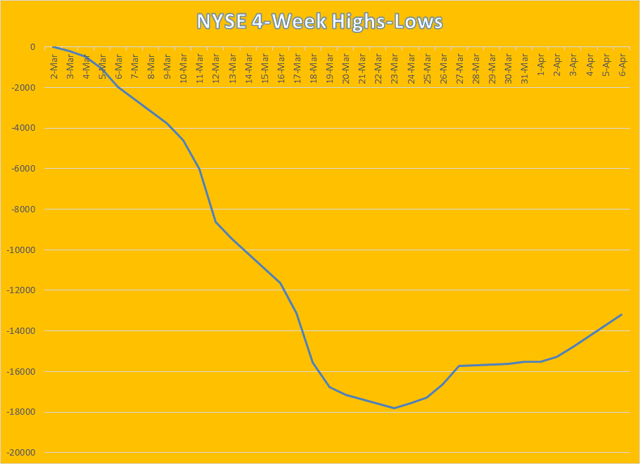 The three conditions I’ve insisted should be met before a significant equity market bottom is in place are gradually being met. They include a rising oil price, falling broad market volatility and improvement in the momentum of the 52-week highs and lows. We also have a confirmed bottom signal from both the Dow and SPX in the form of a 2-day higher close above the 15-day moving average.

On a strategic note, participants should focus on taking advantage of bargains in the strongest areas of the market, notably the gold mining and info tech industries. For now, however, selectivity and conservatism are still paramount considerations until broad market volatility subsides even further.