Let’s start with an overview of the economic and market data.

All of this information is from my Friday Technically Speaking, International Economic Week in Review, and Bond Market Week in Review columns. Please see each for additional data.

Next, let’s look at my three model portfolios:Data from Finviz.com; author’s calculations. Green means in increase, while red means a decrease. The first number in the left column is the SPY or VEU percentage, while the second number is the TLT or BNDX percentage. If you’re more conservative, opt for the higher TLT or BNDX percentage portfolio. If you’re aggressive, reverse the process. The bottom portfolio has 25% of each ETF.

This week’s overall market action really shows the benefit of this portfolio concept. While the SPY was down, the TLT was up; portfolios with a higher treasury market allocation were actually higher due to the flight to safety. The international portfolio (middle rows) shows a similar pattern: a higher concentration of bonds minimized the losses. Yes, maintaining a position in bonds full time does lower overall gains; but in down markets, it really helps investors sleep at night.

Next, let’s take a look at the performance of all the broad ETFs I track for this column:

Here are the 2-month charts of the broad bond market ETFs I track:

All are rising. I’ve included the PFF because it’s very bond-like in its performance.

Here are the equity charts:

All are in a correction.

Bottom-Performing Aristocrats for the Week of 1/27-1/31

Now, let’s turn to the recommendation portion of the newsletter, where the current market sell-off allows me to make a few key observations using pithy investment quotes. Let’s start here:

About half of a stock’s movement is derived from the broad market; another 25% is from its sector and the remaining percentage is the company itself.

I forget where I first heard the above quote (if you know, please place a link in the comments), but it really rings true. There is no point buying a majority of companies when the market is in a sell-off. Why? Because “a rising tide lifts (and sinks) all boats.” Yes, it might be a great company. But when the market is trending lower, it’s more than likely that the downward momentum will hit the company’s share prices. Wait for the market to bottom out and then buy. As I noted in my Friday market wrap, we’re in a downtrend. It’s best to hold off on buying until the sell-off is over.

To a large extent, aristocrats are a self-selected group of companies; they are older, mature businesses with a proven track record of rewarding shareholders. Their commitment to annually increasing their dividend means they have to manage their company in a certain way. That means we should expect a solid, fundamental picture when we look at their financials.

But their respective charts tell us when to buy, and when to sell. Over the last 6-9 months, most of the aristocrats have been rallying with the broader market. Some are now clearly in a correction, which means, it’s time to sell them. That does not mean they’ve suddenly become a bad company. It does mean it’s time to book a profit and move into another investment. Why? Here’s my final trite investment quote:

No one ever went broke taking a profit.

If a chart has run its course, take the technical hint. Do what a majority of investors don’t do: sell high. There are always opportunities around the corner.

I started this newsletter at the beginning of the year and have only made three recommendations: SKT, HP, and WST.

I love Target (TGT). My wife and I shop there regularly. The company has recovered from its Canadian problems and data hack controversy pretty well. Gross revenue and net income have increased in three of the last four years. Its debt position has remained stable since 2015 and it has ample cash flow to fund current operations. It has a very safe dividend payout ratio of 40.9%.

The problem is the chart is saying “sell:” 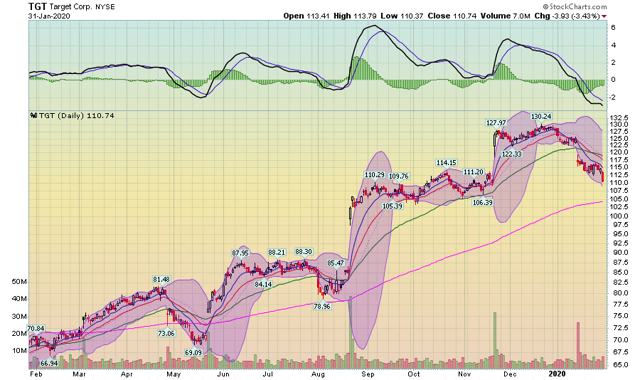 Target had a great 2019; it gapped higher three times and rose from a low of $66.94-130.24 for a total gain of 94.5% – which is one heck of a run for a dividend aristocrat. But the stock gapped lower in mid-January and has trended lower the last two weeks. This chart has plenty of downward room to run. If you bought Target over the last 12 months, you’ve made a great profit. Take some or all of it off the table.

AbbVie is another great company. Unlike most aristocrats, it has solid earnings growth; sales have increased strongly over the last five years. The company has been issuing a lot of debt; the debt/asset ratio has increased from 38% in 2014 to 59% in 2018. This isn’t fatal, especially in a zero lower band world. The company has plenty of cash to fund ongoing operations.

The problem (again) is that the chart is starting a correction: 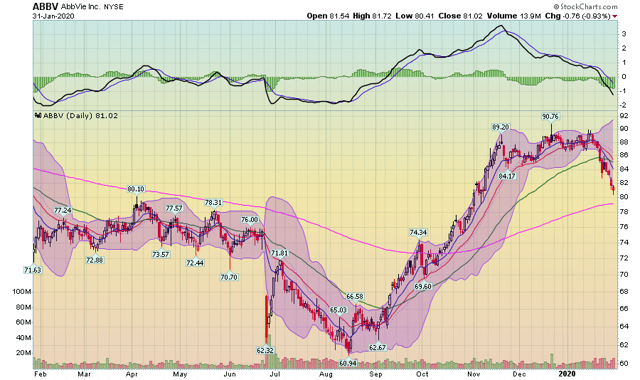 The stock had a great run from August through December, rising nearly 50%. But, like Target, the stock has gotten caught in the downdraft and is currently in a correction. If you’ve made money, take some or all of it off the table.

Back when I was a bond broker, I had a great client who taught me a tremendous amount about investing. When he didn’t buy something, he always said, “there’s always another deal around the corner.” He was right; if you’re patient, opportunities will emerge. And the above sell recommendations will be buys at some point (assuming they keep raising their dividends). But for now, book some profits and build some cash.

Disclosure: I am/we are long PFF. I wrote this article myself, and it expresses my own opinions. I am not receiving compensation for it (other than from Seeking Alpha). I have no business relationship with any company whose stock is mentioned in this article.

Additional disclosure: I don’t have a professional relationship with the reader. These are not buy or sell recomendations for any individual investor. Read other analysts to get a different opinion. You’re investing at your own risk.

© Reuters. Here are 7 head-turning deal dispatches from the past week, as covered first on InvestingPro+. 1. Arco Platform (NASDAQ:) announced it had received a non-binding going private proposal from General Atlantic and Dragoneer […]