Following Dynatrace’s (DT) solid F2Q21 results and subsequent lackluster stock performance, we recommend investors stay invested in the stock, as Dynatrace is the best asset in the Application Performance Monitoring (APM) market. As enterprise applications move to the cloud and use newer technologies such as containers, microservices, and serverless computing, the complexity of the software stack is increasing exponentially. On top of this, many enterprises are using multiple public clouds and running applications on-premises data centers in what we call a hybrid multi-cloud architecture. This hybrid multi-cloud architecture, along with newer technologies such as containers, increases the complexity of the overall technology stack. To troubleshoot and identify bugs with this new technology stack, Dynatrace is the best bet. Therefore, we are highly confident that Dynatrace will continue to outgrow competition for the foreseeable future. On top of this, the valuation is also reasonable making Dynatrace one of our favorite names in Observability/Monitoring markets.

Digital transformation is a tailwind to revenue growth

CEO John Van Siclen sums up Dynatrace’s business and its opportunity by noting the following:

We recently commissioned a study of 700 CIOs, primarily from $1 billion-plus enterprise companies and almost 90% of them agreed, digital transformation has accelerated in the last 12 months. And nearly 60% felt they will continue to accelerate into the future. As digital transformation accelerates, so does the scale and complexity. 86% of CIOs said they’re using modern architectures, which include cloud-native technologies and platforms such as Kubernetes, microservices, and containers. As the use of these technologies grows rapidly, customers see massive increases in complexity, dynamism, and frequency of change. The volume, velocity, and variety of data produced by these environments are growing exponentially, and the importance of these cloud ecosystems and the applications that run on them function flawlessly has never been greater. And interestingly, of the CIOs surveyed, 63% now say that the complexity of their clouds has surpassed the human’s ability to manage them. And 70% said their team is forced to spend too much time doing manual tasks that could be automated.”

We have a leadership position in a massive, fast-growing market. Given the shift from early cloud environments to dynamic multi-clouds, we believe the market is moving toward us. Our leading unified platform, automation, and intelligence sets us apart in observability today and will be a sustainable advantage for us as companies continue to modernize and advance their cloud platforms.”

We could not agree more that the complexity is certainly increasing and managing the complexity is best left to automation, machine learning, and AI. On top of this, we believe Dynatrace is the best positioned player in the monitoring/observability segment.

Guidance raised for both FY21 and F3Q21

According to CFO Kevin Burns:

One of the great things about our business model is that it is resilient and predictable. With these attributes and our visibility into the pipeline, we feel confident about executing our plans. As a result, we are raising guidance for fiscal ’21.”

Our estimates are higher than consensus

Despite the company’s raised guidance, we believe the estimates are still conservatives. We expect the company to beat estimates again when it reports results in January 2021. The company’s implied expansion rate of 120% is conservative if viewed from the lens of the prior expansion rates that have been consistently north of 123%. On top of this, with Covid accelerating Digital Transformation projects, we believe the business is coming to Dynatrace at an accelerated rate. Given our confidence in the company’s product portfolio, routes to the market, execution capability of the management team, and visibility into its pipeline, our estimates are higher than consensus. The following chart illustrates our estimates versus consensus.

Stock performance since the report

Since Dynatrace reported results on October 28th, the stock underperformed the broader market. The stock is up about 2%, while Nasdaq is up about 8%, and S&P is up about 7%. We believe this underperformance is not warranted, given that the company reported solid numbers and beat estimates handily, and guided up. On top of this, Dynatrace is profitable and boasts an impressive operating margin north of 23%. 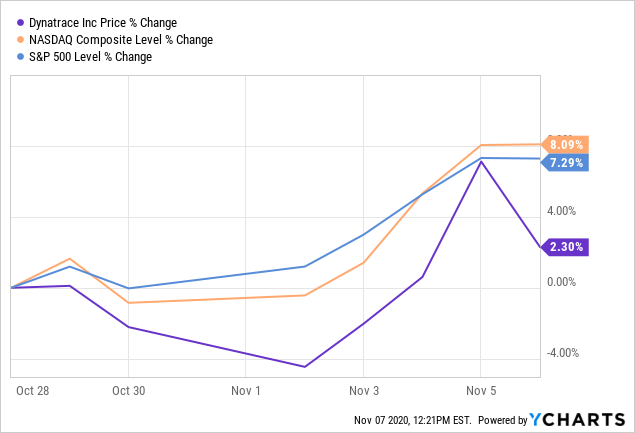 YTD, Dynatrace outperformed both the S&P and Nasdaq indices. Despite this, we believe there is significant room to improve, given that the stock is down 21% from its YTD high of about $47. We believe this underperformance is not warranted, especially when the company is the best APM product in the market today. The company is also expanding to newer modules such as Infrastructure, Digital User Experience, etc. 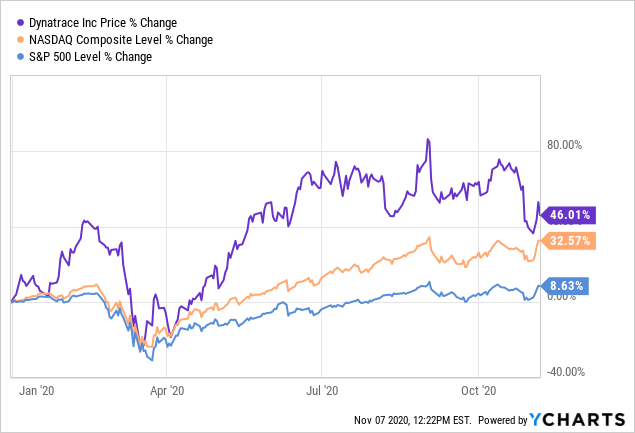 Risks of investing in Dynatrace

To keep the growth going, the company needs to hire direct sales representatives. These sales representatives need to be trained to sell Dynatrace’s products. The sales ramp up takes roughly a year. If the sales headcount cannot meet their quotas, it has essentially wasted both time and money. Unproductive salesforce is the biggest challenge for any enterprise software company. On top of this, Dynatrace also needs to aggressively build out its R&D team to keep the innovation going. If the company cannot bet correctly where the industry is expected to go, the company might not have the products to meet future demand. On top of this, Dynatrace is relatively expensive. In the event of a sell-off in the market due to external factors such as macro-economic weakness, Dynatrace’s stock could move down more than its peers. Any spending slowdown driven by macro or other shocks to the business environment could also impact revenues and earnings. Some of DT’s competitors, such as Cisco (CSCO), VMware (VMW), and Splunk (SPLK), have bigger balance sheets. These companies can use their balance sheets to sell their products at a discount, even at losses, forcing DT to match the prices. This price matching could impact revenue growth and earnings, triggering a sell-off in the stock. Besides, there may be other risks that are less likely to occur in our view or which we may not be able to anticipate currently.

What to do with the stock?

Since the company reported excellent results on October 28th, Dynatrace stock is up about 2%, and underperformed both the Nasdaq and S&P indices. The stock continues to trade at a discount to the SaaS subscription peer group. DT currently trades at around 11.0x EV/C2022 sales versus the SaaS/subscription peer group average of 13.4x, despite growing in line with the peer group average of 23%. 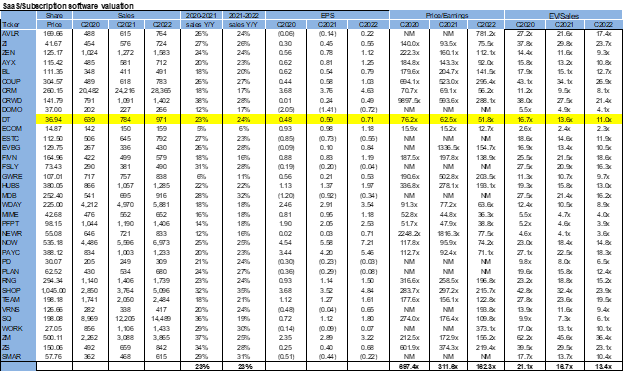 Similarly, the company is also trading at a discount to the Monitoring peer group, as the following chart illustrates. 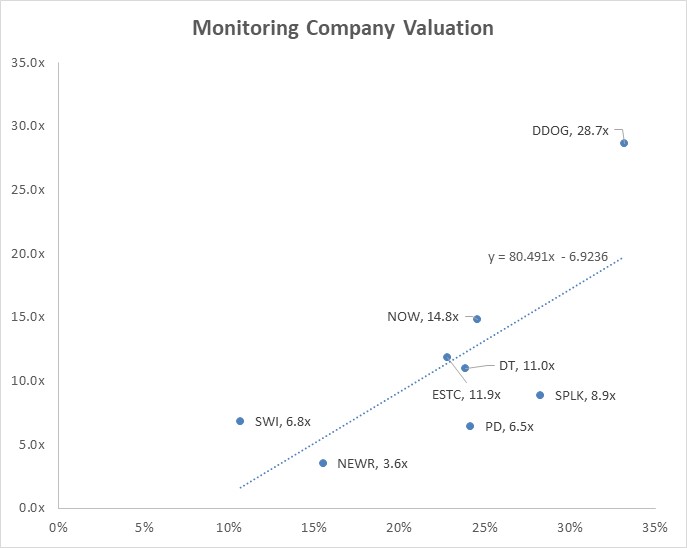 DT is currently at 11.0x EV/Sales versus Datadog (DDOG) trading at 28.7x, 2.6x the multiple of DT. We believe multiple expansion for Dynatrace is likely as the company continues to execute on new logo additions, maintain its Net Expansion Rate above 120% and beat and guide up for the rest of the year.

Given our confidence in technology and the potential to gain share against both legacy and the next generation incumbents, we believe the lukewarm response post solid results provide an excellent opportunity to own a quality name tied to digital transformation.

We believe Dynatrace is improving infrastructure monitoring, digital user experience, and other modules. We expect a customer to buy additional modules driving up the growth rate. Given that it is impossible to predict how high the valuation might go, and due to increasing volatility in the markets, a safer way to buy this stock is in small increments and over time.

Fundamental Euro Forecast: Neutral EUR/USD is back again to within touching distance of the 1.20 level that is seen by analysts as the line in the sand that has been drawn by the ECB. That […]

If we compare the market structure of the two kinds of markets to the function of market instruments traded there, we can ask, “Does form follow function?” There is a missing market type. The article […]