Editor’s note: This article was originally published on November 12, 2020, by Menzie Chinn here.

No acceleration in growth rates, but GDP level higher relative to October survey; few see a true “V”, or a true “W”.

Note that while the implied projected level of GDP is higher in the November survey, this is not because growth prospects have brightened going forward. Rather, it’s because Q3 growth outperformed the 28.5% growth (SAAR) in the mean October survey (results discussed in this post).

Figure 2 shows the mean GDP forecast, and the fastest forecasted growth (James Smith) (I want whatever pharmaceutical that guy takes!), and the slowest (Robert Dietz of the NAHB) over the next four quarters (2020Q3-2021Q2). 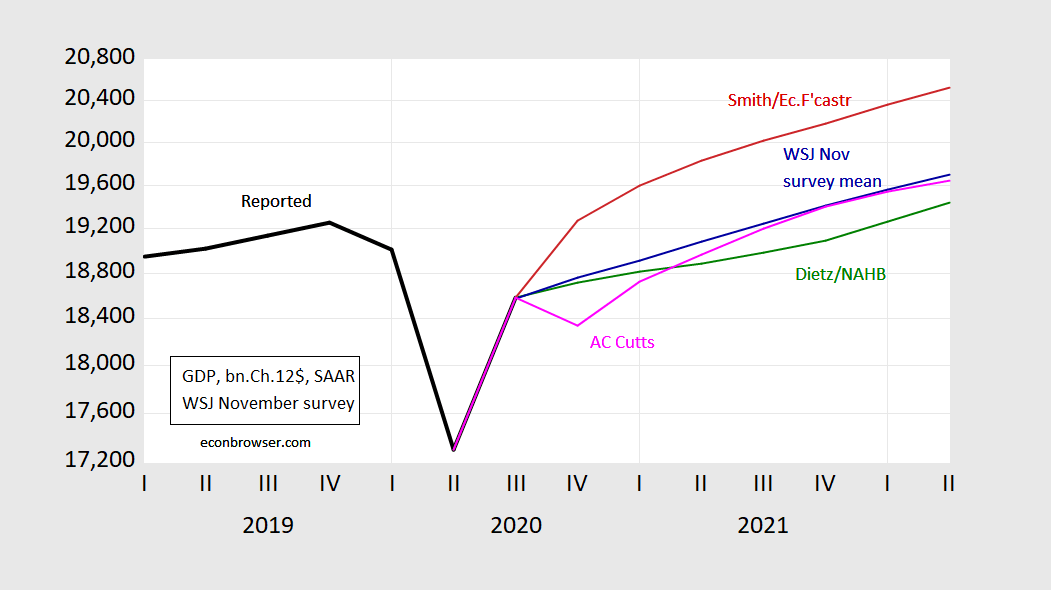 The survey was taken between November 6 and 10, so after election day, and presumably after it became somewhat clear who would win the presidency and who would control the senate.

Personally, I think that with the fast-deteriorating Covid-19 situation (cases, hospitalizations, deaths all rising), Trump administration’s complete abdication of a public health response, and administration obstruction of a transition to the new administration, I think most of these forecasters are underestimating the likelihood of zero growth in 2020Q4 and into 2021Q1.

In today’s newsletter, Goldman Sachs represents mainstream consensus view that a relatively small fiscal stimulus ($1 trn) is likely, but not arriving until the new congress is seated. With many programs ending at year’s-end, the heightened uncertainty (not to mention decrease in disposable income) is sure to constrain consumer spending. Torsten Slok (Apollo) notes:

The ongoing rise in the number of covid cases is likely to have a negative impact on mobility, shopping, and restaurant bookings, even in a situation where the US economy does not enter a second lockdown similar to what we are seeing in Europe. …The bottom line is that the near-term outlook for the global economy is negative because of the ongoing spike in the number of cases, but with the vaccine news we are likely to see growth accelerating going into 2021. In short, it looks like this will end up being a W-shaped recovery.

Countering the depressing effects of the pandemic is (for now) optimism regarding the development of an effective vaccine, although widespread distribution is not expected until something near mid-2021. That optimism should help sustain consumer spending by households and business fixed investment by firms that are not liquidity constrained.