The dollar is the king of currencies. As the world’s reserve currency, the US greenback is the foreign exchange instrument that central banks around the world hold as part of their reserves. At the same time, the dollar is the benchmark pricing mechanism for most commodities. Raw materials are global assets. As the US economy is the world’s leader and the dollar floats freely and is a stable foreign exchange vehicle with low levels of price variance, it has long been the tool for pricing the commodities required around the globe.

These days, the dollar is both strong and weak. While that sounds confusing, the dollar has been in a bullish trend against other world reserve currencies since February 2018 when the dollar index fell to 88.15. The steady rally over the past two years has taken the index back to just under the 100 level. The index has an over 83% exposure to the euro, pound, and Japanese yen. Against those currencies, the greenback has been a raging bull over the past two years.

Gold is the world’s oldest means of exchange and has been around long before dollars, euros, pounds, yen, and other global currency instruments. The dollar index reached a low of 88.15 in February 2018; gold traded to a high of $1361.40 during that month. At a high of 99.815 level on February 20, the index moved 13.2% higher over the past two years. Over the same period, gold at the $1650 per ounce level, is 21.2% higher. While the dollar has been strong when measured against other currencies, it is weaker compared to the price of the yellow metal.

The index surpasses the September high

It took five months, but on February 18, the March US dollar index futures contract finally rose above the early September high and level of technical resistance at 99.33.

As the weekly chart highlights, the dollar index consolidated above the 96 level since September and took its time before making a new high. The latest peak was another in a long series of higher peaks in the dollar index since it reached a bottom in February 2018 at 88.15.

Price momentum and relative strength have been rising since the beginning of 2020, and both metrics were in overbought territory at the end of last week. Open interest has risen since late January, moving from below 35,000 to almost 50,000 contracts. While the dollar index futures contract is a microcosm of the far more liquid over-the-counter market, the move in the number of positions reflects the rising bullish sentiment in the dollar. Rising open interest when the price of a futures contract appreciates tends to be a technical validation of a bullish trend. Weekly historical volatility at 4.16% as of February 21 reflects the slow and steady ascent of the dollar index.

The next target on the upside stands at the psychological 100 level. As of the end of last week, the index had reached a peak of 99.815, so the odds favor reaching the 100 level over the coming trading sessions.

In the past, when the value of the US dollar rose, it often weighed on the price of gold. Since gold is both a commodity and a means of exchange, the rise in the value of the world’s reserve currency weighed on the price of the yellow metal. In a sign that the dollar is the healthiest horse in the glue factory when it comes to the foreign exchange arena these days, gold has been moving higher alongside the US currency. The dollar may have reached its highest price since April 2017 last week, but gold did better.

The monthly chart of COMEX gold futures illustrates that the high of over $1650 on the April contract late last week took the yellow metal to its highest level since February 2013. The dollar may be in bullish mode, but gold remains a raging beast on the upside. While gold has moved higher in dollar terms since June 2019, it has already reached all-time highs against the euro, pound, and yen, which together account for 83.1% of the index. Gold still has a way to go to reach its 2011 high in dollar terms at $1920.70, but that is not the case for the other reserve currencies.

At the 1510 euro per ounce level, gold continues to make new records on the upside in euro terms.

Gold measured against the British pound was also at a new record level at the end of last week.

The same holds for the price of gold versus the Japanese yen. Gold has divorced from its historical trading pattern against the US dollar as its rise in all currency terms is a commentary on the falling value of fiat foreign exchange instruments. The price action in the dollar means that it remains the king of currencies, but gold is the monarch of money. Central banks hold the yellow metal as part of their foreign exchange reserves, and they continue to be net buyers of the yellow metal.

The dollar index appears set to move even higher, but that is not likely to slow the appreciation in gold. The ascent of the dollar in the current environment makes the greenback nothing more than the best of many ugly choices.

The 100 level in the dollar index is nothing more than a gateway to the next technical resistance area on the long-term chart.

The quarterly chart shows that the critical level on the upside stands at the January 2017 peak of 103.815 in the dollar index. Price momentum and relative strength metrics are trending higher, and the move since early 2018 are signs that a challenge of the resistance level is on the horizon. From a technical perspective, a break above the early 2017 peak leaves lots of upside potential for the index as the next critical level stands at the 2001 high at 121.29.

Rate differentials favor the greenback, but the U.S. Treasury could step in to slow the ascent

The Fed cut interest rates by 75 basis points in 2019 and ended its balance sheet normalization program, which was pushing rates higher further out along the yield curve. Even though the move to ease likely slowed the ascent of the dollar index, it was not enough to push the greenback lower. The rate differential between the dollar and euro fell from 2.65%-2.90% at the high to its current level of 2.00%-2.25%. However, with the Fed Funds rate at 1.50%-1.75% and the euro deposit rate at negative 50 basis points, the dollar continues to offer a yield while holding the euro involves a cost. The current level of interest rate differentials continues to support gains in the dollar index.

Meanwhile, the current administration in Washington DC is no fan of a higher dollar. As the US prepares to squeeze Europe on trade protocols, a rising dollar is not in the best interest of the US from a negotiating perspective. A stronger dollar against the euro makes US exports less competitive in the global markets. Therefore, we could see the US Treasury step in to stop the ascent of the dollar via intervention in the currency markets as the index moves above the 100 level and towards the early 2017 high. President Trump has often advocated for a weaker dollar as has his Treasury Secretary Steve Mnuchin, who has his fingers on the trigger of the foreign exchange market.

UUP and UDN move with the dollar index

We could be in for lots of volatility in the dollar index over the coming weeks and months. A move towards the level of technical resistance at 103.815 could trigger a round of intervention to push the dollar lower. At the same time, the upcoming 2020 Presidential election will be a referendum on the future of US policy on more than a few fronts. The bottom line is that we are coming into a period, with the dollar moving to the highs, where price variance in the currency arena could expand dramatically.

Moreover, the ascent of gold continues to cast a shadow over the value of all currencies, and the US dollar is no exception. Last week, Citigroup projected that gold would rise to over the $2000 per ounce level, which would be a new peak in US dollar terms. If gold is a commentary on the value of currencies that depend on the full faith and credit of the governments that issue the legal tender, we could be in for wild swings in the foreign exchange arena.

The Invesco DB US Dollar Index Bullish Fund and its bearish counterpart UDN are products that move higher and lower with the dollar index. The fund summary for UUP states:

The investment seeks to establish long positions in ICE U.S. Dollar Index futures contracts with a view to tracking the changes, whether positive or negative, in the level of the Deutsche Bank Long USD Currency Portfolio Index – Excess Return over time, plus the excess, if any, of the sum of the fund’s Treasury Income, Money Market Income and T-Bill ETF Income over the expenses of the fund. The fund invests in futures contracts in an attempt to track its index. The index is calculated to reflect the changes in market value over time, whether positive or negative, of long positions in DX Contracts.

The most recent rally in the dollar index took it from 96.02 on December 31 to 99.815 on February 20 on the March futures contract. The dollar index appreciated by 3.95% over the period. 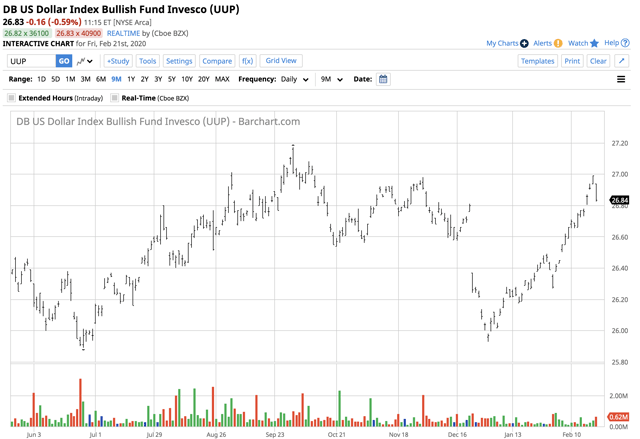 Over the same period, UUP rose from $25.93 to $26.99 per share or 4.09%. The better performance by the ETF reflects the interest rate benefits of holding the US dollar, based on the current differentials.

The dollar index looks set to challenge the 2017 high at 103.815. Meanwhile, it could be time to fasten your seatbelts for a wild ride in the foreign exchange markets based on signals from the world’s oldest currency, gold.