Throughout the Boeing (BA) 737 MAX crisis, Boeing has suffered a big blow to its reputation. The mistakes that were made are clear. And that itself wouldn’t directly destroy a company’s reputation, but with Boeing it’s different. The reason is that with Boeing it has looked as if the company allegedly willfully put out an unsafe product to optimize profits, or at least that’s the perception. In this report, I look at what probably is one of the most questionable dividends currently being paid.

Looking at the MAX and the MAX culture

I believe that Boeing made big mistakes during the development of the Boeing 737 MAX and in the way it handled the MAX crisis, mistakes that should never have been made and mistakes that wouldn’t have been made if Boeing would have not eroded the strong fundamentals of airplane design and certification. I don’t believe Boeing intentionally sold customers a death trap, but in an effort to be competitive, the company simply underestimated the need of additional pilot training for Boeing 737 MAX pilots. Possibly Boeing didn’t make decisions based on our assumptions, but looked for assumptions that would fit their decision.

You could say that Boeing should have designed an all-new aircraft and that the company went with the cheap MCAS solution. MCAS is indeed the cheap solution. But I think every Boeing critic should be aware that the Boeing 737 MAX aircraft didn’t crash because Boeing decided to go with a piece of software to maintain appreciable handling qualities, but because the MCAS design and robustness was really below par and Boeing did not inform regulators and airlines customers sufficiently while it used flawed assumptions in the design and certification process, which led to Boeing underestimating the consequences of system failure.

Everybody has their view on Boeing’s decision. The fact is that in engineering there often are tradeoffs between cost and design, but it should never compromise safety. With Boeing, that went horribly wrong as they burned through all safety nets typical with the design process, as the company made wrong assumptions, and within the company nobody seemed to take responsibility for the decisions that were made. Decisions were made, they were defended, but nobody questioned or owned them.

The way Boeing handled the crisis made the company look extremely bad and made the company look as if it has no moral code and no ethic compliance. One of the things that really doesn’t sit well with not only the traveling public, but lawmakers and even investors, is that despite facing a deep crisis Boeing continues paying a dividend. Obviously if a company allegedly tried to save a buck, which led to not one but two fatal accidents, not suspending the dividend is a thorn in the side.

Any day, I would be happy to state that I have an 8% yield on costs with my Boeing shares, but at the moment I/m unhappy that the company maintains its dividend. In December, I spoke to The New Republic explaining where Boeing’s money is currently coming from and I also explained, as I have done often in brief form over the past couple of months on Seeking Alpha, that fundamentally there’s no reason to be paying a dividend.

Boeing paying a dividend seems to be a matter of “just because you can, does not mean you should.” One reason is because the dividend payment bolsters Boeing’s image as a greedy company that lost its moral compass, and the second reason is the financial aspect, which is the main subject of this report.

In late 2019, Dennis Muilenburg departed from Boeing as he upset the regulator and put pressure on regulators, ultimately failing to bring the MAX back in service by year-end. His successor, David Calhoun, is known as a more charismatic person from whom it was expected that he will be much more humble, but he was very quick to support shareholders stating that the dividend would be maintained. So, seemingly touching the dividends is off limits, and while I don’t find it surprising that the dividend hasn’t been halted or reduced, it’s not really a decision that makes sense, except for one reason as I discuss later on.

You have to look no further than Boeing’s debt to see why paying a dividend is not healthy. In 2019, Boeing borrowed $25.4B. That’s a huge pile of cash. In previous years, Boeing could comfortably fund share repurchases and dividends with its cash provided by operating activities. That wasn’t the case in 2019 as the company saw cash from operating activities being negative $2.4B and free cash flow being negative $4.3B. For years Boeing has prided itself with returning its free cash flow to investors. By that logic, once the free cash flow goes negative for a longer period, the dividend should have come down as well. Instead, Boeing only froze the dividend.

The big question is “How did Boeing spend the money it borrowed?” That question is best answered with a diagram: 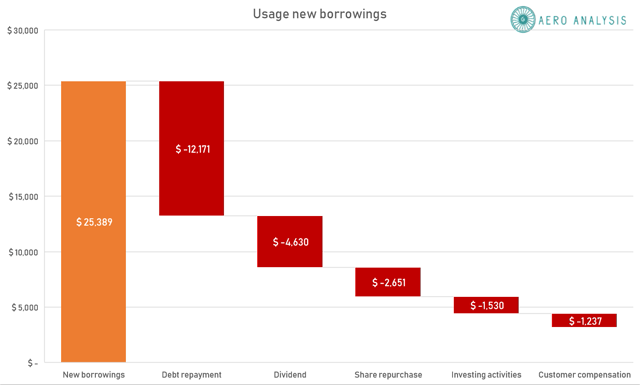 We often hear about Boeing having borrowed $12B (actual borrowings were $13B when the deal closed), but that’s merely Boeing’s new delayed draw term loan that it agreed on with a syndicate of banks. The actual amount borrowed is higher than $25B. Figure 1 shows one thing clearly: Nearly half, 48%, of the borrowed money is used to make debt repayments. Over $7B or 28% of the borrowed money has gone to shareholders in the form of dividend payments (18%) and share repurchases (10%), which were halted after the grounding of the Boeing 737 MAX. Smaller cash components were investing activities at $1.5B or 6% and customer compensations of $1.2B or 5%, the remainder of the borrowings has been used to bolster the cash pile and cover other cash items.

The notion that Boeing solely borrowed money to pay dividends is not accurate, since a big part of the money has gone to debt repayments. Nevertheless, out of all cash components listed, returning value to shareholders is the most useless one as it doesn’t bolster the company’s financials. The share repurchases were halted rather quickly, but Boeing has continued to pay $4.6B in dividends, and although I’m one of the beneficiaries of that decision it’s not one that I think is extremely prudent.

I wouldn’t say paying a dividend defies all logic as not paying dividends will further pressure share prices, but I don’t see how paying a dividend really fits a rational approach to the financial position of the company.

The big question one could have is why Boeing is paying a dividend when it has to borrow the money. I think the answer partially lies in the fact that the money is cheap. We are in a low interest rate environment, so there’s nothing that really punishes borrowing money. You borrow money, you pay a tiny interest penalty, a cost a company such as Boeing is willing to make. If interest rates would be higher, Boeing would be less inclined to pay dividends with borrowed money. During the past five years, we could find only one year (2016) in which new borrowings did not exceed debt repayments. So, Boeing has an urge for accumulating debt and the low interest rate environment likely is one of the reasons why Boeing has that urge for debt.

As mentioned, Boeing’s decision to continue paying a dividend likely is because not paying a dividend would make share prices tumble even further. For Boeing executives who have part of their compensations in stock packages, that wouldn’t be good. If that was the sole reason, it would mean senior management doesn’t have its interests aligned with that of the company. The bigger issue here, however, is Boeing’s underfunded pension plan.

A couple of years ago, Boeing made what I marked as a risky move by funding its pension plan with $3.5B in shares. To taper the funding gap Boeing bet on higher share prices as the company sells those shares in later years. Share prices are still higher compared to the moment Boeing funded the pension plan with a stock package, so you could say Boeing’s approach has been successful, but the risk is clear. When Boeing has to preserve cash and possibly cut the dividend, share prices will tank, in which case the value of the pension plan shares declines. By funding the plan with shares, management found another reason, next to their own stock compensation packages, to boost Boeing’s profits and share prices, but it’s a risk. Because Boeing funded part of the gap that way, the company will be less inclined to cut dividends, even when paying a dividend does not make sense.

In my view paying a dividend hasn’t made financial sense for Boeing’s day-to-day operations. Boeing used part of the money it borrowed to repurchase shares and pay dividends, which to me seems like a consequence of the low interest rate environment in which there are extremely little monetary forces that would move a company to reduce its debt. In fact, in Boeing’s case, the low rate environment has been a driver of the way the company practices its business and participates in shareholder value appreciation. Now, if rates are low, I can’t say I do not understand that a company would borrow money, but the thought of borrowing money to make debt repayment and borrowing money to return value to shareholders just doesn’t sound healthy.

But even if Boeing would want to cut the dividend, the fact that it would put significant downward pressure on share prices would prevent them from doing so as it could require Boeing to make additional contributions to its underfunded pension plan.

*Join The Aerospace Forum today and get a 15% discount*