One of the best performing stocks so far this year is electric vehicle maker Tesla (TSLA). Investors have sent the stock soaring to new heights thanks to deliveries holding up fairly well and GAAP profits potentially leading to S&P 500 inclusion. Interestingly enough, there is one thing associated with Tesla not rising currently, which could help to fuel the rally even further if the recent trend continues.

In early July, Tesla came out with a decent Q2 production and delivery report. However, street estimates were so ridiculously low that everyone made it seem like it was a massive blowout. The low bar continued into the earnings report, where Tesla revenues came in well above the street average, although anyone that followed my coverage knew that a sizable beat was likely. Tesla has only missed revenue estimates three times since Q3 2016, and the only major miss was in Q1 2019 when Tesla took a major one time hit to revenues from an accounting reversal.

For Tesla to get to its 500,000 unit delivery guidance for the year, it needs a really strong back half of the year. As I discussed in a previous article, a moderate ramp would mean roughly 142,000 vehicles delivered during the current quarter and then 178,000 in Q4. These would both be quarterly records for the company, and likely would lead to the two best revenue prints in Tesla history. That being said, take a look at the following graphic, which highlights a history of Q3 2020 analyst revenue expectations.

I’m not going to make a big deal of the 2016 and 2017 numbers, because that was a number of years off and could have been impacted by a very low number of estimates. In late 2018, however, the analyst average was over $9 billion for Q3 2020 revenues. Six months ago, the end of February 2020, the Q3 average stood at $8.36 billion, during the start of the coronavirus pandemic. Two quarterly revenue beats later, and the Q3 average is down about $200 million since. Yes, there was a sharp drop and then a rebound, but we’ve still seen the average come down by $100 million in the last month.

Based on current street estimates and a few personal projections for the quarter, the current revenue average implies a little over 122,000 deliveries for Q3. That would make it extremely hard to hit the company’s yearly guidance, and it also would be quite disappointing when Tesla has the ability to produce well over 150,000 vehicles per quarter at this point. Just like the past quarter, it seems that the street is setting a pretty low bar.

However, there’s another major factor here that I haven’t really heard any analysts discuss lately, and that’s the weaker US Dollar. So far during Q3, the greenback has taken a big hit versus many key currencies. In the chart below, you can see the average dollar close so far during Q3 as compared to the average close for all of Q2 against three key currencies. 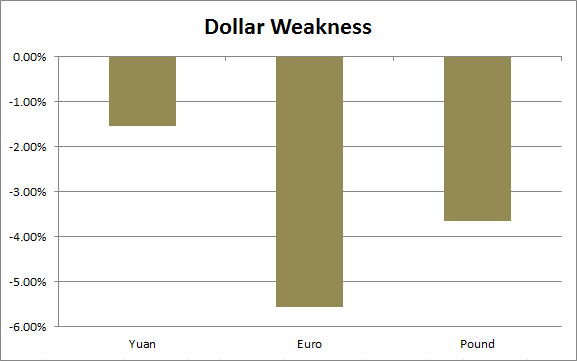 While Tesla shares are currently soaring by the week, street analysts don’t seem to be raising their numbers in stride. In fact, the average revenue estimate has declined over the last month, and when combined with a much weaker US Dollar, that implies that the average delivery estimate is heading a bit lower. Should this trend continue through September, it would seemingly set up another low bar for the Q3 delivery print, which could fuel the rally even further when the reported number “shockingly surprises” the street.

Additional disclosure: Investors are always reminded that before making any investment, you should do your own proper due diligence on any name directly or indirectly mentioned in this article. Investors should also consider seeking advice from a broker or financial adviser before making any investment decisions. Any material in this article should be considered general information, and not relied on as a formal investment recommendation.