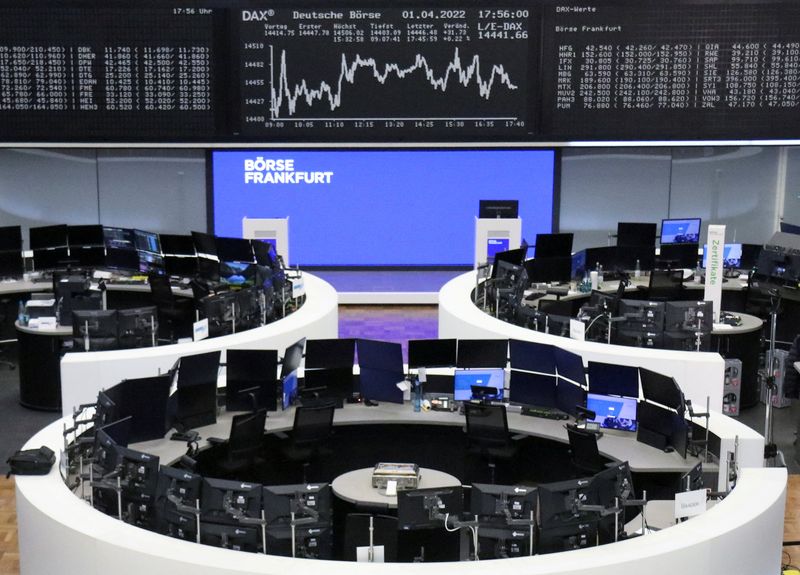 By Susan Mathew and Anisha Sircar

(Reuters) – European shares gained on Monday with tech stocks rallying more than 2%, while investors kept an eye out for more Western sanctions after Ukraine accused Russia of war crimes.

The sector also got a boost as Delivery Hero surged 10.7% after it launched a debt financing syndication equal to 1.4 billion euros ($1.55 billion) with proceeds to be used to bolster its liquidity position.

Meanwhile, opinion polls ahead of France’s first round of voting on Sunday showed the country faces a repeat of the 2017 election showdown between Emmanuel Macron and Marine Le Pen, with Macron still favoured but in a tighter race.

“Investors have been looking through this election, given the high likelihood that Macron still is in office … If he wins, it’s unlikely to lead to a material shift in allocations,” said Dean Turner, economist at UBS.

“Further, unlike the 2017 election, where Macron’s opponent was campaigning on a platform of France leaving the euro, no candidate is putting forward such policies. So even if there was a surprise result, the market implications wouldn’t be as material as in 2017,” Turner added.

Meanwhile, travel stocks including Wizz Air and Deutsche Lufthansa (DE:) slipped 0.1% each after EasyJet cancelled hundreds of flights due to staff sickness amid a fresh surge of COVID-19. EasyJet fell 0.2%.

However, travel disruptions are being viewed as a temporary issue on a relatively small number of flights, said Craig Erlam, senior market analyst at OANDA, adding that longer-term views of European travel firms remain intact.

This could mean more pain for STOXX 600, which is down about 7% from its all-time high in January.

“We have cut our overweight to European equities as we see the energy shock hitting that region hardest,” wrote BlackRock (NYSE:), the world’s largest asset manager, in a weekly note.

Reinforcing fears, investor morale in the euro zone fell to its lowest in nearly two years in April, pointing to the beginning of a recession in the second quarter of 2022.

Roche climbed 3.1% after the U.S. Food and Drug Administration granted priority review to its drug to treat COVID-19 in hospitalised adults.

Telecom Italia (MI:) fell 1.9% as the odds for a KKR takeover receded with the U.S. fund set to make it clear it will not formalise any bid without due diligence.