In late 2018, Taseko Mines (TGB) announced its intention to acquire Yellowhead Mining for $11.43 million (in shares). In February 2019, after the transaction was completed, Taseko won control over Yellowhead’s Harper Creek (later renamed to Yellowhead) project. As I wrote back then, the project was acquired almost for free, given that its resources contained copper, gold, and silver with a market value of $24 billion. The problem was that the initial CAPEX was estimated at $923 million, moreover, the after-tax IRR was only 13.4%, according to the 2014 feasibility study. Less than a year has passed since closing the transaction and Taseko was able to announce some interesting progress of the project.

On January 16, Taseko announced new reserves estimate as well as a new technical report for Yellowhead. In comparison to the 2014 feasibility study, Taseko increased the cut-off grade from 0.15% to 0.17% copper. As can be seen in the table below, the copper equivalent grade of the reserves improved slightly, from 0.27% to 0.29%. In the case of measured and indicated resources, no major changes occurred. However, the copper equivalent grade of inferred resources declined from 0.27% to 0.23%. 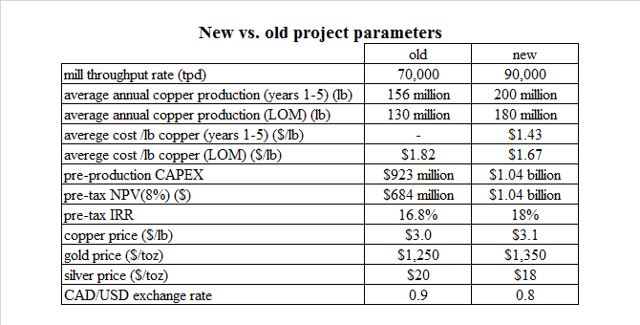 The changes projected by Taseko resulted in a 12.7% growth in pre-production CAPEX. Taseko expects that the mine construction should cost around C$1.3 billion, or $1.04 billion, using the CAD:USD exchange rate of 0.8. The exchange rate is more favorable compared to the old study that used an exchange rate of 0.9, however, it is more in line with the current exchange rate of 0.77. Also the metal price assumptions experienced some changes. The copper price was increased from $3/lb to $3.1/lb and gold price from $1,250/toz to $1,350/toz, while the silver price was decreased from $20/toz to $18/toz. As a result, the pre-tax NPV(8%) increased almost by 50%, from $684 million to $1.04 billion. The pre-tax IRR increased from 16.8% to 18%. Although it is a move in the right direction, the IRR remains unimpressive. However, the project has high leverage to the metals prices. According to Taseko, a 10% increase in the metals prices leads to a pre-tax NPV(8%) of $1.6 billion. Given the expected significant copper market deficits, a copper price of around $3.4/lb (and possibly much higher) cannot be excluded. Especially given that Yellowhead should get into production in the middle of this decade at earliest.

Yellowhead presents an interesting longer-term development option. After Florence is in full production, Taseko should be well-positioned to start the Yellowhead mine development, probably together with a joint-venture partner. According to Russell Hallbauer, Taseko’s CEO:

While our primary and near-term focus will remain on the advancement of our Florence Copper Project through to production, we will continue to progress Yellowhead expeditiously as the timing will fit in ideally after Florence Copper achieves commercial production. With the new Technical Report now complete, our efforts will focus on environmental assessment work, ongoing engagement with local communities, additional engineering as well as evaluating the merits of selling an interest in the project to a joint venture partner. Our plan is to add 85 million pounds of annual copper production from Florence Copper by 2022 and then another 200 million pounds from Yellowhead by 2025. A 280% production growth profile over six years to nearly 390 million pounds annually cannot be matched by any company in our sector and could be well timed with a growing copper supply deficit.

Although some positive developments were achieved at Yellowhead, they won’t have a meaningful impact on Taseko’s share price in the near future. Florence remains Taseko’s main priority. Yellowhead should follow, with the first production expected around 2025. It means that Taseko has several years to obtain permits, to further optimize the whole project and to find a joint-venture partner. Also the expected higher copper prices should help notably, as at the current copper prices, the IRR of the project isn’t too attractive.

Disclosure: I am/we are long TGB. I wrote this article myself, and it expresses my own opinions. I am not receiving compensation for it (other than from Seeking Alpha). I have no business relationship with any company whose stock is mentioned in this article.

© Reuters. FILE PHOTO: The logo of Amazon is seen at the company logistics center in Lauwin-Planque, northern France, November 15, 2022. REUTERS/Pascal Rossignol (Reuters) – Amazon.com Inc (NASDAQ:) was down for thousands of users […]