Among palladium (PALL) producers, my favorite company is Sylvania Platinum (OTC:SAPLF). The reason is that it has very low costs and it produces platinum group metals (PGMs) from chrome tailings, which is much less technically challenging compared to deep underground mines. However, in January, I wrote an SA article in which I said it was time to sell as high palladium and rhodium prices were unlikely to last for much more.

Then the situation changed drastically on the supply side as COVID-19 pushed South Africa to order the closure of mining operations at the end of March with the aim to contain the spread of the virus. I reversed my take on Sylvania and posted another SA article in which I concluded that the company was well-positioned to weather the storm thanks to its strong cash position and should benefit from rising platinum and palladium prices as supply was destroyed.

South Africa, which accounts for close to 40% of global palladium mine supply, allowed mining to resume on 1 May and some data suggests that the palladium market is close to balance in 2020 and 2021. However, I have a different view and think deficits are likely to last and keep prices high.

Sylvania’s business and its H1 2020 results

Sylvania owns a total of six operating chrome beneficiation and PGM processing plants, which process chrome tailings at host-mine sites on the Eastern and Western Limbs of the Bushveld Complex in South Africa. The latter is the largest source of PGMs in the world, although most mines are now deep underground and technical challenges are plenty.

The company currently has an annual production capacity of 74,000 to 76,000 ounces of 4E PGM, with palladium accounting for around a quarter of that. 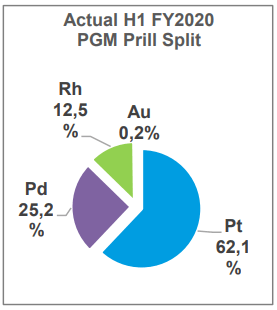 However, this is still a high proportion of palladium compared to traditional miners as the metal is usually mined as a by-product of other metals – platinum in South Africa and nickel in Russia.

What I like most about Sylvania is that it has a strong balance sheet with no debt and its cash costs are the most competitive in the whole PGM sector at around $600 per ounce.

Regarding the financial results for Q2 2020, it was a weak quarter with production of 4E PGMs dropping by 55% to 9,055 ounces. However, this is understandable as the business was closed through April and began running at full capacity in June. Still, Sylvania managed to squeeze a net profit of $2.2 million, which I consider an achievement in this environment. 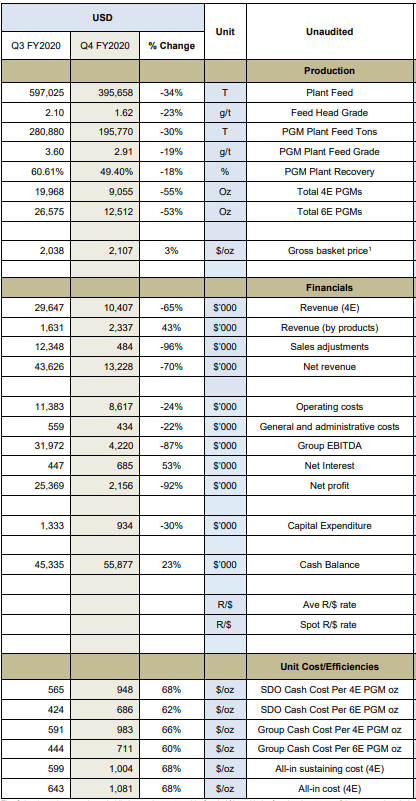 On a negative note, retrenchments at two host mines (Mooinooi and Lannex) due to the depressed chrome market led to Sylvania reviewing its plant feed strategy, which will result in a decrease of 10-15% in production during the next 12 to 18 months.

The impact of COVID-19 on the palladium market

Platinum and palladium are primarily used in catalytic converters, which are a part of auto exhaust systems that reduce toxic gas emissions. The automotive industry accounts for more than 80% of palladium demand, which is bad as there are few sectors which have been more heavily impacted by COVID-19. According to data from Norilsk (OTCPK:NILSY), demand destruction from the auto sector is estimated to stand at around 1.6 million ounces in 2020.

On the supply side, South Africa accounts for 75% of the global platinum and 38% of the global palladium mine production and Norilsk estimates the lock-down in the country will be the main contributor to a 14% decrease in global supply in 2020. 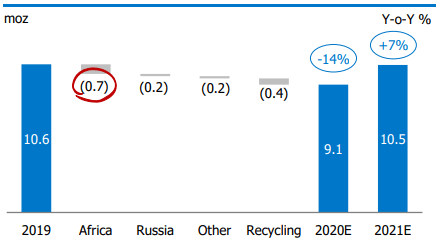 With demand dropping faster than supply, data suggests that the palladium market will be close to balance in 2020 and 2021 for the first time in a long time. 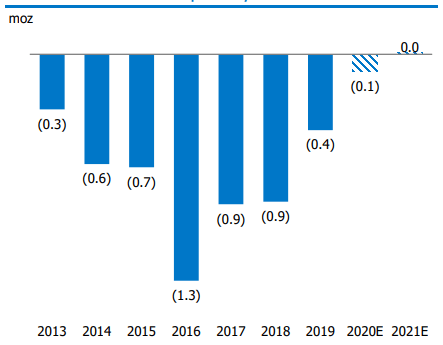 However, I think the estimates from the Russian mining giant are too optimistic. The reason behind my thinking is that PGM production in South Africa failed to recover in June, although mines in the country were allowed to reopen. 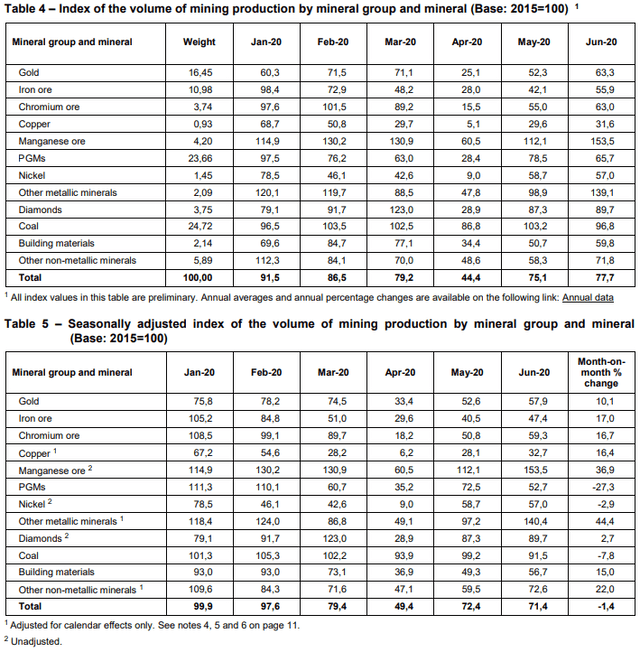 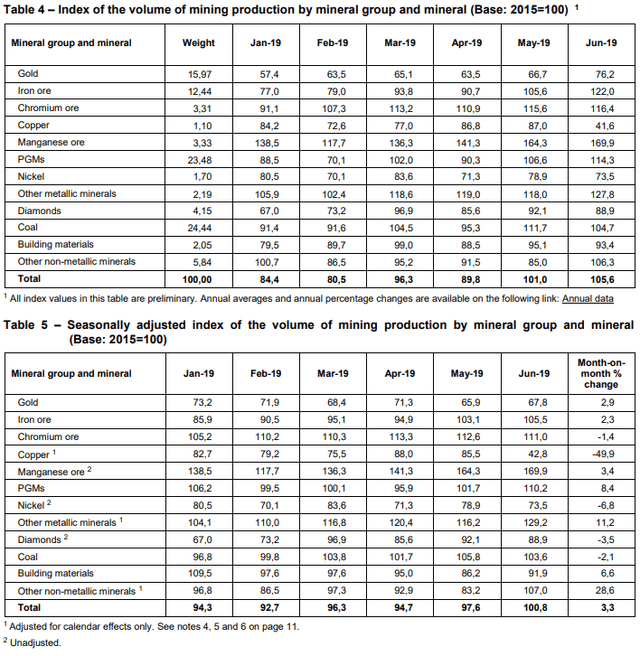 As you can see from the June 2020 data from South Africa’s national statistical service, output from open pit mining operations such as manganese has recovered but PGM production is actually down month-on-month. In fact, PGM was the only mineral group, which registered a double-digit decline on the month. Also, production was very weak in March too, which leads me to think that the impact on palladium supply from disruptions in South Africa is going to be higher than 0.7 million ounces in 2020. Statistics South Africa doesn’t provide separate data for PGMs, but I think it’s relatively safe to assume that palladium output is down proportionally to platinum.

If palladium output in South Africa doesn’t recover by the end of 2020, I think production of palladium for the country could be down by at least 0.9 million ounces during the year, thus keeping structural deficits in place. Deep underground mines are technically challenging to operate as well as to re-open and I think it’s possible that palladium production from South Africa remains subdued in 2021, especially if some mines stay closed permanently. With this, deficits in the palladium market aren’t going anywhere anytime soon and this should support high prices for the metal.

Sylvania has a high proportion of palladium and rhodium output compared to other South African PGM producers, which allows it to currently have a gross basket price of around $2,100 per ounce. At these prices, the company can generate EBITDA and profits of around $30 million and $25 million per quarter, respectively.

The main listing of Sylvania is on the LSE and the company currently has an enterprise value of $162 million, which makes it look like a compelling investment opportunity with a forward EV/EBITDA of around 1.4 times.

Palladium prices will eventually decline, but I don’t see it as being likely over the next year as the lack of recovery in South African production is keeping the market into deficit.

Additional disclosure: I am not a financial adviser. All articles are my opinion – they are not suggestions to buy or sell any securities. Perform your own due diligence and consult a financial professional before trading.