The Swedish krona had been one of the strongest performing currencies this year. The main reason for this was that the Riksbank (Sweden’s central bank) had committed to not lowering interest rates further – even during the onset of COVID-19 when many central banks had been lowering rates in order to mitigate the negative economic effects of the pandemic.

With that being said, fears of a second wave have resulted in a flight to safety towards the U.S. dollar – as coronavirus cases in Europe have started to spike once again.

More notably, we see that even though the euro has been declining against the dollar – the Swedish krona has in fact seen a proportionally stronger decline against the euro:

This is particularly surprising as Sweden – at the time of writing – has not seen any particular growth in daily COVID-19 cases as compared to last July.

However, the Riksbank has recently gone on record as stating that interest rates are likely to remain at zero until at least 2023. As evidenced by the sharp depreciation that we have seen in the krona, markets clearly take this information too well.

While Sweden’s central bank has so far resisted the temptation to lower rates even further into negative territory, one of the appeals of the currency to begin with was that it allowed international investors exposure to a European currency without having to deal with potentially further depreciation in the euro as a result of continued zero rates. Anticipation that the Riksbank would start to raise rates when appropriate had led to increased investor interest in the currency.

However, with such a possibility now off the table – the krona has started to see a significant decline. As we head into Q4, I anticipate that the currency is set for a further decline.

Risk-on sentiment had increased somewhat in the summer months – as cases of COVID-19 in Europe started to flatline. However, the upcoming quarter presents significant uncertainty, given 1) the future trajectory of COVID-19, 2) the outcome of the Brexit negotiations, and 3) the upcoming U.S. Presidential elections.

I anticipate that this will lead to the U.S. dollar rebounding as a safe haven currency. As a result, there is little case to be made for further, broad-based demand in the Swedish krona and I expect the currency to decline accordingly.

According to the most recent monetary policy report by the Riksbank, we can see that bond yields in Sweden remain lower than that of the United Kingdom and the United States: 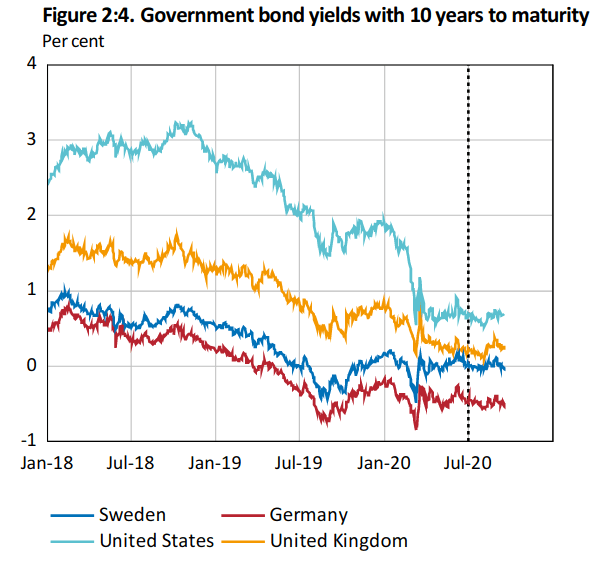 This indicates that Swedish rates are likely to remain low for quite some time to come – and it would not be at all surprising if the Federal Reserve was in a position to raise rates before the Riksbank – once an economic recovery gets underway.

On the other hand, we do see long-term inflation expectations for Sweden and the United States remaining significantly higher than the euro area: 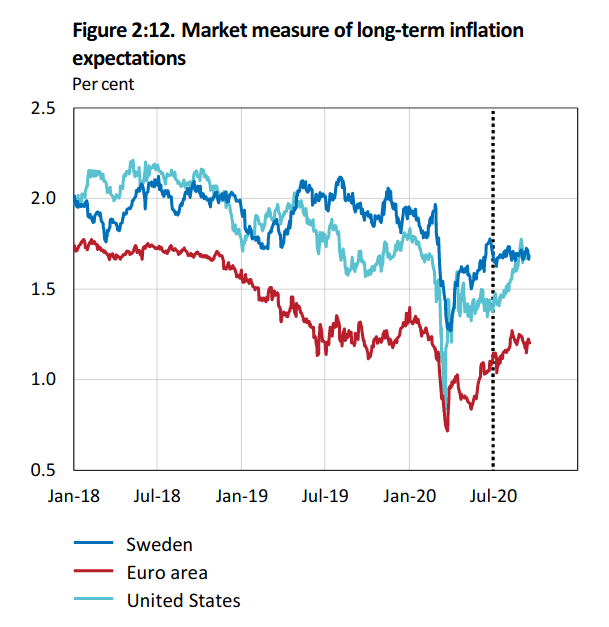 From this standpoint, I could see a situation where the Riksbank could rebound significantly against the euro in the event of risk-on sentiment increasing once again. However, I do not see this happening for the remainder of this year.

To conclude, I expect further downside in the krona against the euro and dollar going forward. The currency could be set for a revival in 2021 when risk-off sentiment reduces – but this is not likely to happen before this time.