At one time I held shares of Suncor (SU) because – back in the day before fracking – it appeared the US would be very dependent on the Canada oil sands. And to some extent, the US still needs Canadian heavy for refineries with high coking capacity and like to produce diesel. That said, I feel very lucky to have gotten out of Suncor with a decent profit considering the shares today are significantly below where I first invested shortly after the 2008/2009 financial crisis.

As can be seen from the recent Q2 EPS presentation, Suncor’s fortunes were declining well before the global pandemic and throughout 2019 even as WTI averaged over $50/bbl: 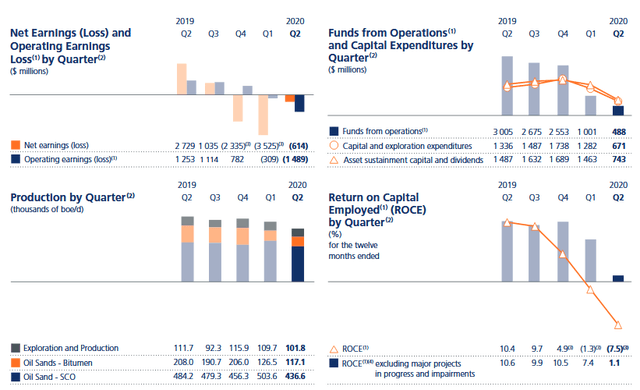 As can be seen net earnings have, funds from operations (“FFO”), production, and ROCE have generally been declining for over a year now. The stock has declined from a high of $41+ in mid-2018 to the current $17 level.

As a result, Canadian oil sands producers swamped its exit pipeline capacity and led to a glut of Western Canadian Select (“WCS”). That caused prices to drop off the chart. At one point in 2018, WCS traded at a $50/bbl discount to WTI (see Cenovus: Storm Clouds Parting As Alberta Government Comes To The Rescue). That led the CEO of Cenovus to run to the government for help in the form of mandated production cuts. Permission granted. Suncor was against the mandates, likely hoping to see its fellow oil sands producers hit the bottom and buy them out for a song (something the Canadian oil sands desperately needs: consolidation). Nevertheless, it had to abide which is one reason Suncor’s combined bitumen and SCO production has dropped from ~692,000 boe/d in Q1/2019 to 630,000 boe/d in Q1/2020. Then the pandemic hit and that dropped another 15% to average ~534,000 boe/d.

As a result of the lower production, and the lack of efficiency of its oil sands facilities running at below ideal capacity utilization rates, FFO and earnings have dropped significantly, as has ROCE (return on capital deployed).

Further, in an age of energy abundance – which in Suncor’s case means lots of oil sands producers like Cenovus that are capable of producing very high amounts of product – even if Enbridge’s (ENB) mainline capacity expansions finally get their desperately needed US permits and get built, that capacity will likely get filled fairly quickly and the WCS discount to WTI will likely attain its traditional fairly wide discount.

As if these headwinds weren’t enough, the pandemic hit. Suncor responded aggressively and on its Q1 conference call announced a number of measures taken in response to the unprecedented market environment:

Many of those steps (if not all) are likely due because one of Suncor’s advantages over many of it oil sands competitors – has been it’s downstream refining assets that can recoup lost margins at the WCS level. Refining in North America has been hit with a one-two punch of lower jet-fuel and gasoline demand. As I recently reported (see Phillips 66 And The Future Of Refining), an uptick in jet-fuel and gasoline demand in the US is directly tethered to its ability to get Covid-19 under control. On that front, things don’t look promising – and appears unlikely to change any time soon. While the rapid increase in new cases has flattened out, it has flattened out at an extremely high level (over 50,000+ cases per day) and the deaths per day are back up over 1,000.

Under such conditions, it’s hard to imagine that the EU, Canada, China, the Bahamas and many other countries will lift their current ban on American travelers. As a result, it’s hard to see jet-fuel demand come roaring back. Meantime, school related gasoline demand – which the Phillips 66 (PSX) CEO estimated to be ~5% annually – also appears to be hard hit. The bottom line here: refining capacity utilization in the US is in the low-80% range and that’s not good for refining margins. Sure, SU has some refining capacity in Canada, but it is not immune to the refining marco-environment in the U.S.

On the environmental front, Suncor continues to be exposed to headline risks. Last month, the company was slapped with seven environmental charges related to Strathcona County refinery in Alberta. That’s notable in that it’s usually Suncor’s oil sands operations that come under fire for its emissions.

Like many energy companies, the pandemic and resulting economic impact has hit Suncor hard. Lower demand means its oil sands operations will toil away at less than efficient levels. Perhaps more important to the company’s financials, the reduction in jet-fuel and gasoline means its refining assets – which it relies upon to recoup margins when the price of WCS drops preciptiously – will be running at low capacity utilization rates for the short- and perhaps mid-term. The company was correct to cut the dividend 55%. Otherwise, it might have had to take on significant debt to cover it.

With production hemmed by mandates and a lack of pipeline capacity, and refining margins hemmed in from significant demand destruction, it’s hard to find a positive catalyst for Suncor in the short-term, maybe even the mid-term. While I suppose one could make an argument that, at some point, demand for jet-fuel and gasoline in the U.S. will come back to pre-covid levels, the question then becomes when? And, what will be the opportunity costs of investing in a company like Suncor rather than just a plain vanilla S&P500 index fund or an ETF that focuses on technology or clean energy? No doubt those sectors are more highly valued than is the energy patch – but it’s been that way for over a decade now and I don’t see any reason why it won’t be the same for the next decade. I’d avoid the shares.

Disclosure: I am/we are long ENB, PSX. I wrote this article myself, and it expresses my own opinions. I am not receiving compensation for it (other than from Seeking Alpha). I have no business relationship with any company whose stock is mentioned in this article.

© Reuters. FILE PHOTO: Windmills tower over a field in near the city of Waremme By Nina Chestney LONDON (Reuters) – The world must combine COVID-19 recovery packages with massive investments in renewable energy and […]