The Stone Harbor Emerging Markets Income Fund (NYSE:EDF) is a closed-end fund that invests in fixed income securities of emerging markets including sovereign debt, corporate bonds, and related derivatives. The fund currently has $147 million in total assets and seeks to maximize total returns with a high level of income. Indeed, the fund’s distribution yield currently at 15.5% has been a compelling attraction to the strategy. On the other hand, we note that NAV performance has been mixed relative to benchmarks while the fund just announced a cut to its monthly dividend rate as a bearish trend. Also, we think the EDF’s exceptionally high premium to NAV near 50% is unjustified, which could narrow and converge lower going forward. This article takes a look at some trends that define our bearish opinion of the fund.

EDF invests primarily in sovereign bonds which represent 90% of the asset allocation. These securities are issued by foreign governments and reflect a country’s obligation to repay debt either in local currency or issued in foreign currencies like the U.S. dollar or euro. Based on the latest disclosed holdings, EDF includes exposure to a wide range of emerging markets with a 38% concentration in Latin America while Mexico at 10% weighting represents the largest country exposure. Russia at 8.3% of the fund and Argentina at 7.3% are the next top countries by fund’s weighting. 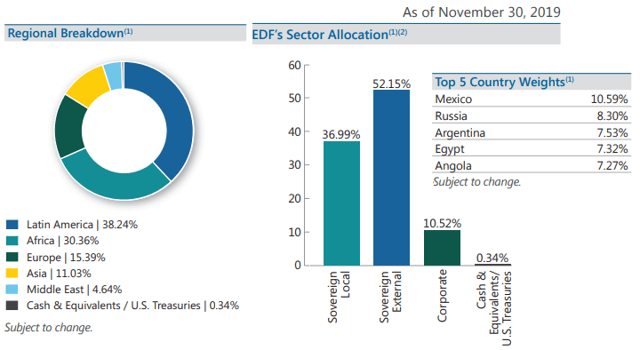 Generally, this asset class should benefit from positive economic fundamentals of the underlying countries including indicators like GDP growth, external accounts and trade statistics, fiscal balances, and inflationary trends. A weakening dollar and strength in emerging market currencies can also be a bullish driver of returns in the context of credit spreads. We have an overall positive view of emerging markets and think this is an exciting segment but have some concerns related to EDF particularly as it relates to its performance history and currently wide premium to NAV.

Curiously, the market price performance of EDF has been a separate story and was up by a significant 45% for the full year 2019 (38% through November 30th per the table above). Over the past four years, the share price on EDF has climbed 129.4% compared to a 48.6% total return on NAV. This reflects a large premium to NAV that has widened in recent years to reach a current level of 50%.

Compared to a discount to NAV of 16% in early 2016, the incredible surge higher in the premium has been the main driver of the market price return. In our view, the current premium is both unsustainable and unjustified. While it’s difficult to quantify a reason for any particular premium or discount to NAV, EDF’s level is dubious, and we believe should be lower given the performance history compared to other EM CEFs.

Compared to some alternative emerging markets “EM” closed-end-funds, EDF is simply an outlier in terms of its premium to NAV. EDF’s sister fund, the Stone Harbor EM Total Income Fund (EDI) which features a different strategy with the flexibility to invest in EM equities has a more moderate 16% premium to NAV. Other options including the Morgan Stanley Emerging Markets Debt Fund (MSD), First Trust/Aberdeen EM Opportunities Fund (FEO), Western Asset EM Debt (EMD), and Templeton Emerging Markets Income (TEI) all trade at a discount to NAV.

On the other hand, taking a look at the returns data on NAV, EDF with a cumulative total return to NAV at 9.2% over the past three years is below the segment average. Keep in mind that each fund may feature different strategies and exposures, but are generally invested across EM sovereigns and corporate bonds to various degrees. Our point here is that the premium to NAV for EDF is simply unnecessary and represents a higher risk for shareholders should the spread converge lower. Investors can get similar exposure to EM debt in comparable funds that have generated a stronger return on NAV performances.

One explanation for EDF’s wide premium to NAV is that the market has been attracted to its distribution yield level which is currently above 15% and higher than comparable EM CEF alternatives in the market. If that’s the case, investors should be disappointed that the fund just cut its dividend for the first time in its 9-year history. EDF lowered its monthly distribution by 5.5% to a new rate of $0.17 per share. For reference, over the past year, the portion of the monthly dividend classified as a return of capital payout has averaged about 65%. Management justified the change including citing the fund’s NAV level ass one factor. From the press release:

Fund’s monthly distribution was reduced by $0.01 per share. The change in the Fund’s distribution takes into account many factors, including but not limited to, the Fund’s current and expected earnings, the Fund’s net asset value, the overall market environment, changes in foreign exchange rates, and Stone Harbor’s current economic and market outlook.

The wide premium to NAV may have been supported by a view that the fund was committed to maintaining the dividend level. While it’s common for CEFs to adjust the distribution rate lower as the NAV declined, EDF may have been bid higher on a notion that it had a flawless record in this regard.

Compared to a dividend yield of 16.5% on a trailing twelve-month basis, the new dividend rate represents a forward yield of 15.5%. We think this dividend cut can represent a catalyst that will drive the premium to NAV lower, representing a selloff in shares relative to the underlying NAV. If the premium narrows going forward to a more moderate (but still high) 20% to NAV, this would imply 17% downside to the current share price of EDF.

The premium to NAV which we believe to be excessive is not necessarily a fault of the management team. The market for one reason or another simply chose to bid up shares to this level based on the supply and demand dynamics of the CEF structure. Our message here is that EDF at current levels is particularly high-risk in that a convergence lower in the premium would represent an incremental capital loss for shareholders beyond any consideration of the NAV performance.

It’s possible that the EM debt segment gains momentum, potentially driven by firming global growth expectations and rebound in commodity prices. In this scenario, we expect some of the more beaten-down CEFs to present more upside potential as their current discount to NAV should narrow based on renewed market enthusiasm while EDF would be limited by its already high premium. All else equal, we prefer to invest in funds that trade at a discount which may present more favorable risk-reward opportunities.

Large premiums to NAV are sometimes difficult to justify among closed-end funds and often lack a clear catalyst that can reverse such levels lower. In the case of EDF, we believe the dividend cut may be enough to turn sentiment on the fund and is just another weakness in addition to its relatively poor NAV performance history and excessively wide premium. We rate shares of EDF as a sell. Prospective investors should avoid the fund until a material correction in the premium materializes. Take a look at the fund’s last semi-annual report for a full list of risks and disclosures.

Disclosure: I am/we are long FEO. I wrote this article myself, and it expresses my own opinions. I am not receiving compensation for it (other than from Seeking Alpha). I have no business relationship with any company whose stock is mentioned in this article.