Since publishing my most recent article on Norfolk Southern Corporation (NSC), the shares are up about 14%, against a gain of 7.5% for the S&P 500. Given that the company has released financial results since, I thought I’d check in on the name again. I became bullish on Norfolk Southern last summer, when the shares were trading in the mid-$170s. A stock that is not very risky at $175 might be quite risky at $208, so I need to check in on the name again to see if it’s still worth buying. For those who can stand neither the suspense, nor my writing, I’ll jump to the point. Although Norfolk Southern is a fine company, the market has gotten ahead of itself, and it’s not worth the current price. That doesn’t mean that we’re forced to sit and wait for shares to drop in price, though, as it’s possible to make money by selling puts on this name. I’ve done that four times on this name, and I review my results below. I consider a short put option to be a “win-win” trade because the investor benefits no matter the direction of the stock. I’ll expand on this idea below.

The financial history of Norfolk Southern is, perhaps unsurprisingly, very similar to other Class 1 railroads. Returns to shareholders have been very good, in spite of very sluggish revenue growth. In particular, over the past eight years revenue has grown at a CAGR of ~.28%, but income from rail operations is up at a CAGR of ~3%, and net income is up at a CAGR of 5.7%. Earnings per share are up at an even faster clip (CAGR of 8.4%) as a consequence of an enormous stock buyback program.

Management has been very generous to owners, given that they’ve returned just over $15.8 billion to shareholders since the beginning of 2012. Just under $10 billion of this was from stock buybacks, and the balance from dividend payments.

The thing that I find most troubling about the financial history is the growth in long-term debt. It’s grown at a CAGR of about 4% over the past eight years, and there seems to be no end in sight, as debt was up 12.5% over the past year alone. In my view, it would be prudent for the company to stop spending as much on stock buybacks (they spent $4.853 billion in buybacks over the past two years), and start reducing indebtedness. I think this is especially important in light of the fact that the shares are not trading at an attractive price as will soon be shown (all figures are in millions, except per share amounts).

It borders on the tautological, but I need to make the point. Investing is about much more than simply buying growing cash flows. It’s at least as important to not overpay for those future cash flows. The reason for this in my view relates to the fact that the more an investor pays for a stream of future earnings, the lower will be their subsequent returns. For that reason, I want to be mindful of risk and want to ensure that I don’t overpay. There are a few ways in which I judge whether shares are reasonably priced or not. The first, and most simple, is a comparison of price to some measure of economic value (earnings, free cash flow and the like). In particular, I want to buy a company when it’s trading at a discount relative to both the overall market and to its own history.

The following graphic indicates that Norfolk Southern is actually on the high end of its historical valuation. Admittedly, the shares have generated positive returns when they traded at these levels in the past. That said, they generated even nicer returns when shares were less expensive. Given all of the risks inherent in investing, I think it’s prudent to only buy when it’s ideal to do so. The current valuation isn’t ideal in my view. 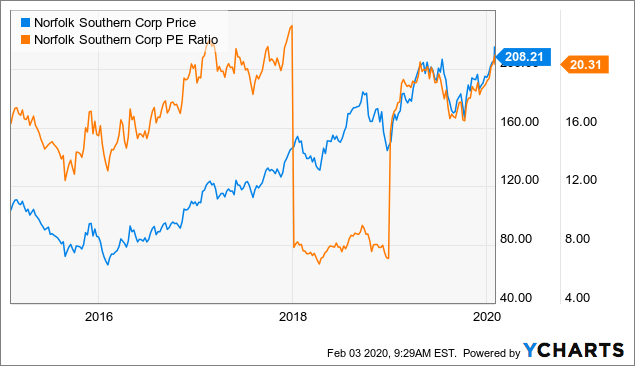 In addition to looking at the ratio of price to some economic variable, I also want to understand what the market must be assuming about the long-term growth of a given business. I do this by employing the methodology described by Professor Stephen Penman in his excellent book “Accounting for Value.” In this book, Penman describes how an investor can use a fairly standard finance formula, along with the magic of highschool algebra to isolate the “g” (growth) variable. This tells us what the market must be thinking about the future growth of the business. If the market’s view is too optimistic, that’s typically a bad sign, as rosy expectations eventually get dashed. At the moment, the market seems to be assuming a long-term (i.e. perpetual) growth rate of ~6.5%. In my view, that is a very optimistic, and therefore very dangerous assumption. Given the combination of valuations and assumptions embedded in the shares, I can’t recommend buying at these levels.

Just because I think the shares are overpriced at the moment doesn’t mean that I think investors have to sit around waiting for them to drop in price. I’ve been nervous about valuations here for the past two years, and have consistently recommended selling put options in lieu of share ownership. The following table outlines my results. I was exercised once, at a net price of ~$179, and that worked out well. I’ve also generated about $18 in put premia, which is just under 3 times the dividend income over the same period. In my view, these results suggest that it’s possible to generate very good returns at significantly less risk with short puts relative to long stocks.

Finally, another attractive thing about options relative to the shares is that we’re sometimes saved by delta. What I mean by this is that we can be wrong on the direction of a stock, but we suffer far less for that error in the options market than we do with the stock. For example, I very recently put out a very bullish call on Caterpillar (NYSE:CAT) (Caterpillar: Buy At This Price) in which I recommended that investors buy. The shares are down ~$12 since my article was finally published, but the put options that I recommended selling have moved up only ~$2. The market didn’t like Caterpillar’s results and drove the shares lower, but share price is still far above the strike price of these short puts. Things would have to be disastrous indeed for the shares to drop down to that level in my view. Also, as I stated in the article, if I had the opportunity to buy Caterpillar at a net price of ~$112, I’d certainly take it.

With all of that as preamble, I’d suggest another short put trade here. At the moment, I like the January NSC put with a strike of $175. These are currently bid-asked at $6.10-$9.10, having last traded hands at $8 even. If an investor simply takes the bid here, and is subsequently exercised, they’ll be obliged to buy at a price just under 20% below the current market price. Holding all else equal, that price would represent a P/E of ~15 and a dividend yield of ~2.2%. If the shares remain expensive, or simply flatline from here, the investor will simply pocket the premium, as has happened three times already over the past two years. In my view, when the results are good no matter the direction of the shares, investors would be wise to take notice.

Although Norfolk Southern is obviously a well run, and very shareholder friendly company, the shares have gotten ahead of themselves. Given that investment returns are largely a function of the price paid, investors should avoid overpaying. That said, just because the shares don’t represent great value at these levels doesn’t mean investors must patiently wait for them to drop in price. As my options history demonstrates, it’s possible to make a decent lower risk return while we wait for shares to drop. I think selling puts has proven to be a good strategy in the past, and I see nothing that’s changed that dynamic. For that reason, I can’t recommend buying shares, but I can certainly recommend selling puts.

Disclosure: I am/we are long NSC. I wrote this article myself, and it expresses my own opinions. I am not receiving compensation for it (other than from Seeking Alpha). I have no business relationship with any company whose stock is mentioned in this article.

Additional disclosure: I’ll be selling the puts mentioned in this article.