The political economy of South Africa is a mess. The South African government often fails to even provide basic services. For example, earlier this year, there was a wave of power outages euphemistically called “load shedding.” Inconsistent power devastated productivity. According to Transparency International, 18% of public service users paid a bribe in the past 12 months, and 64% of people believe corruption has become worse in the past year. A large portion of funds set aside for Covid relief were lost due to corruption.

South Africa’s Covid lockdown was among the strictest in the world, and consequently, the economic downturn has also been among the worst. The most recent unemployment rate is over 30% according to Trading Economics. GDP contracted at an annualized rate of 17.1% during 200Q2. For the decade, government debt has increased relative to GDP every year, and is currently over 62% of GDP. This year, the government deficit is expected to exceed 15% of GDP, the largest one-year increase since the end of apartheid. The weak economy and fiscally-unsound government have continued to undermine foreign capital inflows.

Unsurprising, South Africa is also cheaper than the broader EM universe, which is itself cheap by historical standards. The average P/E ratio for EZA is 14.62, compared to 15.49 for EEM.

Yet South Africa is home to many strong global companies that don’t depend on the South African Economy. Additionally, South Africa is a much more reliable jurisdiction for resource companies than other African countries, in spite of weakness in the local economy. Companies connected to South Africa might be unfairly discounted for non-economic reasons. These factors make EZA potentially interesting.

EZA’s portfolio is concentrated, reflecting the lopsided market cap distribution among South African companies. One company in the technology sector comprises 24% of the portfolio: Naspers (OTCPK:NPSNY). As is common in emerging markets, banks are a big portion of listed companies, so 27% of the portfolio is in financials. Additionally, South Africa’s economy is resource-driven, and 27% of EZA’s portfolio is in the basic materials sector, which includes a lot of gold miners.

The following chart shows the sector allocation of EZA: 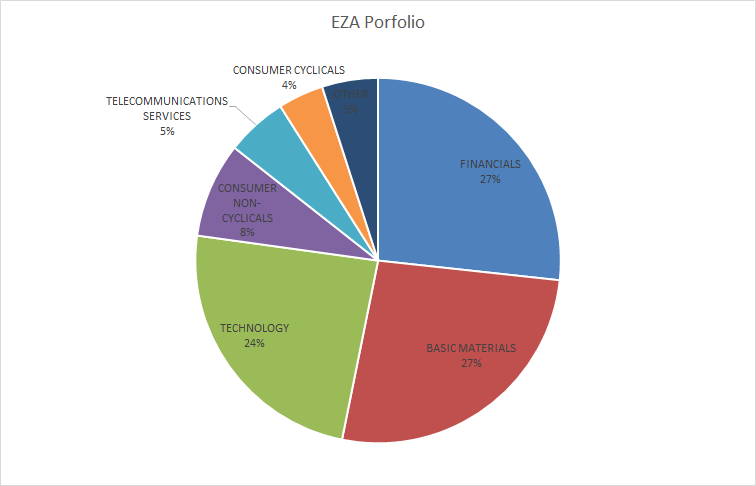 Notably, EZA has very limited exposure to the South African consumer. Only 4% of the portfolio is in consumer cyclicals.

This table shows the top 5 holdings in EZA:

Three of the top five holdings in EZA’s portfolio are gold miners. Their business is more closely tied to the global gold price than the local economy. One is a bank that is inevitably tied to South Africa’s economy, but also has much wider global exposure. Naspers earns only 17% of its revenue from within Africa according to data from Thomson Reuters. However, that figure likely understates the global reach of Naspers’ technology portfolio. Note that on the fund website, Naspers is classified as a “consumer discretionary,” which clearly doesn’t capture its actual economic drivers.

Naspers is basically a large venture capital fund that chronically trades at a large discount to its net asset value. Naspers has investments in fintech, social media, video games, cloud computing, e-commerce, food delivery, etc., etc. In 2001, Naspers purchased a stake in Tencent (OTCPK:TCEHY), a then-obscure Chinese startup. This investment grew from $32 million to over $600 billion. Other notable investments include OLX, a classified business with over 300 million monthly users in 22 markets, and Indian E-commerce company Flipkart, and Russian email company Mail.ru. Desert Lion Capital in a recent letter highlighted Naspers as a prime example of a strong global company trading at a discount because it’s listed in South Africa. The complex holding company structure also likely contributes to the chronic discount.

Naspers listed most of its non-South African assets on the Amsterdam exchange via Prosus (OTCPK:PROSY), as part of a plan to address shareholder concerns over the discount. It still owns ~72% of Prosus. Yet now Prosus itself trades at a discount. Ironically, the decision to list Prosus compounded the discount faced by Naspers shareholders, rather than unlocking value at least initially. Naspers trades at a ~29% discount to its share in Prosus, which in turn trades at a 23% discount to its shares in Tencent. On a look-through basis, Naspers trades at over a 40% discount to its ownership of Tencent alone, implying its net cash position, and all its other investments are worth more than zero. The Naspers stake exposes investors to China risk, but it seems to be way more than priced in.

Will this compounded discount ever close? A likely future course would be Prosus spinning out companies, or selling shares in order to fund large special dividends. Timing is uncertain, but it’s reasonable to expect that Naspers and Prosus investors will eventually benefit from the layers of value.

Although South Africa is a mess, its stock market holds plenty of potential value. I don’t yet see a catalyst that will drive foreign investor inflows back in so at this point, it’s probably better to approach South Africa from the bottom up. Rather than buying EZA, I’ll hold on to Naspers and a basket of gold miners. However, with expectations so low, the slightest bit of good news on South Africa’s macroeconomy will be a reason to start buying EZA.

Disclosure: I am/we are long NPSNY. I wrote this article myself, and it expresses my own opinions. I am not receiving compensation for it (other than from Seeking Alpha). I have no business relationship with any company whose stock is mentioned in this article.