We are getting tested

I was delighted by the string of big deals over the weekend as was revealed on Merger Monday. I wrote on Tuesday that this gave me hope that the stock market was operating at a healthy pace. We now see a slew of IPOs coming during the next few weeks. This will be the true test of market health. Like the function of every market, the value of stocks is impacted by demand (Like mergers and acquisitions) and supply (like secondary and initial public offerings). While we aren’t talking about commodities, supply clearly impacts demand and therefore prices, just like your professor explained to you in Econ 101. The buzz was white hot for Snowflake (SNOW) and that shook loose anyone with a dollar to want to participate. Most market participants have been lolled into being “all in” with no available dollars and so the selling has begun to pay for all these new-new things.

Snowflake was an anticipated IPO, especially with the news that Warren Buffett’s Berkshire Hathaway was investing $735 million pre IPO. SNOW was priced yesterday at $120, well above the initial proposed price and was marked up several times in the last few weeks ($75 to $85), and topped out at $100 before being priced ever higher at that $120 level. When it finally opened at $245 it was revalued to 100 times its current revenue. Adding to the froth the stock shot to $319 before it bounced off of the ceiling. There’s a very good chance that $319 level will not be seen again this year. In fact It broke below that debut level of $245 and last I checked SNOW is trading at $224. I’m not sure it will hold the 2 handle this week. In other words it left a lot of traders in the lurch. That kind of huge supply will provide a lot of resistance to upward momentum.

Look, Snowflake is a fantastic company, but I promise you that 90% of the people who bought it have no idea why it’s so fantastic, all they know is Warren Buffett bought it, he didn’t, his lieutenants at Berkshire Hathaway bought it. Let me not get in the way of a good back story. I’m not here to throw shade on SNOW, it’s a great company and in a world where data is more precious, and more difficult to get at and refine than gold, SNOW is a compelling service. It’s growing very rapidly so a substantial multiple of revenue might actually be a bargain, as crazy as that sounds. But over 100 times, or even 50-60 times, nope, nope, nope. Put another way, 100 times revenue means that it would take 100 years to get to even if every nickel was profit. Yes, of course SNOW is growing more than 100% per year, so yeah like I said some healthy multiple of revenue is justified, but now a lot of buyers at that elevated level will get hurt, and feel taken advantage of. JFrog (FROG) also IPOd yesterday, and while it didn’t hit 300, it shot up as well, and is down as well. At the IPO FROG was priced at 44 above the proposed range of 39 to 41 for a valuation of four billion dollars… really?

I was very excited about SNOW as well, and told friends and family about it. When I saw the offer price and the buzz building for it, my enthusiasm was chastened. I decided to sit this one out, and I am still sitting it out. I see a strong parallel between SNOW and another stock that skyrocketed on an equal trajectory – BigCommerce (BIGC). Let’s look at a chart here.

This is just the first few days BIGC soared many multiples of its IPO price to more than $100 then promptly slid all the way back to $64. Let me give you the fuller chart to give heart to those who were top-ticked yesterday here. 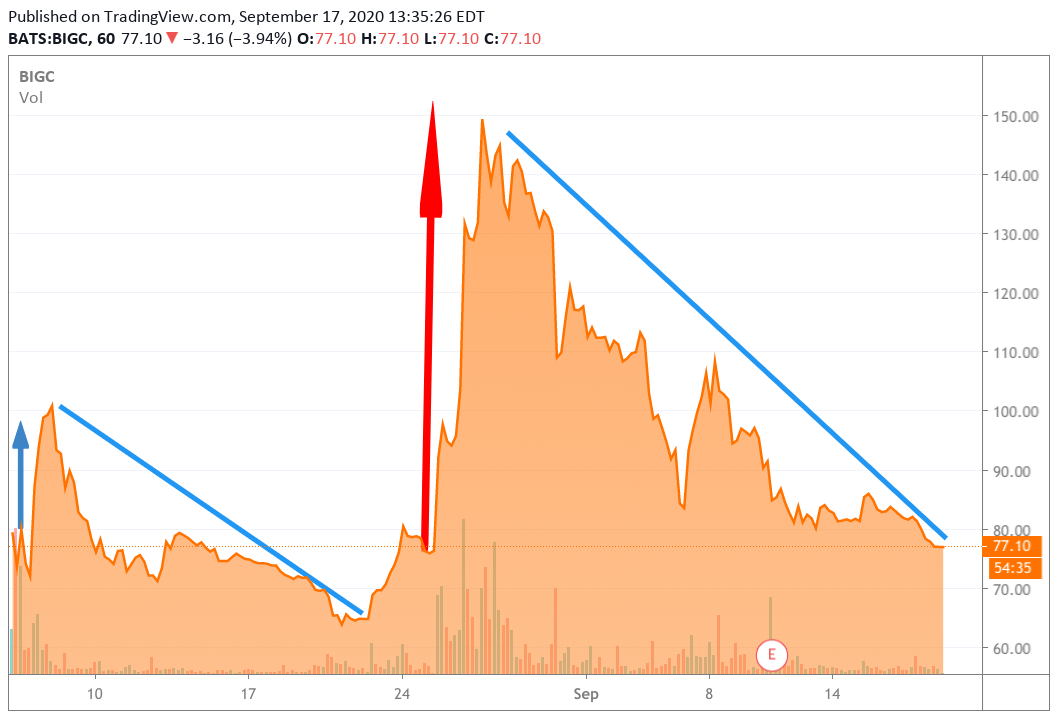 After BIGC bottomed it surged not only to old highs but up another 50% to nearly $150. I don’t think the same will happen with SNOW, but maybe if someone is humble enough to realize that if they bought SNOW at the high $200s to $319 for a trade that they blew (face it, you did). Said trailers may not see that level for months, even to 2021, probably after the second earnings report. What I’m delicately trying to tell you is that if SNOW falls at the equal proportion as BIGC we could very well see SNOW below 200. If you can take that kind of pain great, if you did not jump in yesterday and are thinking of picking it up now, wait until Monday to start buying in very small increments.

Here are the rules:

This bears repeating: If you are trading and you get caught then as always don’t turn that into an investment. Be a big boy or girl and take the loss. I don’t want to rub it in to those who did get caught in SNOW, but I’m skeptical that we will see that $319 level for many months, and it might take very long to get any kind of return above that to justify holding it for six months. Traders, be brave, you know what you need to do. The old Wall Street adage “your first loss is your best loss” rings very true here. In the span of 3 to 4 months if you are a decent trader you should be able to find better places to deploy that stranded capital and create some alpha.

If you truly bought it for an investment that I hope to god that you bought a few shares now and are looking to build a position over time. Then it doesn’t matter that you started too high for the first few shares.

While everyone is focused on the new IPOs, look elsewhere

Another tactic is to use the current sell-off we are experiencing to buy some of the high fliers that everyone else is selling. If you always wanted Nvidia (NVDA) – it’s trading 100 points below its ATH. How about Okta (OKTA) – it’s selling at 190ish and it was just at 231 its recent ATH. Also how about the aforementioned BIGC? What am I saying, as always, be contrarian. Everyone is rushing for the next new shiny object, look for the sustainable shiny objects that when the shine comes off of this IPO, market participants will go back to the tried and true gems. You don’t like BIGC, how about the OG, Shopify (SHOP)? SHOP was 1150 the All-time-high and now it’s trading at $862. Look around for the great names you always wanted, they are on sale.

This is not the “Big One”

Today’s sell off is par for September. I believe we are holding the 50-day moving average. I suspect that we will chop around here for the next few weeks. If you are a good stock picker there are plenty of areas to invest and trade into, not just tech stocks, cyclicals are showing strength, materials and also the consumer sector, cars and homes. We also are getting to the point that travel may very well rally very strongly as we hear of antivirals and vaccines. So part of the sell off in tech is not just about the IPOs. The US and Chinese economies are regaining momentum. So this is not the start of a bear market, the Fed is not going to raise rates ever again (kidding but almost). So even though everyone is on edge about the election and the virus, this is probably one of the best trading environments in decades. Please don’t sell in a panic. This is a great time to go through your portfolio and trim your losers. Starting Monday reallocate those funds. Tomorrow, I suspect we will have some continued selling due to margin calls, and fear of carrying stocks into the weekend.

Hope is not a strategy

I think the odds are better than 50/50 that we will have a fiscal deal in the next week or so. Also, we should have more positive pandemic news that the market will decide to seize upon. If so, we should see a very strong rally going into October, then I suspect we’ll have one more big sale going into the election. I didn’t trade today, so no trades to talk about. I’m holding my cash to perhaps buy into the close tomorrow at what might be the lows, or I’ll wait to Monday. You don’t have to trade every day…

Hasbro (NASDAQ:HAS) is a name that we bought on the large decline and encouraged members in our chat service to do so, since shares were under $70 back in the spring. You see, the initial […]

GBP price, Brexit news and analysis: GBP/USD continues to slide modestly lower as the EU-UK talks on a trade deal once the Brexit transition period ends keep going. However, no progress is likely before the […]