You know that you are dealing with a special company when its name is turned into a verb. For example, when you want to do an internet search, you “google it”. The word google has even made it into the Oxford English dictionary. Well, there is another verb that has been making its rounds and that is the word slack, as in “just slack me”. This term is in reference to sending a message using tools provided by Slack Technologies, Inc. (WORK). Slack has gained an impressive user base with more than 700,000 active developers and 12 million daily active users.

But despite the exceptional performance to get this far, I have some issues with the company as far as an investment goes. I believe that Slack’s stock is overvalued and the company is having trouble competing with Microsoft Teams, as evidenced by the rapid deceleration of revenue growth. In addition, this company is burning cash at a very high rate. So if I ever write a bullish article on Slack, then don’t slack me, instead “just slap me”. Slap me back to reality.

I did check to make sure that slack is not a verb in the Oxford English dictionary (yet). When it makes it into the dictionary then maybe I’ll change my rating from neutral to something more positive.

Putting aside for the moment the work-from-home movement due to the pandemic, it appears that Slack’s growth is rapidly decelerating. This can be seen from Slack’s own presentations which show a decrease in customer base growth from 56% YoY to 25% YoY in just 6 quarters. 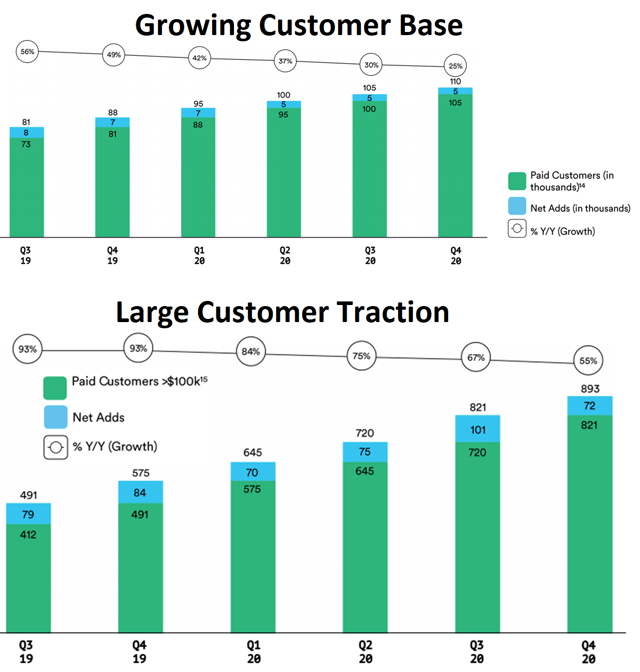 The growth deceleration can also be seen in terms of growth in calculated billings which have decreased from 75% to 48% in the last 6 quarters.

The deceleration in growth may be explainable by examining surveys such as the one by ETR+ which shows slowing growth among the largest enterprises. 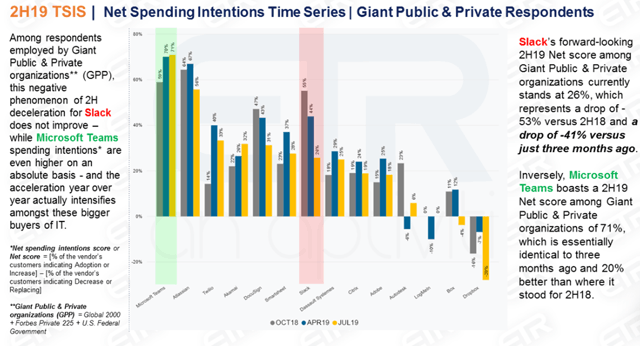 This survey was conducted back in mid-2019 and shows that Slack’s forward-looking 2H19 Net score dropped considerably to 26%. Meanwhile, Microsoft Teams Net score improved to 67%. According to the survey, Microsoft Teams is winning the battle against Slack when it comes to overlapping customers.

“128 Giant Public and Private organizations indicated a 2H spending intention for Microsoft Teams. One third of those (42) are also Slack customers – and among these shared customers, Slack has a 2H Net score of -2.4%.

Since July 2018, the number of Giant Public & Private customers shared by Microsoft Teams and Slack has grown 68%, and simultaneously over the past year, Slack’s Net score in these shared accounts has dropped from 56% to -2.4%.”

It appears that companies already have Office 365 and Microsoft Teams essentially comes for free with Office 365, making Microsoft Teams the logical choice unless there is a significant difference in performance.

“Large organizations spent the last three years moving to Azure [cloud services] and to Office 365 … They’re going to go with Teams unless there’s a dramatic difference with price and performance.”

The COVID-19 pandemic has led to a seismic shift to a work-from-home strategy. This event, although short in duration, has undoubtedly benefited both Slack and Microsoft Teams. Both have indicated a significant jump in users.

Slack has already exceeded last quarter’s customer growth in the first half of Q1. According to Slack CEO Butterfield:

And Microsoft Teams use has also spiked with more than 44 million daily active users, “up from 20 million in November.”

While it is difficult to say how these two companies are going to perform as the pandemic plays out and global recession kicks in. But it appears that Microsoft is winning the market share. 44 million daily active users is significantly more than what Slack boasts.

Another indicator that illustrates Microsoft Teams’ positioning is the interest over time extracted from Google Trends.

As can be seen from the two charts below, Microsoft Teams has been an extremely popular search term since the outbreak of the virus, much more impressive that the increased interest in Slack. 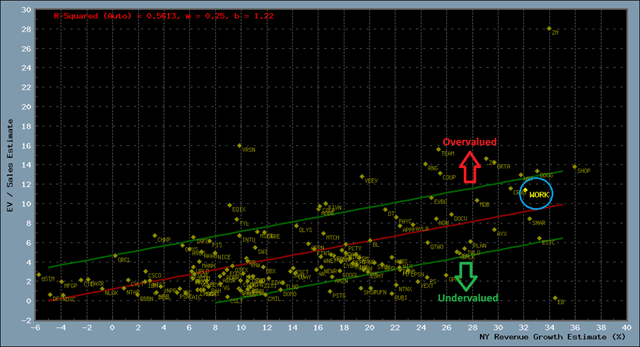 A best-fit line is drawn in red on the scatter plot and represents a typical valuation based on next year’s sales growth. As can be seen from the scatter plot, Slack is sitting above the best-fit line, implying that the company is overvalued based on forward sales multiple. The overvaluation is likely due to the company’s status as a high-revenue-growth stock and the fact that it operates in the remote collaboration niche.

I monitor a company’s cash burn by examining the SG&A expense relative to sales. Normally, I look at the trailing twelve months (TTM) but since Slack IPO’ed less than one year ago, I am using the quarterly figures as the TTM figure is affected by stock-based-compensation at time of IPO.

Slack is spending 137% of its total revenue on SG&A expenses (and R&D). This means that the company is spending 37% more on SG&A plus R&D than revenue intake.

I generally don’t ever like to see this kind of cash burn and it may explain the recent announcement of the $600 million convertible senior notes quickly updated to $750 million. While this might be a smart move given the global market turbulence, investors should keep in mind that the convertible notes do not come for free. There is a pretty significant cost for (partially) hedging against the possibility of share dilution:

“Slack intends to use approximately $91.8 million of the net proceeds from the offering of notes to pay the cost of the capped call transactions.”

My fear is that the SG&A expense margin could rise fairly substantially in the expected global recession and this would be something that Slack cannot afford.

Slack is a player in the collaboration market niche which is one of the highest-growth digital transformation sub-industries. Slack has a very popular communications platform with more than 12 million daily active users and 700,000 active developers.

Slack grew revenue 57% in the most recent 12 months, but it appears that revenue growth is decelerating at a fairly rapid pace. I believe that much of the deceleration is a result of competition from Microsoft Teams. While I believe that Slack offers a superior product, you can’t argue with “free”. Teams automatically comes with Office 365 and is also the default application with Windows installations.

I also believe that Slack is burning too much cash. SG&A expense plus R&D is 137% of total revenue, meaning that the company is spending 37% more on SG&A than it is taking in. This doesn’t include the cost of revenue.

While I expect that Slack will exceed analysts’ estimates in the coming quarter due to the pandemic/work-at-home phenomenon, a global recession will knock down the company’s revenue fairly substantially. The share price is already overvalued according to my relative valuation scheme. Therefore, I am giving Slack a neutral rating.