Q4 results for Skechers (SKX) were positive on several fronts. Looking at headline numbers, we saw a solid revenue beat and an acceleration to 23.1% y/y growth, plus a 25.8% y/y growth in diluted earnings per share. As it has been the case for a while, the international segment outperformed the domestic one in terms of growth with a 31.2% increase in sales vs. a 13% increase for the domestic segment and led international sales to account for 59.3% of total sales.

Both comps and revenue accelerated compared to the previous quarters. On a y/y basis, revenue growth has almost reached the peaks of Q4 2017: 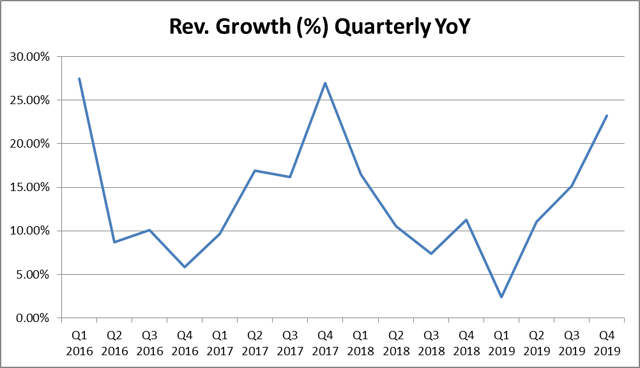 And the same for comps growth: 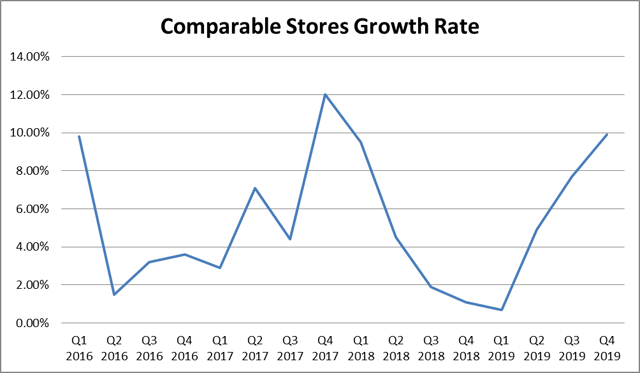 A key aspect to analyze for a growing company, especially in a sector such as the consumer sector, is the quality of growth. When I refer to quality of growth, I am referring to the key drivers of growth in revenue, as it’s important to understand whether a company is growing thanks to a process of value creation or simply through excessive expansion or dumb capital allocation.

One of the first things I want to see is a reasonable ratio between comparable stores’ growth and total revenue growth. A company that pushes growth through store expansion at the expense of comps is, more often than not, allocating its capital in an ineffective way.

In Skechers’ case, the ratio between comps growth and revenue growth has been quite volatile and, while it had improved in the past few quarters, it dipped again in Q4. 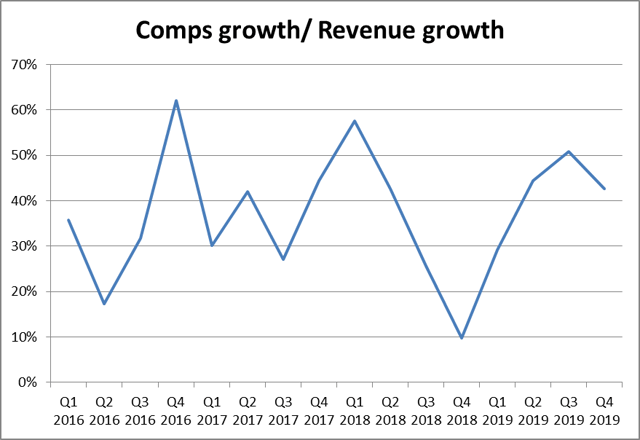 While one quarter doesn’t tell a story, it will be necessary to keep monitoring this ratio.

Skechers does business through several channels, including owned stores, franchised stores, e-commerce and wholesale. In the current environment, these segments can rarely be analyzed separately. Customers are active on several channels, and each of these segments influences the performance of the other segments. That’s a known problem in the industry and one of the reasons why many retailers tend to avoid closing underperforming stores when they expect a negative impact on the other channels.

That’s why I am still comfortable with looking at metrics such as revenue per store and operating income per store. The analysis of these metrics shows a significant difference between the current performance and what we saw in a period of similar growth such as 2017.

Revenue per store has recently flattened and even started to expand again, while it was falling sharply in 2017: 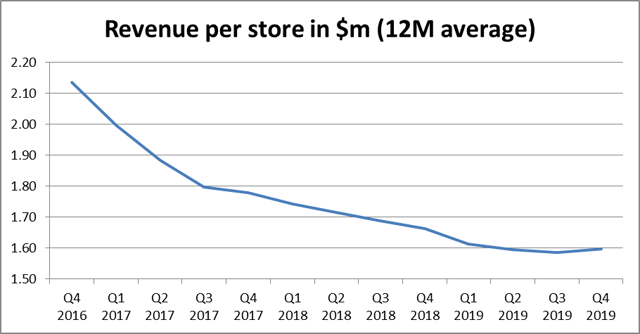 The same happened to operating income per store, which actually bottomed out several quarters before: 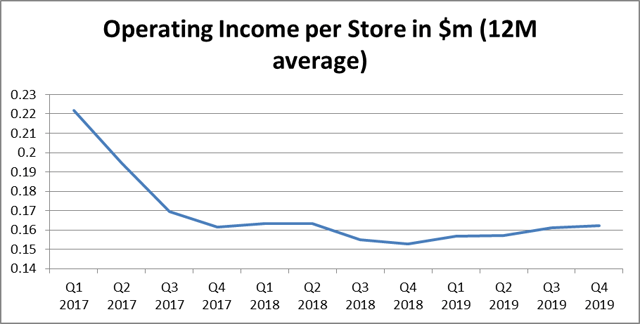 Overall, these trends show some improvements in fundamentals and improving prospects of margin expansion. Growth is much more balanced than it was before and much less exposed to aggressive expansion.

A positive aspect is that gross margin has expanded from 47.7% to 49.7% despite the solid revenue growth/acceleration and despite the potential negative impact from tariffs. If we want to take this at face value, it’s an indication that growth hasn’t been generated by aggressive selling practices or aggressive discounts. The negative aspect here is that the operating margin has contracted 60bps from 7.7% to 7.1% due to a more than proportional increase in SG&A, which may suggest strong activity on the marketing side.

Like the other metrics, Skechers’ margins are quite unstable and volatile. One positive though is that when we zoom out a bit and consider the full-year results, we see a flattish gross margin (down 20bps to 47.7%) and an operating margin slightly expanding (up 50bps to 9.90%) despite the aggressive growth. In periods of similar growth such as in 2017, Skechers was operating at an operating margin of 9%, so there has been some positive operating leverage in the meantime.

Something worth mentioning is that Skechers is basically delivering the same revenue growth it was delivering in 2017, without the same aggressive expansion in the number of stores.

As we can see in the chart below, the growth rate in store count is substantially lower now: 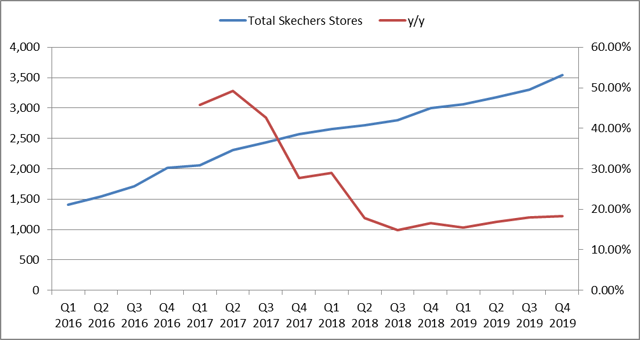 Guidance for Q1 2020 was quite weak, which is reasonable considering the negative impact of the coronavirus in China and the store closures and declined traffic that followed. Revenue in the range of $1,410 to $1,425 implies y/y growth of around 10%, which is quite a sharp deceleration compared to the previous few quarters, although it would still be a solid result considering the context. The EPS guidance of $0.70-$0.75 is also nothing exciting as it shows flattish y/y trends and, in the management’s own words, could significantly deteriorate if the situation in China worsens further. This is particularly important for Skechers as most of the store growth is coming from China and most of the new openings are supposed to be in China.

My concern here is that the company has reported quite a sharp accumulation in inventories, which increased 24% y/y and 20% q/q, as the management was probably preparing for a much better Q1 than we can now expect after the explosion of the coronavirus crisis. Even though the situation in China could be transitory and may resolve soon, I am afraid that the sharp accumulation in inventory will have a significant impact on profitability in the next few quarters that may not be fully reflected in the current guidance. The management also confirmed that there might be some consequences in the coming quarters:

I would continue to point to our revenue growth as our upper bound probably, again the global caveat there being China, we’ve again – we’ve incorporated some latitude throughout our P&L.

It may be that we need to spend some money in China to reignite operations. It wouldn’t surprise me if there is a quarter or two where we need to deleverage in China, specifically. But quite frankly until we get better informed about how that is going to unfold, it would be difficult to really project with specificity when or how much that’s going to be.

From a technical perspective, Skechers stock has been very interesting. It’s still trading within a large long-term trading range to which it has recently reacted, and it has recently posted a breakdown of a rising wedge formation as the coronavirus crisis was unfolding. With the recent results initially perceived very positively by market participants, Skechers has tested the upper bound of the trading range, where it faced strong reaction. 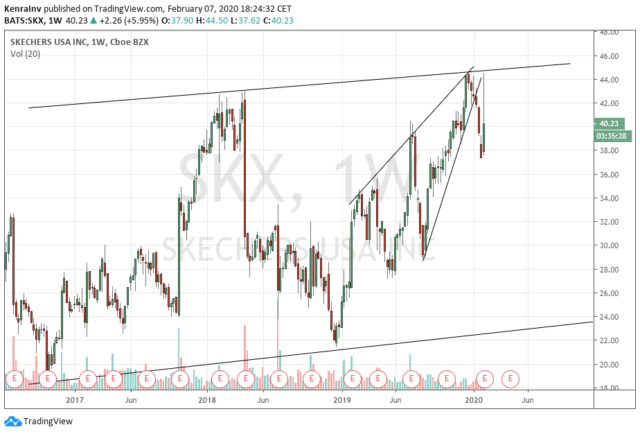 While I believe that the recent fundamental improvements on several fronts suggest that Skechers’ valuation multiples should be higher than they were in the 2016-2018 period, the coronavirus crisis in an important market such as China can stand in the way of multiple expansion, especially if there are repercussions in terms of excessive inventory accumulation and margin pressures. I see it difficult in the short term to create a good bullish case, although the long-term prospects for the company look better than before.

Q4 showed several improvements on many fronts for Skechers’ business. Growth is not coming from aggressive store expansion as it was in 2017, while per store metrics and margins are showing some improvements as well. I think Skechers is a much healthier company vs. 2-3 years ago. However, the recent Coronavirus crisis is standing in the way of multiple expansion and could have negative repercussions in the next few quarters. I am generally starting to be bullish on this stock again but caution is needed and I don’t see the current situation as a good entry point. Skechers remains an interesting growing company with improving fundamentals but still a relatively weak player vs. peers in terms of brand equity, pricing power and operating history, which is reflected in highly volatile results. I will personally look for a better entry point with at least a better technical picture and hopefully some confirmation that the damage from the coronavirus crisis is somewhat limited.

Hello All. I recently started a pty company to start trading options. Ideally I would like to trade ASX & international index and stock options and was wondering what brokers offer these products? I tried […]

Justin Sullivan Intel Corporation (NASDAQ:INTC) is a multinational technology company that specializes in designing and manufacturing computer hardware and related products. The company’s stock price is a measure of its financial performance and an indicator […]