We are now in the ninth month of 2020, and the range in the silver futures market is already an incredible $18.175 per ounce. The last time we witnessed a wider trading range was in 2011 when the volatile precious moved within a $23.675 range in the nearby COMEX futures contract. In 2011, silver reached its highest price level since 1980 when it traded to $49.82, just 54 cents shy of its record peak.

On Friday, September 4, nearby silver futures settled at $26.712 per ounce, $3.203 below the high for 2020, but $14.972 above the low. Late last week, the stock market faltered from the latest all-time high. In March, the global pandemic caused a sudden downdraft in stocks, which led to the risk-off conditions that sent silver spiking to its lowest price since 2009. The price carnage in the silver market set the stage for an explosive rally that took the price to its highest level since 2013. The eleven-year low led to a seven-year high.

The latest correction in stocks could be the start of a deeper correction that weighs on other assets, including silver. I would view a significant move to the downside in the silver market as another compelling opportunity to buy the metal.

Another correction in the silver market could create a scale-down buying opportunity in the two silver ETF products, which tend to underperform the metal when the price drops and outperform during rallies on a percentage basis.

The nearby COMEX silver futures contract closed at $17.90 at the end of December 2019. After a rally that took the price to a high of $18.92 in February, the bottom fell out of the silver futures market.

As the weekly chart highlights, risk-off conditions sent the price to a low of $11.74, the lowest level since 2009, in mid-March. Silver fell through critical technical support at the December 2015 low of $13.635, causing selling to accelerate. In April, the price was back above the $14 per ounce level.

The downdraft launched an incredible rally

The downside spike in the silver market turned out to be short-lived. In May, the price was back above $18. In June, the price consolidated. In July, the silver market took off on the upside, rising above the July 2016 high and critical technical resistance level at $21.095. Just as the downside technical break unleashed selling that took the price to an eleven-year low, the upside break pushed silver to a high of $29.915 per ounce in August, the highest price since early 2013. The eleven-year low gave way to an over year-year high just five months later.

At just below the $27 per ounce level at the end of last week, weekly price momentum and relative strength indicators remained over neutral readings near overbought conditions. Open interest, the total number of open long and short positions rose from a low of 131,830 contracts on May 4, in the aftermath of the price carnage to a high of 207,490 contracts on August 6, as the price of silver was hitting its most recent high. Weekly historical volatility rose from 25.63% in mid-July to over 52% at the end of last week as the trading ranges expanded.

The downside spike ignited the buying that took the silver futures market to just shy of $30 per ounce on the continuous futures contract.

A drop on risk-off could create another bargain

Last week, after rising to a new all-time high, the S&P 500 index suffered its most significant correction in months.

As the weekly chart shows, the S&P 500 fell from a new record high at 3,397.50 in mid-February to a low of 2,174 in March. The significant drop in the stock market index precipitated the downside spike in the silver futures arena.

The V-shaped recovery took the S&P 500 to a new high of 3,587 on September 2 but selling returned late last week. Time will tell if a correction will be a short-term event as it was during the week of June 8, or if another substantial period of selling as we witnessed in February and March is on the horizon.

Silver and many other markets are likely to follow the stock market if another substantial correction is on the horizon.

Three reasons an all-time high is on the horizon

Time will tell if the volatile silver market is about to experience another correction. Technical support is now at the breakout level of $21.095, as the high from July 2016 that had become critical resistance is now support. Since August, silver’s low has been $23.58, which is the first level of short-term technical support on the weekly chart.

I expect silver to continue to make new highs over the coming weeks, months, and perhaps years. Three compelling factors are likely to push the price of the precious metal higher.

Central bank liquidity, pushing short-term interest rates to historic lows, and capping rates further out along the yield curve are bullish for the prices of all commodities, and silver is no exception. Simultaneously, government stimulus programs that increase deficits are a supportive factor for both gold and silver prices.

The dollar is the world’s reserve currency and the benchmark pricing mechanism for all commodities. A falling dollar tends to be a bullish factor for silver and gold prices.

The weekly chart of the dollar index shows that the Us currency fell from its highest level since 2002 in March to the lowest since 2018 recently. The dollar index broke through its technical support level at the September 2018 low of 93.395 and was trading at the 93 level at the end of last week.

The bullish trend in the dollar that had been in place since February 2018 ended and the downside target now stands at the low from that month at 88.15. A weakening dollar is supportive of the price of silver.

Finally, the US Federal Reserve told the world that it is prepared to tolerate inflation above the 2% target rate to stimulate the economy. The acceptance of rising inflation could be the most bullish factor for silver over the coming months and years.

I expect silver to rise above the $30 per ounce level sooner rather than later. Moreover, a challenge on the all-time 1980 high of $50.36 could be in the cards in 2021. Gold recently rose above its record high when it traded to over $2000 per ounce. Bank of America’s analysts expect the yellow metal to rise to $3000, and higher levels are possible in the current environment.

If silver is heading higher, silver mining companies are positioned to take advantage and tend to offer even higher percentage gains than in the silver futures market on COMEX. Mining shares offer leverage when it comes to the price action in the silver market.

Much of the silver comes as a byproduct of other metal and ore production. However, silver mining companies involved in primary production stand to profit if silver is heading for record levels.

The fund summary and top holdings of SILJ include: 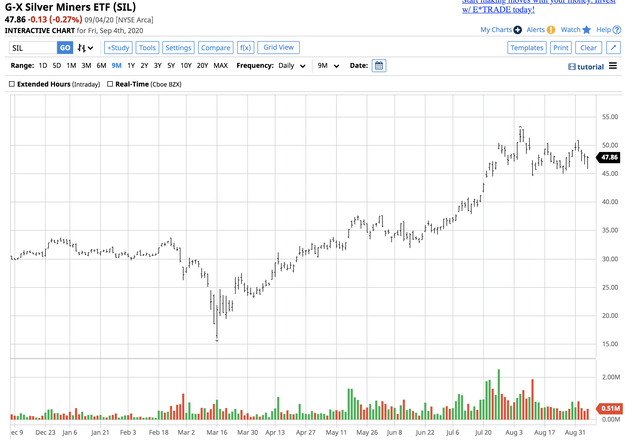 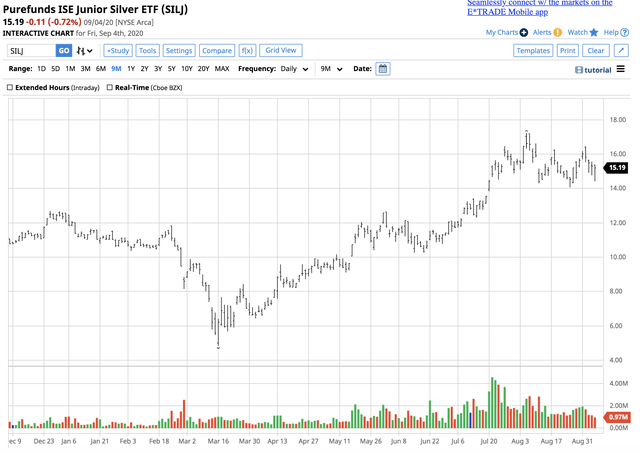 If silver is heading for another correction along with the stock market, buying SIL and SILJ on a scale-down basis leaving plenty of room to add on further selling, could be the optimal approach to investing in the volatile precious metal. I think we will see silver rise to a new record high over the coming months and years.

The author is long silver.