My investment thesis on Silicon Motion (SIMO) continues to be based on the company’s ability to capture market share based on its moat in developing and supplying NAND flash controllers. But investors should not become infatuated with the company’s recent double-digit growth explosion.

On the other hand, a well-informed investor would have noticed the illogical market reaction to analysts’ observations. The company guided for a dramatic drop in first quarter gross margin. Analysts suspect management is being too conservative.

History of a Slump

In 2017, NAND flash makers migrated from 2D (planar or single layer of memory cells) to 3D (stacked vertical layers of memory cells) production. Supply became tight, very tight, and prices soared higher. The industry faltered and Silicon Motion was not excluded from the turmoil. The company issued warnings all through the journey but continued to reenforce its position as the leading supplier of NAND flash controllers worldwide.

Overall, while we continue to face headwinds from ongoing, but temporary NAND flash tightness, we are excited by our strong pipeline of new design wins and backlog across all of our major product segments. (emphasis added)

Revenue slipped in 2017. When it reported 2017 year-end results, Silicon Motion optimistically projected a rebound for 2018, expecting to exceed not only the 2017 revenue total but also the 2016 total. Things were on track until second quarter reporting in late July of 2018. By 2018 third quarter reporting, Silicon Motion waved yet another warning flag, this one more dire.

When 2019 began, industry pressure was so heavy, Silicon Motion, atypically, didn’t offer full-year guidance. The turmoil continued through the first three quarters of 2019. But with third quarter reporting in late October, the horizon began to clear.

Silicon Motion initially projected revenue for the fourth quarter in a range of $133 million to $139 million – a significant improvement over the third quarter total of $110.5 million. On January 7th, the company offered preliminary fourth quarter results and adjusted its revenue projection to “within 10% above the high-end”. This meant the new revenue projection was $139 million to $152.9 million, with a midpoint of $146 million.

As mentioned earlier, Silicon Motion set a fourth quarter record high for controller sales and revenue improved 32% year over year. It also topped the high end of the company’s preliminary adjustment of $139 million to $152.9 million, albeit slightly, and delivered $153.2 million on a GAAP basis, $153 million on a non-GAAP basis.

Though sales rallied in the final quarter, on the year, Silicon Motion’s revenue at $457 million was 14% less compared with 2018 at $530 million. 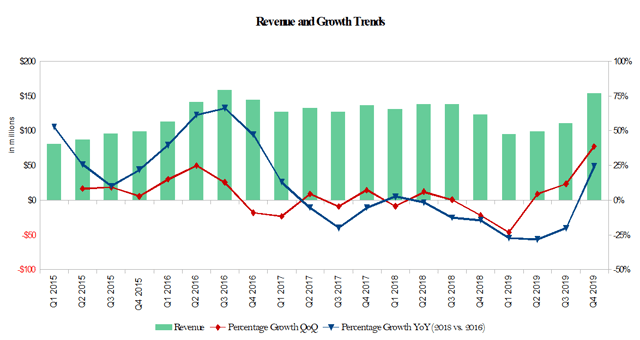 Silicon Motion has been projecting a better year in 2020 since the third quarter.

Sales visibility has improved considerably since earlier this year, and based on what we are seeing from our customers’ procurement plans, our SSD controllers, eMMC+UFS controllers and SSD solutions are all expected to deliver solid growth next year.

It reaffirmed the outlook in the fourth quarter.

We expect our SSD controller sales, now representing over half of total revenue, to continue to deliver solid growth as we expand our OEM exposure. We anticipate that our eMMC+UFS controller sales will return to growth this year as UFS adoption in smartphones increases. We believe that our SSD solutions will also return to growth this year as Chinese hyperscalers adopt more of our open-channel SSDs in their data centers and as our differentiated industrial SSDs diversify further into automotive, data networking and other applications.

Silicon Motion supplies SSD controllers to five of the seven NAND flash manufacturers. The company expects manufacturers to continue to increase the adoption of SSDs into their PCs, game consoles and other client devices.

As a result, the company anticipates capturing more market share.

Based on our current customer procurement forecast, we believe we should be able to grow our SSD controller sales 15% to 25% in 2020, exceeding the 13% market growth projected by industry and others, such as Gartner.

Our module maker customers have been expanding their sales from smart set-top boxes to speakers and TV and to Tier 3 and Tier 4 smartphone OEMs.

The company is also benefiting from the migration to 4G and 5G in the smartphone market.

Through its SSD Solutions segment, Silicon Motion’s efforts with Alibaba (BABA) should begin gaining traction in 2020. As well, the company has its sights set on industry diversification in this segment.

I think the automotive sector – it will be our long-term growth driver. We have spent 5 years to develop this solution and design win. We believe we have built a significant pipeline for the automotive industry.

The company provided revenue guidance in a range of $130 million to $138 million for the first quarter and a range of $539 million to $584 million on the year. Though some may be disappointed the company is not expecting consecutive quarterly growth, it is pertinent to recognize the midpoint of the first quarter range at $134 million does represent growth when considering seasonal trends. Previously, the highest first quarter sales production was $130.3 million in 2018. 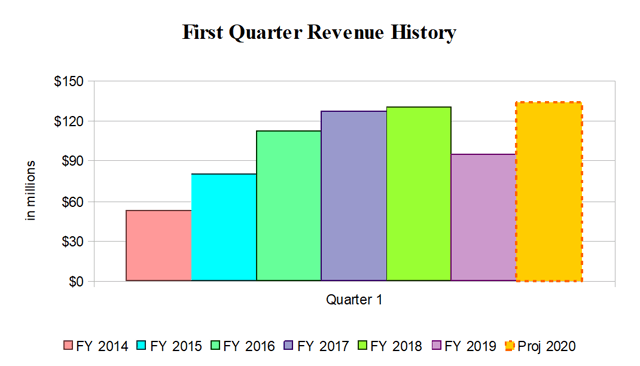 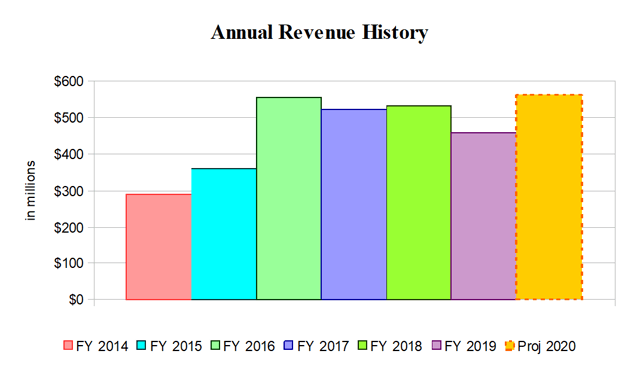 It is especially pertinent to note there was to be a difference between the two years regarding what is reported in the revenue bucket. In the third quarter, Silicon Motion explained revenue will be impacted in 2020 and beyond by a new consignment arrangement with Alibaba. It will no longer procure and inventory the NAND for Alibaba’s business. Thus, it will not be exposed to NAND price fluctuations. The repayment for the cost of the NAND will no longer register as revenue so it was expected the revenue bucket would reflect decline.

But, it was not the growth in revenue, according to Seeking Alpha news interpretations, sparking analysts’ attention. Rather, SA reported some analysts “have questions about the Q1 gross margin outlook”. Silicon Motion guided for a gross margin range of 44% to 46%. This appears alarmingly lower than the 2019 full year non-GAAP gross margin of 50.1%.

In its third quarter reporting, relative to Alibaba’s business, the company stated it expected the change in processing to improve gross margin in its SSD Solutions business. It offered more clarity in the fourth quarter earnings call – inclusive of a reminder sales to Alibaba will be “lumpy” and not evenly spread quarter to quarter.

While higher gross margin consignment sales to Alibaba will begin in the first quarter, they will not be significant enough to provide a benefit to gross margin until the second quarter.

Until our Alibaba sales levels achieve sufficient economies of scale, we will be dependent on the sale of low margin standard NVMe SSDs to Chinese Internet companies.

Until Alibaba consignment sales scale up, SSD solutions gross margin will remain low, roughly half of our corporate average.

It had also projected gross margin improvement in its UFS controller business.

We believe in the near future, especially 2020, we will see more PCIe controller and UFS 2.1 move to 3.0 and will benefit for higher ASP and better gross margin.

But, it should not be ignored, sales of SSD client controllers contribute over half the company’s revenue. Still, some analysts are questioning whether the company is being too conservative. In response and quoting Homer Simpson, “D’OH!”. Not a technical term but it is the most efficient in this case. In my coverage of 2018 full-year results in February 2019, I penned this observation.

I’ve been covering Silicon Motion for five years. It has consistently offered cautious guidance and often beat on the high side – the epitome of under-promise and over-deliver. In a nutshell, management has proven its trustworthiness. (emphasis added)

The company’s share price appeared to take a hit on news of these “concerns”. From a close of $48.94 on February 6th, shares dropped as low as $45.11 on February 7th and closed at $47.04, down 4%. The direction appears backward. If the company is, indeed, being too conservative with its gross margin projection, the bottom line should improve not decline.

In fairness, neither the company nor analysts nor shareholders can ignore the yet-to-be determined impact of the coronavirus outbreak. So, it could be argued the company’s shares fell in line with the general market’s concern of such. But, that would be only partially true as the general market did not fall 4% on February 7th. In a nutshell, the market reaction to Silicon Motion’s earnings is illogical – which is, unfortunately, not a surprise historically.

Silicon Motion has over $325 million in cash and short-term investments and is debt-free. It pays an annual dividend rate of $1.40 per ADS. As well, investors may reasonably expect the company to repurchase shares when the market overreacts as it has approximately $140 million still available under its November 2018 authorization.

If revenue in 2020 at least recovers to the 2016 range and the outstanding share count is trimmed to 35 million, even if adjusted non-GAAP net profit margin registers as low as 17%, there should be increase on the bottom line. Thus, with a stock price below $50, shares are trading at a cash-adjusted forward P/E ratio less than 15.

For potential investors and alert shareholders, dips like the one on February 7th could certainly be considered buying opportunities.

Disclosure: I am/we are long SIMO. I wrote this article myself, and it expresses my own opinions. I am not receiving compensation for it (other than from Seeking Alpha). I have no business relationship with any company whose stock is mentioned in this article.

Additional disclosure: I belong to an investment club that owns shares of SIMO.