This article was highlighted for PRO+ subscribers, Seeking Alpha’s service for professional investors. Find out how you can get the best content on Seeking Alpha here.

Delta Apparel is generic clothing wholesaler with a lifestyle clothing brand. It’s purchase of Salt Life initially gave DLA some brand power, but its brand is fading and appearing more like a fad. Its other brands offer clothing in the casual and athletic apparel segments but is has harsh competition from other high-end athletic apparel and generic clothing companies that enjoy economies of scale. Management has decided to expand into areas in which they have even more unfavorable economics: Custom T-Shirts and Beer. Paired with a worrisome balance sheet and lofty valuation, I believe Delta Apparel could drop by over 50%

Apparel operates in two main segments. The Delta Group represents about 90% of revenue. They are made up of generic clothing and a few low-quality brands. The other segment is Salt Life, which is a lifestyle brand representing around 10% of revenue. Delta’s management hopes to capitalize in its expertise in generic clothing by going into the custom T-shirt business with a focus on small orders that need fast delivery. They also seek to grow the salt life brand through new stores, restaurants, and beer. However, I believe management is destroying future value by going into the custom T-shirt business in which they suffer from diseconomies of scale as well as compete for the lowest margin orders. Also, I believe that they should prioritize Salt Life marketing and ecommerce rather than open new stores. They should’ve also avoided venturing into Salt Life branded restaurants and beer. The balance sheet view suggests Delta is more likely to be a distressed retailer than a growing lifestyle company, based on:

The market appears to be giving the Salt Life brand a huge premium due to its former popularity and a favorable analyst rating. However, the brand’s growth is slowing, and managements attempts to expand into new segments seems likely to fail. The balance sheet is worrisome, and the valuation seems unjustifiable.

Robert Humphries is the current CEO and Chairman of the Board. He has held that role since 2009. Deborah Merrill is the current CFO and has held that role since 2006. Both have been with the company since 1998. Management seems to be looked at in a positive light based off the stock price surging since their tenure started. However, most of that is due to an improved economy. I think management is rather complacent in investing in technology and has continuously paid too much for acquisitions. Over the past ten fiscal years revenue has barely increased, at a CAGR of 0.17%. Net income has decreased by a CAGR 3.84%

The big take away is that DLA has neither a competitive advantage nor operational efficiency advantage on any of its business segments. It only offers a differentiated product through its Salt Life clothing, but management doesn’t appear to optimize its growth. Most of its sales are through wholesale which have low profit margins. In my opinion, management would’ve been better off investing in marketing and direct to consumer e-commerce due to its higher margins. Other than Salt Life, the other 90% of their sales come from generic clothing. They claim to have a few lifestyle brands in the Delta Group, but none seem to be popular enough to attract a lifestyle brand sales premium.

Inventories as a percentage of sales has been increasing. On top of that management just issued a statement on January 13 which revised down their sales for fourth quarter 2019 to $95 million compared to $101.7 million the prior year. I believe there’s a short term risk that Q4 2019 is a negative surprise, and that the analyst at Roth Capital who has a Buy rating will downgrade.

Management has been unable to reduce working capital as a percentage of sales over their tenure. However, the biggest risk appears to be the lack of cash compared to the amount of debt. Currently they have 600 thousand dollars in cash. Management has stated that they plan to use credit lines for working capital and operating cash flows to pay interest. However operating cash flow is decreasing, and it begs the question, if we hit a recession will the lack of cash, cash flow, and available credit force it into bankruptcy. Free cash flow has had the biggest noticeable decrease since Robert Humphries start as CEO.

I believe that the analyst at Roth Capital is a large influence in the stock price. A downgrade in the following year is likely due to

Given that revenue is decreasing, working capital is increasing, and free cashflow has fallen by 87% over the past 10 years it is hard to value DLA with a free cash flow approach without an extremely low number. So instead I looked at what other companies of similar quality are valued at on a relative basis. Hanesbrands (NYSE:HBI) operates similarly to Delta Group and both wholesale to customer T-shirt companies. On the lifestyle brand I think American Eagle (NYSE:AEO) is close to what Salt Life aims to be. There is also a chance that Delta gets into financial trouble during a rough economic environment which isn’t included in the valuation. Overall I think 10x 2022 EPS is a fair multiple, driving a fair value below $16/sh. 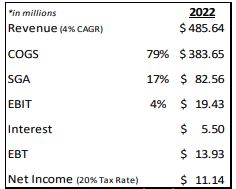 © Reuters. WASHINGTON (Reuters) – The U.S. State Department has approved the potential sale of drones to Qatar in a deal valued at $1 billion, the Pentagon said on Tuesday. The principal contractors will be […]