Shopify (SHOP) has been an excellent investment in the growing and exciting e-commerce sector, snowballing returns with no ending on sight. Since its IPO on NYSE, the stock has returned more than 1700% to its shareholders. The company has benefited from the e-commerce revolution and omnichannel commerce. It has also been a major player around the astronomical growth in the relatively new drop-shipping trend.

Shopify is a cloud-based SaaS (software as a service) shopping cart solution. The company offers startups as well as small and big businesses a free platform to launch their store, as well as build their online presence through multiple tools and cloud infrastructure.

Nowadays, businesses need to have a strong footprint in online shopping, and Shopify has been a catalyst for the success of many, providing access to numerous tools like Shopify Capital, Shopify Pay, and Shopify Shipping. They also get access to the large Shopify App Store. While the company has been truly amazing, revolutionizing online shopping and positively impacting in their sector, over the past year, the stock’s valuation has been increasing beyond reasoning.

Shopify’s growth has been spectacular over the past five years; however, as with all businesses, the growth eventually slows down. The company had been growing revenues north of 100% YoY nearly four years ago. Since then, while the growth remains impressive, it has slowed down to a little under 50% YoY, as it continues its downward trajectory. While deceleration on the rate of revenue growth has constantly been increasing, few businesses can still expand sales at such a jaw-dropping rate. Shopify has positioned itself excellently to take advantage of the e-commerce era, as management skillfully rides the wave of online shopping growth.

However, no matter how impressive a company’s growth is, how deep its moat is, or how skillful the management is to keep on delivering, there is a point at which a stock can get too expensive. Shopify’s stock has been beyond this point for a long time now. As a result, I don’t see how its current valuation can reflect future earnings at any point in time.

As you can see below, the stock had been historically trading between 10 and 20 times its sales, which, even though pricy, is relatively common amongst hyper-growth technology firms. However, since the beginning of the year, the stock has been parabolically moving higher with no end on sight, despite no change when it comes to its revenue deceleration. As of writing this article, the stock is trading at more than 38 times its current sales. 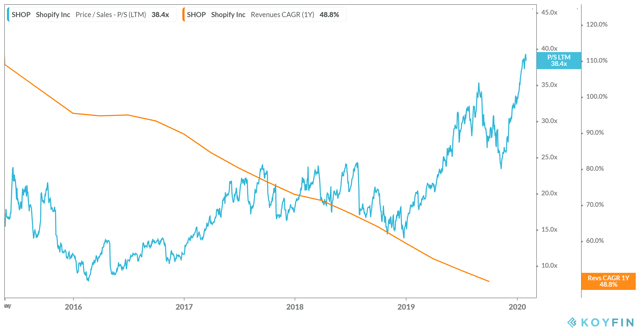 Moreover, for Shopify to fuel its rapid growth, the company has been continually burning cash, and as a result, has never posted a net income. Losses notably spiked during the last quarter, in which Shopify posted a net loss of $72.8 million, or -$0.64 per share, though that includes a one-time tax provision of $48.3 million. 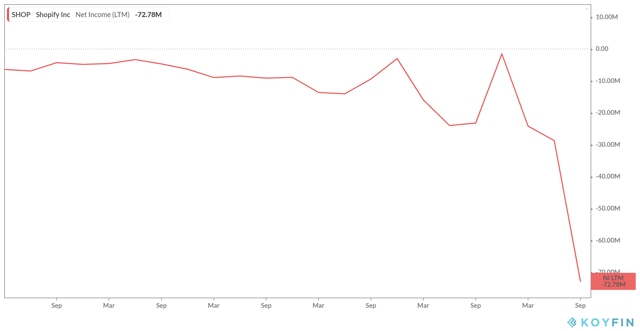 While I am a fan of the burning-cash-for-growth model that Amazon (AMZN) made mainstream, Shopify relies heavily on continuously raising more equity in exchange for cash, continuously diluting its shareholders.

The good news is that investors are happy for the company to raise more equity since management has historically been able to transform the extra cash into further growth. Also, Shopify benefits from raising equity at such high multiples, taking advantage of its extraordinarily high stock price. That has allowed the company to build a reasonably large cash position. As of the last earnings report, Shopify had $2.67 billion in cash, cash equivalents, and marketable securities, after raising more cash in the previous quarters. 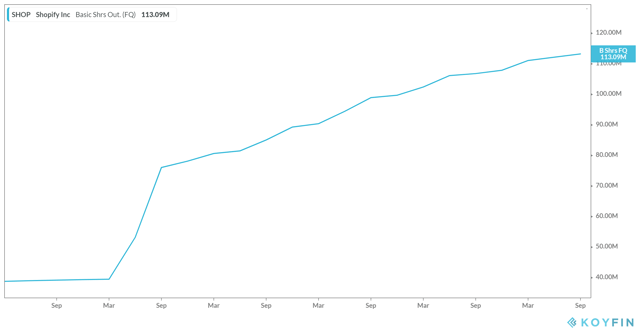 The question, however, remains. Is Shopify’s P/S of 38.4 sustainable? The answer is probably not. For context, the graph below includes various hyper-growth stocks in the technology sector. I make no comparison on their business model, but instead, want to emphasize on how insane Shopify’s multiple is. Even TradeDesk (TTD) and Okta (OKTA), which have both seen spectacular turnover growth, don’t trade anywhere near Shopify’s current P/S. In fact, using Finviz’s stock screener, one can confirm that Shopify is the most expensive stock in the whole market, for equities with a market cap above $50B, in terms of P/S. 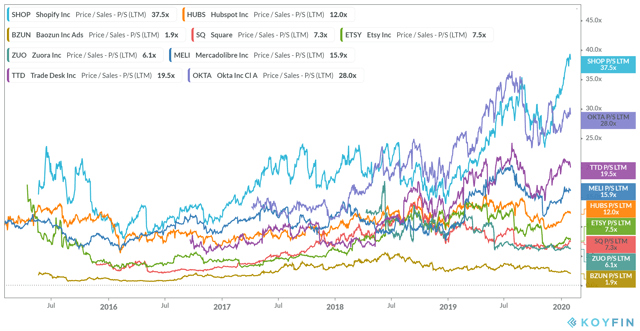 Moreover, the reason I don’t see Shopify’s valuation as sustainable, is that it never seems to be approaching a tangible level in terms of earnings, at any point in the future. The graph below illustrates the consensus of analysts’ estimates in terms of the company’s EPS for FY2020 and FY2021.

Even if Shopify achieves the higher range estimate of EPS of $1.8 in FY2021, the stock is trading at FY2021 P/E ratio of 258, today. In my view, such valuation is beyond rationality and is not sustainable in the long term. 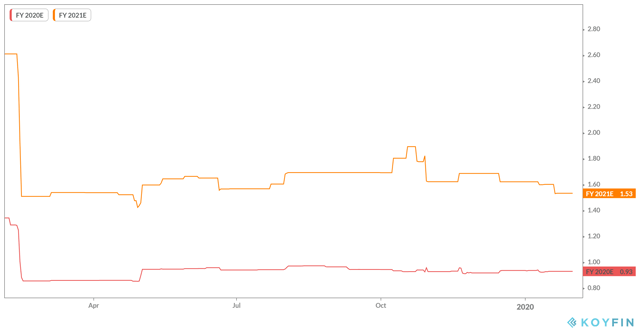 When a stock does not trade on fundamentals, it usually trades in terms of sales growth. Shopify’s valuation seems to have gone beyond that level. In the most optimistic and favorable scenario that one can imagine, the stock remains priced beyond perfection.

Moreover, if anything was to turn out not as optimistic, there is no doubt that the stock would suffer significant losses, as not earnings will ever support such multiples. Therefore, there is simply no margin of safety for investors to buy here, nor is there any case to be made to justify the stock’s valuation.

However, based on the stock’s past performance, there is simply no way to predict whether Shopify’s bubble will continue getting bigger, or whether it will eventually come down to a more rational level. Even when the stock faced a correction during last year, the market quickly took advantage of the drop, launching the stock even higher. Therefore, I don’t think trying to predict the future of the stock is sensible, simply because the stock itself is not.

Shopify has been a significant catalyst in the success and growth of many businesses, making it a truly special company. Its services have given profound tools and scalability for millions of merchants to take their business to the next level.

However, when it comes to investing, I strictly believe that no matter how fast a company is growing, there has to be some point at which future earnings justify its current valuation. In the case of Shopify, I find it hard to see how any future profitability can support its current multiples. With that being said and considering the stock’s past performance, to advise on selling the stock would be irresponsible, since any movement in the price occurs beyond any predictable measurement. I will personally stay away from the stock at the moment, and will happily be a buyer, should the stock ever come down to earth.

Disclosure: I am/we are long AMZN. I wrote this article myself, and it expresses my own opinions. I am not receiving compensation for it (other than from Seeking Alpha). I have no business relationship with any company whose stock is mentioned in this article.