Ever since the beginning of 2019, I’ve become quite skeptical of Salesforce.com’s (CRM) fundamental story. The original cloud company, long the dominant player in the customer relationship management (NYSE:CRM) software market, has seen growth rates in its flagship product fall dramatically from its heyday, so it has turned to Oracle’s (ORCL) playbook of acquiring smaller companies for growth.

Fresh off its landmark $6.5 billion purchase of MuleSoft at a valuation multiple in the high-teens, Salesforce splurged an additional $15.7 billion to buy Tableau (DATA) in 2019, marking its entry into the BI space. And throughout the year, Salesforce’s M&A team has remained incredibly busy, picking up bolt-in acquisitions here and there.

My last article on Salesforce deals with the company’s spending spree and how it’s masking lower organic growth rates via M&A. In a nutshell, I believe that Salesforce’s current ~30% revenue growth rates (helped by the inclusion of Tableau’s revenue stream) is currently pumping up Salesforce’s valuation. When Salesforce enters a more normalized FY21 (the year that begins in February 2020), where guided growth rates fall to 22-23% y/y (barring the very likely scenario that Salesforce buys another large company, of course), its valuation multiples will take a hit.

In this article, however, I’ll explore something that is of far more interest to bearish investors: Salesforce’s seeming inability to ever produce meaningful GAAP profits. In my view, the market has taken an extremely defensive pivot over the past couple of months, sparked by the failure of the WeWork (WE) IPO and the subsequent fallout that led to mass layoffs across the tech sector in a re-invigorated push for profitability.

Salesforce has long been a poster company for “growth at all costs,” having ballooned to a ~$20 billion annual revenue scale without generating meaningful profits. The recent shift in market sentiment toward these kinds of companies, in addition to declining organic growth and over-reliance on M&A, will work against Salesforce’s favor in 2020.

Salesforce’s declining margins are symptomatic of an empire-building mentality

The hallmark promise of a cloud software company is that it will spend gobs of cash on sales and marketing to attract long-term clients in its early days; but as it grows larger, its expense ratio as a percentage of total revenues will decline and the company’s stream of subscription revenues will eventually push it to profitability.

Salesforce is, hands down, the largest pure-play cloud software company. Yet despite its ~$20 billion scale, it has continually deferred its promise of profits into the future. To frame the argument around Salesforce’s declining profits, we need only look at the chart below.

In Q3, Salesforce’s GAAP operating margin sunk by 126bps y/y to just 1.4%. This is also one-third of the margin that Salesforce was capable of generating in 3Q18.

Yet there exists a quandary here: even as GAAP profits decline, Salesforce has tended to show stable pro forma margin metrics. The factor bridging the difference is Salesforce’s growth in stock-based compensation.

Now, stock comp is a common element of pay across the tech sector. But Salesforce, in particular, has been tremendously generous in handing out stock-based comp. Its growth in stock comp expenses mirrors that of a mid-cap company much smaller than itself.

In Salesforce’s most recent quarter, the company grew stock-based comp by 55% y/y; year-to-date in FY20, stock comp has risen 34% y/y (much faster, by the way, than year-to-date revenue growth of 27% y/y). In effect, unsuspecting Salesforce investors are being subjected to tremendous dilution in their shares, year after year.

Equally frightening to note is how quickly Salesforce has grown its headcount, primarily from its acquired companies (Salesforce has the reputation of a rather benevolent acquirer; it doesn’t immediately raze the staffs of its targets post-acquisition). In Q3 alone, thanks to the additional Tableau headcount, Salesforce’s headcount grew 39% y/y, again much faster than the corresponding Q3 revenue growth rate of 33% y/y: 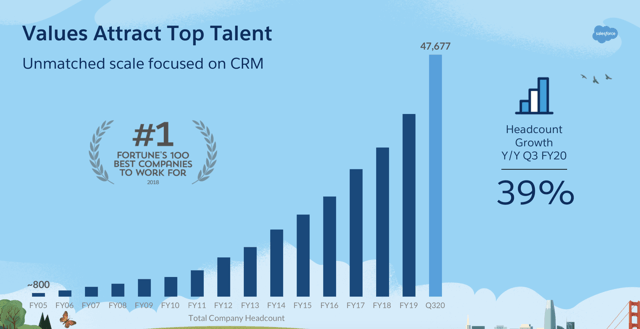 Yet Salesforce appears to be masking the true cost of this headcount expansion by paying generously in stock, and not in cash. By focusing solely on Salesforce’s pro forma margin metrics, we ignore the fact that investors are essentially subsidizing Salesforce’s empire-building through dilution.

Can Salesforce’s valuation hold up?

Is it worth paying nearly a double-digit valuation multiple for a company whose organic growth, as implied by FY21’s guidance of 22-23% y/y growth, has fallen to the low 20s?

Fewer investors look at Salesforce’s P/E ratio, but the takeaway is the same. A >60x forward P/E implies that Salesforce bears the promise of strong future profit growth, but as we’ve just discussed, this is far from the truth. Even Salesforce’s pro forma EPS, which is helped by the exclusion of stock-based comp, has seen only meager 14% growth in the year-to-date, while the GAAP earnings picture is noticeably far worse.

Salesforce’s aggressive M&A playbook and its continual lack of meaningful profit growth might be excusable in a more bullish market environment, but as it currently stands, most investors have become incredibly cagey about loss-leaders like Salesforce.

A two-turn reversion of Salesforce’s current revenue-based valuation, back to a historical ~7x multiple, would imply a disastrous ~$40 billion wipeout in Salesforce’s market cap and a 25% drop from current levels, down to ~$137 (my one-year price target on the stock).

The stock’s tremendous gains since 2019 are heavily at risk, and investors should heavily consider pivoting to other positions.