Saipem S.p.A. (OTCPK:SAPMY) offers engineering, drilling, and construction of major projects in the energy and infrastructure sectors. The company’s backlog has increased in leaps and bounds after bagging a few significant LNG projects, including the Arctic 2 project. The LNG-related activities will be the key to keeping it going in the medium-term, although the low natural gas price will keep growth potential muted for now. With relatively low debt repayment obligation, I think the stock is likely to offer robust returns in the medium-to-long-term.

In 2019 so far, increased offshore drilling in the Middle East, Far East, Sub-Saharan were the key growth drivers. Despite the steady crude oil price, many offshore projects continue to linger. Slow recovery and depressed pricing in the offshore drilling will not allow margin to expand anytime soon. Although its relative valuation multiples are beginning to look cheap, I do not think the stock can produce attractive returns in the short-term. 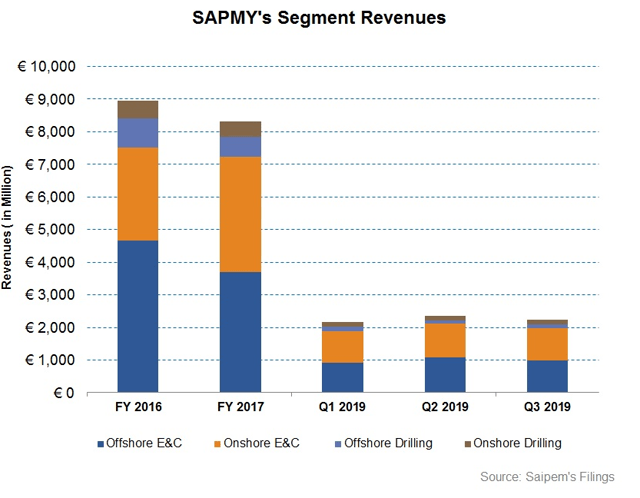 Let us discuss a couple of the most significant offshore projects for Saipem in recent times. In August, it announced participation in a joint venture in the Arctic LNG2 project in Russia, which includes the construction of three LNG trains, with a capacity of 6.6 mtpa (million tons per annum) of LNG each. For Saipem, the award is worth €2.2 billion, which includes designing, commissioning, and startup of 3 LNG trains. The second noteworthy project for this category would be the Nigeria LNG, for which the company has signed a letter of intent. However, the project is still not counted in the company’s backlog. 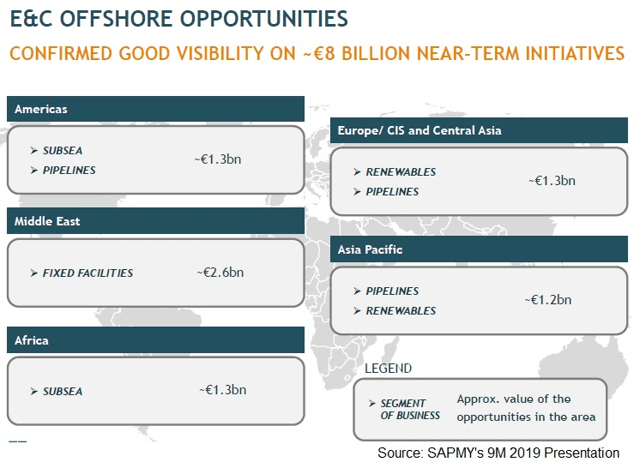 While the above projects in the pipeline are expected to drive the company’s top-line forward, the company’s on-going E&C offshore projects were relatively weak in Q3 compared to a quarter ago. Saipem 12000, the company’s primary offshore project, saw steady utilization in Q3 following the upgrade works as it started the operation in Mozambique for the Eni-Rovuma drilling campaign. Scarabeo 9, the semi-submersible drilling rig, will move to offshore Romania after it underwent preparation works. So, it did not contribute much to the top line in Q3. Scarabeo 7 and Scarabeo 5 are either being marketed or will soon be used for support activities for Eni (E). The company is looking to finalize contracts with the client. So, these vessels will be actively working when the market recovers.

Because full recovery in the offshore segment has not materialized yet after the 2014-16 crude oil price crash, we see large SURF (subsea umbilicals, risers, and flowlines) contracts are phasing out, while the large awards have been postponed awaiting further rebound in the crude oil price. In Q3 2019, E&C Offshore revenues decreased by 7% compared to Q2 2019. The segment adjusted EBITDA margin also deflated to 16% compared to 17% a quarter ago. The legacy contracts are slowly being phased out. The fall in margin reflects new contract rates being lower than the contracts received before the downturn started. A slow recovery in the subsea segment can reduce its share in the company’s mix, going forward. 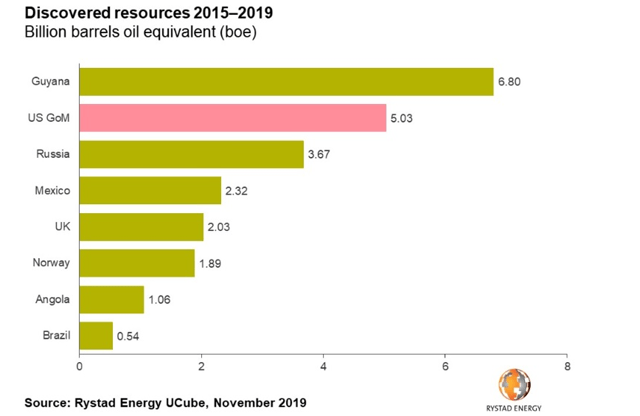 According to EIA’s report, the average annual crude oil production in the Gulf of Mexico (or GOM) will increase from 1.8 million barrels per day in 2018 to 1.9 million barrels per day in 2019 and 2.0 million b/d in 2020. However, the investors should note that onshore production growth has outpaced offshore production growth in nearly the past decade. EIA also estimates that eight new offshore projects will come online in 2019 and four more in 2020. Although the EIA’s forecast started to exhume confidence in the outlook, I think the current demand concern and adverse developments can keep prices depressed for longer-than-expected, which can hurt energy production and services.

As of September 30, 2019, the company owned 82 onshore rigs, which has remained steady in 2019 so far. Saudi Arabia and Venezuela account for the majority of the company’s rigs. The rig count in Latin America reflects resilience in Latin America’s energy activity. The Middle East saw more rigs being added in December compared to the beginning of the year. So, the company’s strategy to focus on these two regions paid off in 2019.

Onshore drilling utilization was 68% in 9M 2019 – unchanged compared to a year earlier. In Latin America, Bolivia and Colombia provided a tailwind to the company’s performance, while policy uncertainty in Argentina pegged it back. In the E&C Onshore segment, revenues declined by 6% in Q3 2019 versus a quarter ago, while the adjusted EBITDA margin remained stable at 6%. Read more on the company’s contracts here.

Earlier, Saipem initiated a three-year strategic plan, which included additional cost cuts, improved efficiency, a new organizational model, and the creation of a new entity for value-added engineering activities. So, the company’s margin has benefited from cost-cutting efforts. It continues to face hurdles from high carry contracts completions in the offshore business and the activity slowdown in the onshore business due to country-specific situations. Overall, the company’s volumes and revenues have increased in 9M 2019, while the margins have been healthy.

The Offshore Drilling was the best-performing segment by top-line in Q3 2019. Revenues increased by 4% in Q3 compared to Q2, although the adjusted EBITDA margin contracted. Higher volumes in the Middle East, Far East, Sub-Saharan were the key growth drivers in Q3. Revenues in the Onshore Drilling segment, too, were resilient (2% down sequentially) in Q3. 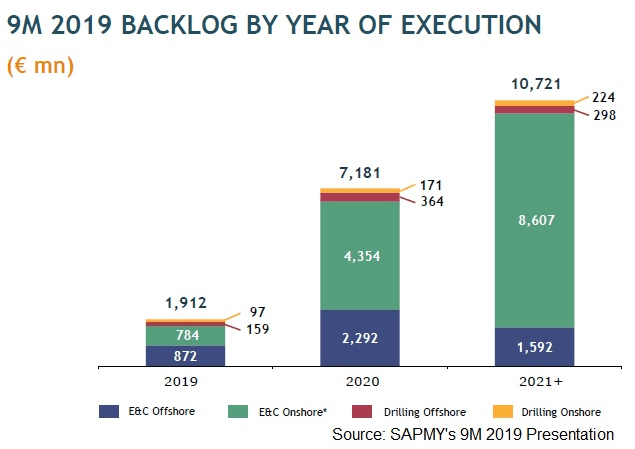 Backed by a sizable contract in Saudi Arabia in the Berri and Marjan fields and other awards in E&C offshore and drilling, SAPMY’s total backlog increased by 57% compared to 2018-end. I have already discussed some of the key offshore and onshore projects above in the article. As a result of these projects, the company increased its commitments to around EUR 19 billion (excluding the non-consolidated Arctic LNG 2 backlog), which translates into a book-to-bill ratio of 1.9x. In FY2019, the share of non-oil projects in the backlog has increased as more LNG awards were added to the E&C onshore segment. The company expects an increasingly higher proportion of revenues coming from the E&C Onshore segment in FY2020 and FY2021, which indicates it is strategically leaning on the LNG projects in the medium-term. 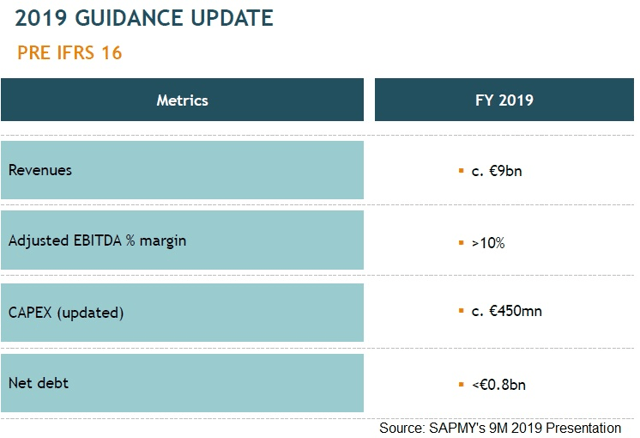 SAPMY’s current guidance for revenues and adjusted EBITDA margin remains unchanged in FY2019 versus the previous guidance, as I discussed in my last article here. However, it updated the capex and net debt forecast. The management now considers capex for the year to be 10% lower than the previous guidance, while it also expects net debt to decline by 20%. Lower capex can increase free cash flows, while lower net debt indicates a more robust balance sheet.

In 9M 2019, Saipem’s cash flow from operations (or CFO) declined by 35% compared to the prior year following the reduction in revenues. Free cash flow fell even more sharply during this period due to higher capex in 9M 2019 compared to a year ago.

In FY2020, the company would be required to repay €178 million of debt. Read more on the company’s debt structure here. SAPMY’s debt-to-equity ratio is 0.23x. Although its free cash flow decreased, the company has sufficient liquidity to meet its short-term contractual obligations. However, it should be more cautious about free cash flow generation in meeting its financial obligations in the medium-to-long term.

SAPMY’s forward EV-to-EBITDA multiple is expected to deflate versus its adjusted trailing 12-month EV/EBITDA. In comparison, the peers’ forward multiple compression is marginally steeper because the sell-side analysts expect the company’s EBITDA to improve less sharply compared to peers in the next four quarters. This would typically result in a lower EV/EBITDA multiple compared to the peers. The stock’s EV/EBITDA multiple is significantly lower than its peers’ (WDGJF, FTI, and SBFFY) average of 8.7x. I think the trading multiples are beginning to look undervalued at this level. I have used estimates provided by Seeking Alpha in this analysis.

What’s The Take On SAPMY?

According to a news report by Bloomberg, Saipem is considering a combination with Subsea 7 SA (OTCPK:SUBCY). Although the management has not commented on anything about the potential deal so far, the stock market has not reacted much to the news. SUBCY provides subsea field development products and services to energy companies around the world.

A couple of notable changes took place for Saipem in the past six months. One, the management seems to have overestimated the offshore business potential, at least in the short-term, in the previous update. Despite the steady crude oil price, many offshore projects continue to linger. Although tendering activity remains buoyant, execution has been typically long-winding. On the other hand, the company’s backlog has increased in leaps and bounds after bagging a few significant LNG projects, including the Arctic 2 project. In 2019 so far, increased offshore drilling in the Middle East, Far East, Sub-Saharan were the key growth drivers. With an eye on the recovery of the offshore projects in the long-run, the LNG-related activities will be the key to keeping it going in the medium-term. I think the stock is likely to offer robust returns in the medium-to-long-term.

However, Saipem may not be able to improve the operating margin significantly in the short-term because the offshore drilling contracts are re-negotiated at unfavorable rates. The company has an extended run to improve free cash flows to manage the high debt load in the medium-to-long-term.

We hope you have enjoyed this Free article from the Daily Drilling Report Marketplace service. If you have been thinking about subscribing after reading past articles, it may be time for you to act. The oilfield has been at a low ebb, but has recently gained steam. 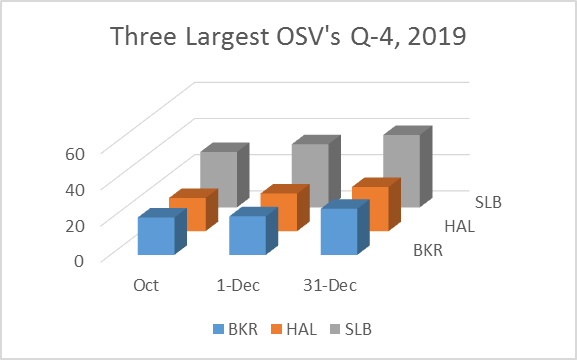 We have been recommending these companies since late summer. Locking in a gain of about 20% in a single month, and we think there’s more to come in 2020. Give it some thought, and act soon if you are interested. A 2-week free trial is applicable, so you risk nothing.