SailPoint Technologies Holdings, Inc. (SAIL) is the leader in Identity Governance, a technology that determines and monitors who has access and how the access is being used. SailPoint may be the leader but there is plenty of competition, including some of the big names such as International Business Machines (IBM), Oracle (ORCL), and Broadcom (AVGO) subsidiary CA Technologies that have tempered SailPoint’s revenue growth.

In my previous article on SailPoint, I stated that: “I am not convinced that the company has enough SaaS experience at the executive management level to make it a success.” Indeed, SailPoint has now brought in a new CRO, Matt Mills, a person with experience in SaaS and leading sales teams with the objective of growth and scale. It has been my observation that it takes 6 to 12 months for new management to turn around sales execution. So investors shouldn’t expect too much for the rest of 2020.

In addition, it was noted during the 2019 Q3 earnings call that some revenue had been pulled in from Q4, meaning that Q4 revenue may be slightly depressed, although it isn’t clear how much revenue we are talking about.

And then, Jason, you also noted, it seems like you pulled some Q4 deals into Q3. I’m wondering if you can help quantify that. Q4, obviously, you raised the full year, which is great. Q4 revenue guidance was maybe a tad light of Street consensus, but maybe some of that is some of the Q4 deals that pulled in to Q3?

Yes. I mean, that’s — I think you’ve hit it on the head there, Matt. Obviously, with a number of large enterprise deals, some of those deals can move between quarters. And we did have some strong momentum. It was definitely not more than what you noted relative to Q4, but a little bit of pull-in from Q4 to Q3.

Apart from the slowing revenue growth, new CRO and revenue being pulled forward, the company is in good shape. The company has a strong and consistent free cash flow margin of 13% and the stock price is fairly valued.

While SailPoint is going through the motions to convert to a SaaS business model, it doesn’t really appear to be a priority. As stated in the Q3 2019 earnings call:

I would like to see higher revenue growth and faster conversion to SaaS. That will likely not happen in the next few months at least. For this reason, I am giving SailPoint a neutral rating.

In September, SailPoint issued $400 Million of Convertible Senior Notes due 2024. This is an action that has left me scratching my head as I don’t see a need for this unless they plan on an M&A spree. An explanation for issuing the notes was given by management in the Q3 2019 earnings call:

we did the offering to take advantage of an opportunity to strengthen our balance sheet at an incredibly attractive terms.

If raising a company’s debt level to 82% of equity is strengthening the balance sheet then so be it. But let’s keep in mind that the expense of issuing the $400 Million notes including the hedge was on the order of $46 Million.

Now, SailPoint has in excess of $400 Million in cash on the books, at a cost of $46 Million, but I guess that was a good deal. In all fairness, SailPoint has made a couple of small acquisitions including Orkus and Overwatch.ID that may contribute to the product, but I have to wonder what the game plan is. 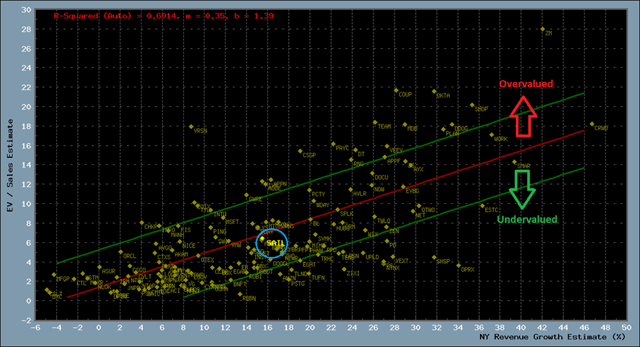 A best-fit line is drawn in red on the scatter plot and represents a typical valuation based on next year’s sales growth. As can be seen from the chart, SailPoint is fairly valued relative to its peers based on its forward sales multiple.

SailPoint is a leader in Identity Governance but revenue growth is noticeably slowing presumably due to competition and “sales execution issues.” The company has brought in a new CRO who is experienced with the SaaS business model and has the capability to grow and scale the company. That being said, I expect it will take 6 too 12 months before any performance increase is realized.

In addition, some revenue has been pulled in from Q4 to Q3, which may result in lower revenue in the coming quarter.

SailPoint does not appear to be urgently pressing for the SaaS business model. Subscription revenue is about 50% of all revenue, and of that most is maintenance revenue. Perhaps the new CRO will have an impact in this area.

The company appears to be reasonably strong with 13% free cash flow margin and close to 20% revenue growth. I also believe that the company is fairly valued based on its forward sales multiple. But the slowing growth, new CRO and revenue pulled forward are enough for me to give this company a neutral rating.

DOW JONES OUTLOOK: Dow Jones jumps as concerns over COVID-19 omicron variant begin to fade on news that the new strain may not be as severe as other versions of the virus Falling pandemic angst […]