Even before the pandemic, Ryman Hospitality Properties (RHP), as one of the REITs operating in the luxury market, had some unique qualities that made it possible to have visibility into future revenues.

Also, while high-end hotels tend to be more recession-prone, destination hotels with an experiential component tend to have a regular clientele, even in these difficult times.

In this respect, the company specializes in destination hotels and is the owner of several Gaylord Hotels branded properties operated by Marriott (MAR).

I make an investment case for Ryman by tapping into my previous experience covering a number of hotel REITs as well as a hotel operator.

Hence, I will use some key ratios like occupancy and cash burn as well as use industry benchmarks to support my statements.

Since reopening, cumulative occupancy at the four Gaylord properties (out of a total of five) has seen three straight months of improvement, reaching around 19% for the month of August.

Now, one of the advantages of operating in the luxury market for the likes of Ryman is that the occupancy ratio required to lower cash burn or break even is less than for economy hotels. Hence, with 19% occupancy, RHP is gradually moving to the 46% break-even level for the room-only hotel industry average.

Still, this movement should get some additional traction considering that there have been reports of strong demand at pools, lounges, and restaurants from leisure transient customers since reopening.

This means that the company is deriving more revenue from other hotel amenities than just rooms.

Thus, this time considering the industry’s total hotel break-even occupancy of 34%, RHP’s current 19% occupancy ratio suggests that it is even nearer to break-even.

Exploring further, the management wants to position Gaylord Hotels as a drive‐market leisure destination leveraging on the REIT’s properties “favorable proximity as a leisure getaway.”

In this context, with more than 100 million people living within 300 miles of the four currently open Gaylord Hotels, there are opportunities to tap in the more regional markets constituted as a result of travelers’ reluctance to fly longer distances aboard planes.

Since the current level of occupancy is not profitable, I further check whether the current financial position is sustainable.

According to an investor’s presentation in early September, estimated monthly cash burn has declined to about $25 million for the third quarter from $31.7 million in Q2-2020. Cash burn is projected to be in the $22-24 million range for Q4-2020 per month on average.

This reduction in cash burn has been made possible through a gradual reopening of hotel and entertainment assets together with cost containment efforts.

In addition, the company is incurring capital expenses of $47 million for renovation at the Gaylord National. It is taking advantage of this period of closure to make progress on this project for 1,000 rooms covering one half of the hotel by the end of this year.

Additionally, it is incurring capital expenditures of $45 million on Gaylord Palms expansion to position the hotel for the eventual recovery.

Last but equally important, second-quarter net income was also negatively impacted by exceptional items including a $15 million write-off pertaining to a cancelled acquisition and a $19 million impairment charge.

As for liquidity, as of August 31, total available amount was approximately of $729 million including $675 million in the revolver. This is down from $757 million as of June 30th and further down from the $910 million available at the end of the first quarter.

At this rate, the company has approximately 30 months of liquidity based on current estimates.

To make more sense out of these figures, especially the revenue part, I make a comparison with peers and competitors.

First, for Ryman, association with the likes of Marriott is an important positive when it comes to winning guests’ trust in terms of health and safety. Hence, as part of Marriott’s operational guidelines, more hand sanitizing stations have been placed near the entrances, front desks, elevator banks and meeting spaces.

In addition, new practices for in-room dining and new approaches to buffets have been designed.

Thus, some properties including Ole Red continue to see steady improvement and are performing well under local social distancing restrictions.

Consequently, one area which is only specific to Ryman is that it has suffered relatively less in terms of revenue shortfalls for the second quarter on the basis of a comparison with Q2-2019.

The reason for this relative over-performance is RHP’s strategy from the beginning of this pandemic to emphasize on re-bookings which is better than outright cancellations as it does provide visibility into future revenues. According to the executives, these re-bookings have gained momentum over the course of the second and third quarters.

Also, where appropriate and warranted, the company has been able to collect attrition and cancellation fees, which have also contributed to the improved monthly burn rate and helped in reducing the revenue shortcomings.

This is hard to explain given that there is a pandemic.

The reason is that due to the very nature of its assets (luxury and meetings) and experiences provided to guests, RHP has thus been able to create a key differentiation factor resulting in a high degree of customer loyalty. This has in turn resulted in longer booking windows and greater visibility into future occupancy compared to peers.

On the other hand, the company has a very high debt level compared to peers. With a Debt to Equity ratio of 500, it is five times more indebted than Summit Hotel Properties, Inc. (NYSE:INN).

Still, debt/asset ratio which shows the proportion of a company’s assets which are financed through debt is 0.85.

While this is a high figure and needs to be highlighted, the fact remains that the company still has a positive worth and there are some strong growth drivers.

Also, most of the liabilities consist of long-term debt starting to mature only as from 2023. 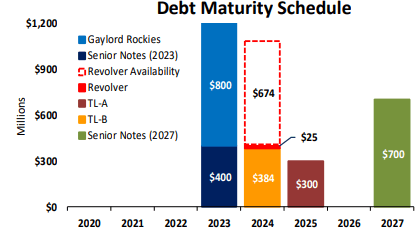 While other lodging properties have to provide significant discounts to customers in desperate attempts to increase occupancy levels, this was not the case with Ryman which, according to the executives, saw “a 17% increase in average daily rate booked during the month of July for future periods.”

Thus, there was an increase in Revenue per Room (RevPAR) but higher compared to the period when the worst of the pandemic really started to unfold but basically flat compared to last year’s second quarter of 2019.

With the company being strongly positioned to witness a faster recovery, I now consider the challenges considering second and third waves concerns. This is important given the bet the management has made in undertaking renovation and expansion work amid a period of economic uncertainty.

One of the experiential components of Ryman has been its large meeting spaces designed for large groups of people.

Now, one of the distinctive features of the COVID-19 pandemic has been teleconferencing and avoidance to meeting physically.

Thus, Ryman, with its large meeting rooms, has been impacted.

Here, the company is working with the meeting planning community and focusing attention on small groups instead of large ones in the near term. The reason is that small groups are more likely to travel and use the meeting rooms while at the same time being able to respect social distancing measures.

In this context, the company is placing a lot of expectations in its hotels with 200K to 400K square feet of meeting space located far from pandemic-hit urban locations with high population concentrations.

Thus, the location of Gaylord properties is a major differentiator compared with competitors.

Another differentiator is the hospitality REIT’s entertainment business.

Here, Ryman has reopened three venues including Nashville, Gatlinburg and Ole Red in the second quarter. All three venues have been performing reasonably well despite social distancing rules and other measures.

However, the true bright spot has been in the digital part of this business. In this case, by taking advantage of people spending more time at home, the company is delivering more of its entertainment content digitally.

Therefore, Ryman has a diversified revenue stream with entertainment and the fact that the latter constituted 28% of total revenues in the second quarter of 2020 compared to only 12.5% in Q2-2019 is an indication that the company is managing to take advantage of COVID-led adoption of digital media.

For a company which has managed to reduce revenue shortfalls to a higher degree compared to Host Hotels & Resorts, Inc. (NYSE:HST) which also operates in the luxury segment, Ryman’s stock is currently undervalued.

Moreover, the market is ignoring the company’s diverse revenue stream and its ability to take advantage of a secular digital transformation trend.

However, the company has a very high debt level compared to peers.

It is not that I am debt-allergic.

I am just trying to be realistic in view of some of the capex spends having been made in the hope of a vaccine being available in the fourth quarter or effective therapeutics or relying on hopes of pandemic control to be at manageable levels.

Hence, it is better to wait for the Q3-2020 results for confirmations of firstly, the cash-burn to be on the decrease; secondly, the re-booking figures being sustained; and thirdly, the digital entertainment revenues being increased.

If these are confirmed, then Ryman may be one of the fastest hospitality recovery stories in the U.S.

In addition, Nashville’s move to advance to Phase 3 of its COVID-19 reopening plan will allow events of up to 500 people with the city’s health department’s approval while respecting the mask mandate and other social distancing guidelines.

This plan will allow Ryman to hold performances at the Grand Ole Opry House on Saturday, Oct. 3, marking the first time it will have a live audience since March.

This opening together with subsequent performances should be highly successful as after confinement measures, people are in desperate need for social interaction.

There may be some upside in the stock constituting an opportunity for traders.

On the other hand for investors, following confirmation of the positive trends during the forthcoming Q3-2020 earnings call and based on current undervaluation compared to peers, my price target for Ryman is $40-42 for the short term.

Additional disclosure: This is an investment thesis and is intended for informational purposes. Investors are kindly requested to do additional research before investing.
I am long INN.