Rio2 (OTCQX:RIOFF) is a development-stage company advancing the 5 million ounce Fenix gold project in Chile. Led by the same management team that built their previous company, Rio Alto Mining, into a multi-asset gold producer in South America before selling out to Tahoe Resources (NYSE:TAHO) in a $1.2 billion deal five years ago, Rio2 appears to be on a similar path.

After a period of being almost entirely forgotten by the market, despite the price of gold starting to wake up in the summer of last year, Rio2’s share price has finally bounced back in 2020. It has outpaced many peers and the overall sector as the price played catch up to its intrinsic value. While less of a good deal than it was just four months ago, we still see value in this developer based on their latest economic study and long-term potential.

The Fenix gold project, previously known as Cerro Maricunga after it was discovered and advanced by previous operator Atacama Pacific, is a large oxide gold deposit in Chile’s northern Atacama desert region. Rio2 acquired the company through a merger in mid-2018.

Atacama Pacific had published a pre-feasibility study (PFS) in 2014 based on proven and probable reserves of 3.7 million gold ounces. The study gave a $409 million NPV and 28.6% IRR at a gold price of $1,350/oz, based on producing 228,000 ounces per year over a 13-year mine life. While this would have been a significant new mine with a large production profile for a single-asset producer, with a capital cost budgeted at $400 million, it was unrealistic for the junior explorer to ever finance on its own.

After completing the acquisition of Atacama, Rio2 decided to take a different approach at Fenix. The company focused on exploiting a smaller part of the defined resource and developing a more realistic mine plan, cutting the reserve base for their PFS by more than half and decreasing the annual output by 63%. 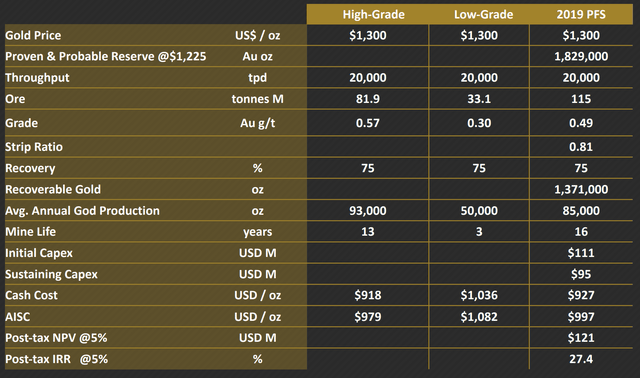 The downside of making Fenix smaller is that if the price of gold were to fall back to the $1,300/oz level, the project wouldn’t be that exciting, and many financiers or acquirers may deem it to be too small to be worthwhile. However, now that gold prices have risen to record levels, the time is now to develop Fenix, and management appears focused on putting the mine into production as soon as possible.

A key point to note is that this PFS is only based on the project’s proven and probable reserves, meaning there is clear upside for the project if gold prices stay strong and the company can add back in a portion of the project’s remaining 3.2 million ounces of measured and indicated resources into reserves.

Looking at the sensitivity analysis and choosing a higher gold price of $1,500/oz (still 21% less than today’s metal price levels of $1,900/oz), the project’s economics materially increase, with the NPV doubling to $241 million, and the IRR increasing to a healthy 44.3%. At current gold prices, the NPV approaches $500 million compared to a current market cap of only $115 million. 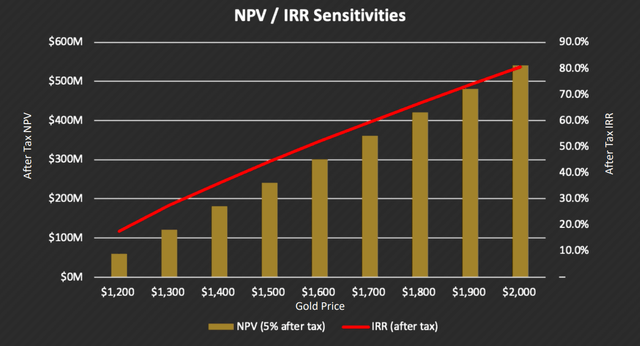 One of the main hesitations about the project has been a lack of water for operations due to Fenix’s location in one of the world’s driest areas, and the lengthy permitting process needed to tap into the local water resources that do exist. To fast track the timeline to production, the company instead plans to truck water about 140 kilometres to the Fenix mine site. This will require 75 trucks per day, adding $1.5 per tonne to their operating costs.

This logistical aspect has raised eyebrows among investors, but management believes this is the best route as it allows them to cut the mine’s development timeline from five years to only two. The company continues to evaluate trade-offs to optimize the water issue, but their current assumptions appear to be reasonable for an eventual mining scenario.

Management believes that it can bootstrap their initial startup phase with only $120 million in fundraising, which, considering Rio’s current market capitalization, should be achievable at good terms. There is a healthy appetite for financing development projects at the moment given the gold bull market, and with a proven management team, we believe they could secure a financing package in the near term as the project gets closer to receiving its environmental approvals.

Aside from the lack of water that affects many mining operations in the country, Chile is a top-tier mining jurisdiction, and arguably, the Americas’ top destination for miners. The country is the world’s largest copper producer and has a long-standing reputation for fair policies towards permitting and investment protections and has a strong pool of experienced personnel, suppliers and key infrastructure to leverage, along with lower operating costs than in North America.

Management is working on securing permits to construct the mine, submitting their Environmental Impact Assessment (EIA) to the Chilean authorities in April of this year. Approval of the EIA is expected in the second quarter of 2021.

Fair Valuation Will Get Better as Fenix Nears Production

At a market capitalization of $115 million, and taking an NPV range of the Fenix project between $240 million and $480 million with gold prices between $1,500/oz and $1,900/oz, the company is trading in the range of 0.24 to 0.48 times the value of Fenix. This compares well with similar gold developers even after a strong run in Rio2’s share price. As the company moves towards its initial gold pour in 2022, the company should move to trading in the 0.7x-0.9x range as a junior producer, roughly double from current levels.

Fenix has 5 million ounces in measured and indicated categories, assuming a gold price of $1,500/oz. With $7 million in cash and an enterprise value of $108 million, Rio2 is trading at around $20/oz of measured and indicated resources, which is cheap for what appears to be a robust advanced-stage project at current metal prices.

For additional upside, there are a further 1.4 million ounces in the inferred category that could be proven up with more drilling, although some of the deepest material in the pit shell (currently defined down to 600 metres) is unlikely to ever be mined due to the cost and constraints of developing such a large open pit to that depth.

Will They Build, or Sell?

Fenix is one of the largest development-stage heap leach gold projects globally and could attract takeover interest from a larger producer looking to add near-term production in good jurisdictions. Many miners, including Gold Fields (NYSE:GFI), operate in the region, and Fenix’s large resource base would be a welcome addition to the senior gold producers who are faced with declining reserves due to a lack of major new discoveries in recent years.

Rio2 CEO Alex Black leads a management team with a successful track record of developing and operating similar projects to Fenix in South America from their experience at Rio Alto, which built and ran the open-pit heap leach La Arena and Shahuindo gold mines in Peru from 2011 until they sold the company in 2015.

Management has skin in the game, with management owning 17% of the company and the CEO having 8% alone. Legendary mining investor Eric Sprott is also a backer with a 14% stake after investing in the company last year.

Next steps at Fenix

While we believe Rio2 could be a takeover target, we believe management will opt to build Fenix themselves and secure a better valuation down the road once they’re a producing company, as they did with Rio Alto.

As per the company’s latest news release, management has already selected several contractors for the eventual construction of Fenix and is completing detailed engineering activities by early November in advance of project financing. Management plans to start construction at Fenix next year and forecast an initial gold pour at the mine late in the second half of 2022.

Rio2 is a gold developer on a clear path to production in a strong gold market. While the upside may not be as exciting as other speculative gold plays, the company could be a good pick for investors looking for steady value creation over the next two years.

CEO Alex Black has done it before, selling Rio Alto for $1.2 billion to Tahoe Resources after building and operating two gold mines in neighbouring Peru that are similar to the Fenix project.

After acquiring the project two years ago, the company has downsized Fenix with a smaller NPV and production profile but a much more achievable development plan. This is a good move by the management team, allowing them to try to build the mine themselves instead of optimizing for size and then having to wait for a major to come around and buy them out, wasting a lot of shareholder value in the meantime.

The share price has outperformed this year to catch up with the sector after being left for dead in 2019, but the stock still provides good value at these levels. Pullbacks, including the gold sector’s recent weakness, would be good opportunities to accumulate, while the company progresses towards significant milestones in 2021 and eventual production in 2022.