All the base metals have been on the up recently.

Nonetheless, it would be naïve to put all such resilience down to a weakening U.S. dollar (supportive as that is for metals prices).

Copper and aluminum have both seen fundamentals to some extent supporting price rises.

So, too, has the much smaller tin market.

If you are a tin buyer – or if you buy copper, aluminum or any other metal – make sure you know the five golden rules of sourcing.

On the supply side, tin has taken some heavy knocks from COVID-19-related lockdowns.

The pandemic has forced Malaysia, Brazil, Peru, and Bolivia to either limit or curtail full operations, Reuters reports. All of them are vertically integrated from mine to smelter, meaning a fast transmission time to impact on the physical refined metal market.

The World Bureau of Metal Statistics (WBMS), this week, highlighted Indonesia’s exports by destination, showing a 5.2% decline to 33,321 tons for the January-June period.

Indonesia’s PT Timah is said to have slowed output and exports due to low prices earlier in the year. However, the firm retains the capacity to increase supply if prices were to become sufficiently attractive.

Prices on the rise, inventory falls

According to the Reuters post, LME-registered stocks totaled 7,125 metric tons at the start of the year.

LME warehouses have seen almost 3,500 metric tons of inflows over the same time frame, but none of the metal has stayed around for long.

Reuters reports a 1,900-ton tranche showing up in the United States in March. All of it was warranted at Los Angeles at the start of April; since then, it has headed out of the LME warehouse door again.

Only 340 tonnes remain, 165 tonnes of which are awaiting physical load-out. There were also 1,800 tons of tin in shadow storage in Singapore in February and March. That tranche didn’t hang around long either. As of the end of May, total shadow stocks were just 265 tonnes, the article states, all of it at LME locations in Asia.

Meanwhile, Shanghai Futures Exchange (SHFE) stocks have been dropping, down to 3,006 tons last week (down by 2,345 tons since the start of January).

How much of China’s 3,675 tons of refined tin imports in May was due to the arbitrage window between the LME and SHFE is hard to say. Nevertheless, it certainly played a significant part, contributing to the largest monthly import total since February 2012. 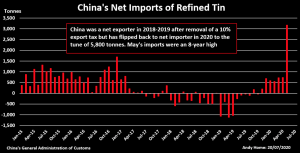 China was a net exporter last year but was no doubt hampered by reduced imports of concentrates from Myanmar.

As a result, China has imported more refined metal this year, making it a net importer.

The largest consumer is in tin solder for the semiconductor market and electronics, which have held up well during the pandemic this year.

As if to underline the state of the market, Apple (NASDAQ:AAPL) reported record $59.7 billion sales this week for the second quarter of 2020. The figure marked an 11% from last year, as consumers went on an electronics spending spree.

How much further tin has to go, though, remains to be seen.

In the medium to long term, a tight supply market, dwindling grades and a dearth of new projects coming online suggests higher prices. For the balance of this year, it is possible higher prices could attract an increase in supply from Indonesia, which may have built up some inventory this year on lower exports.

In any case, it would be a brave speculator to bet against tin – the fundamentals, at least, remain strong.