In August of 2017 I made my initial investment in Signet Jewelers (SIG) at a price of $58 per share. I then again added to my investment in March of 2019 at a price of $27 per share. It is safe to say this has been one of the worst performing investments I have ever made. With a share price of around $15 currently I’m down over 66%. Luckily, I only put a very small amount my portfolio into Signet, but I need to reevaluate my position, which this article will explore. I made my original investment on the belief that the business had sound demand for its product and was getting blasted for general retail weakness in the United States. I re-upped in 2019 with the idea that the “Path to Brilliance” plan would create a leaner, more efficient retail footprint. I am going to be holding on my position as I’d believe that the completion of the plan will result in stronger financial results thereafter.

As can be seen above Signet has seen revenues declines every year over the past five. Part of the reason revenue declined is due to the sale of the credit operations over this period reducing income from interest, but the major factor has been a reduction in total stores. I will talk about this reduction of stores in the below section a bit more as it is part of the company’s strategic “Path to Brilliance” plan. As can also be seen in that gross profit, operating profit, and net income have generally followed suit. With that being said there are some bright spots. Gross margins have been steady at around 37% showing costs have not increased over the years. Over the past two years many charges have been realized affecting the operating profit and net income. Adjusting for restructuring costs/charges, goodwill/intangible charges, and credit portfolio charges operating income and net income are $241.3/$106.36 Million in 2019 and $285.1/$156.4 Million in 2020. Using these adjusted numbers shows the core operations better and are more comparable to prior years. What can be seen by these numbers is that operating margins have decreased from around 11% to 5% while net margins have decreased from 7.5% to around 2%. While these adjusted numbers are nice to use for comparisons the charges taken need to be discussed. The restructuring and credit charges in past years are very real but are expected with the announcement of Signet’s plan to become leaner and more efficient company. All charges related to impairment of goodwill and intangibles are due to the readjustment of projected cash flows from the Zales acquisition that are in line with the new business plan. As an investor you never like to see a company you own basically admit they paid too much during an acquisition.

For fiscal year 2020 revenue decreased 1.76% while adjusted net income increased 47%. North American sales were down 1.3% with same store sales increasing 1.1% and average transaction value increasing 0.5%. For the international segment sales were down 10.1% with same store sales decreasing 4.9% and average transaction value flat. The decrease in sales can be somewhat attributed to the decrease in overall stores as total year same store sales increased 0.6%. The international business has been a poor performer over due to a difficult retail landscape.

In Q1 of fiscal year 2021 the results were very bad. The quarter ranged from February to April during peak shutdowns for COVID-19. Revenues for the quarter were $852.1 Million, down 40.5%. On March 23rd Signet closed all stores in North America leaving just online sales to be recorded. Same store sales for the quarter were down a massive 38.9% but eCommerce sale rocketed up to 19.3% of total sales during the quarter. Another asset impairment charge of $136.3 Million recorded as the pandemic set of a triggering event for property and operating lease rights of use.

Overall, the past five years have not been good at all financially. With the announcement of the sale of the credit portfolio and a restructuring plan I didn’t expect much more. The fact the margins have reduced drastically is not of much concern to me with as it is explained by the sale of the credit portfolio which made up over 40% of operating income.

As of most recent quarter the balance sheet is in good shape. Signet has a current ratio of 2.39x which increased from the previous quarter of 1.91x. The increase in the current ratio is due to a $714 Million dollar increase from a revolving credit facility for COVID-19. The quick ratio is 0.97x and in the last previous quarter was 0.50x. The liquidity of Signet is solid but I am a little worried about a cash crunch due to the 1.66x inventory turnover ratio. The debt to equity for Signet is high at 5.36x and increased from 3.65x due to the revolving credit usage and the decrease in retained earnings from the Q1 loss. 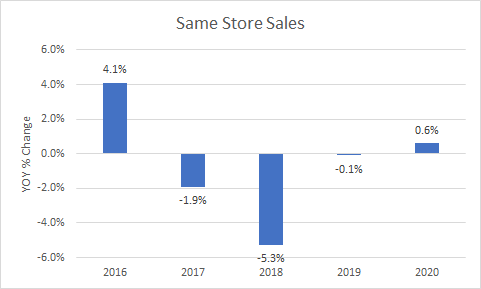 The major trend to watch for Signet is the same store sales numbers. As can be seen above in 2017 and 2018 these numbers were very poor. But in 2019 the “Path to Brilliance” plan was announced which would focus on reducing the footprint of poorly performing stores and focusing on growing eCommerce. What can be seen is that 2019 and 2020 were not nearly as bad as those past two years and it will be vital to keep track of this same store sales trend going forward. What I also have been watching is the percent of eCommerce sales as a percent of total sales. In 2017 Signet purchases R2Net, an acquisition the consisted of popular online jeweler James Allen. This purchase was big as it also provided the company with a successful technology base to leverage for other brands. In 2018 eCommerce was 8% of total sales but has grown each year. In 2019 it was 10.9% and in 2020 12.2%. As stated above due to the closure of all stores in Q1 the eCommerce percent increased to 19.3%. Also, in Q1 the company prioritized digital invests while stores were closed, which hopefully transfers for solid results for full year. The other major trend I have been watching is the store footprint, specifically the ratio of mall to off-mall stores in North America. One of the keys to the “Path to Brilliance” plan is optimizing real estate therefore it is key to be in profitable areas. As many know many malls have become obsolete so I want to see a significantly lower percent of stores there. In 2018 the ratio was 2.45 mall locations per off-mall but in 2020 it has decreased to 2.03 mall per off-mall in the North America segment. The total store reduction since 2019 has totaled to 348 stores or about 10% resulting in a decrease of 8.28% of selling space. In Q1 the company permanently closed 36 more stores continuing the trend of optimization.

Signet is currently trading around $15 per share. The GAAP EPS for FY 2020 was $1.40 meaning Signet is trading at a P/E of 10.71x. Using my adjusted net income above the EPS is $3.02 therefore the company trades at 4.97x. With a book value per share of Signet at $18.99 and the net tangible assets per share at $124.73 Signet trades at 0.79x and 0.12x, respectively. Currently the dividend is frozen but using last paid quarter the yearly yield would be 9.87%. Overall, the business looks to be trading a cheap valuation if you think the restructuring plan works out.

Overall, my previous two investments don’t look to be winners as I am down over 66%. Over the past five year revenue and net income have decreased but this is all according to the company’s long term plan. Signet has met many goals in my mind with the reduction of the mall footprint and increasing eCommerce sales. With a better trend in same store sales it seems the plan may be working. With Q1 being a huge headwind, I don’t expect that trend to uphold this year. In the end I am going to hold on to my position in Signet until after the “Path to Brilliance” is complete. I believe that the business could show a bounce back in financials in the next two years as this plan completes. If we apply a P/E ratio of 15x to the adjusted average EPS of past two years of $2.54 the price per share would be $38, which I believe the stock could reach.

Disclosure: I am/we are long SIG. I wrote this article myself, and it expresses my own opinions. I am not receiving compensation for it (other than from Seeking Alpha). I have no business relationship with any company whose stock is mentioned in this article.

© Reuters. Australia stocks higher at close of trade; S&P/ASX 200 up 1.51% Investing.com – Australia stocks were higher after the close on Friday, as gains in the , and sectors led shares higher. At […]