The shares of Realogy (RLGY) have rallied 65% since we first wrote about them in July last year, but we’re not taking any credit for that as we were sitting on the fence back then.

Clearly, investors are betting on a turn-around in the competitive pressure, and there are indeed promising signs of that. There is also the supporting low rate environment, a substantial cost-cutting effort, new growth initiatives and considerable deleveraging. So we’re getting more positive about the company.

The company is suffering from a lack of growth in its core markets and associated decline in operational performance:

However, despite that there are some reasons to be more optimistic:

The low rate environment is a notable contrast with a year ago when interest rates were rising, turning a headwind into a (mild) tailwind, improving volume from -3% in Q2 to -1% in Q3.

However, there are longer-term headwinds like declining population growth and the low propensity of home ownership of millennials.

Management argued that it noticed a marked decrease in competitive pressure in September and October. This is a big deal as the competitive environment has been increasing for quite some time, putting upward pressure on the commissions of agents (Q3CC):

As we told you earlier this year, the competitive intensity in agent recruiting and retention took a large step-up in Q4 2018 and continued through this past summer with August 2019 being one of the most intense months in the last two years. This challenge has really been all financial disruption from one competitor not the technology disruption that grabs headlines, but then something happened in September.

Investors seemed to start caring about profitability and it started to show up in the competitive environment. In both September and October, we saw a substantial decline in agent recruiting intensity both year-over-year and compared with the summer of 2019 from our most intense competitor. And in our own brokerage business, September and October were two of the three best months of agent growth for us in the last two years. And so while we cannot predict what other companies will do in the future, this is by far the biggest change in the competitive environment to our benefit that I have seen in the last two years.

The competitive pressures were worst in California, but here to these improved albeit less so than national.

The point is, it takes several quarters for this lessening of competitive pressure to show up in the commission split (the competition for brokers allowed them to earn more of the transaction commission).

The lessening of competitive pressures also allows the company to retain more agents and hire more new ones (Q3CC):

Commission split pressure was lower than we had previously anticipated. Our new commission plans remain well-received by the market, contributing to the three-plus percent NRT agent growth, we have achieved so far this year.

But here too there is a lag of a couple of quarters for this to show up in the figures as the new agents have to get up to speed, which takes some time.

Then there is the issue whether this improvement will continue, it’s early days to call the September change a sea change.

The company also introduced a host of new consumer-facing products like:

The company had been engaged in trials, testing iBuying in a few cities, but apparently aren’t convinced of the financial merits. RealSure is a substitute.

It remains to be seen to what extent this can stem, or even reverse the revenue decline as it’s too early for any conclusions.

The company has also embarked on a cost-cutting effort (rationalizing office footprint and related workforce) that is likely to exceed its $70M target in 2019 and the idea is that additional efforts make this $80-100M in cost reductions this year, from the earnings deck: 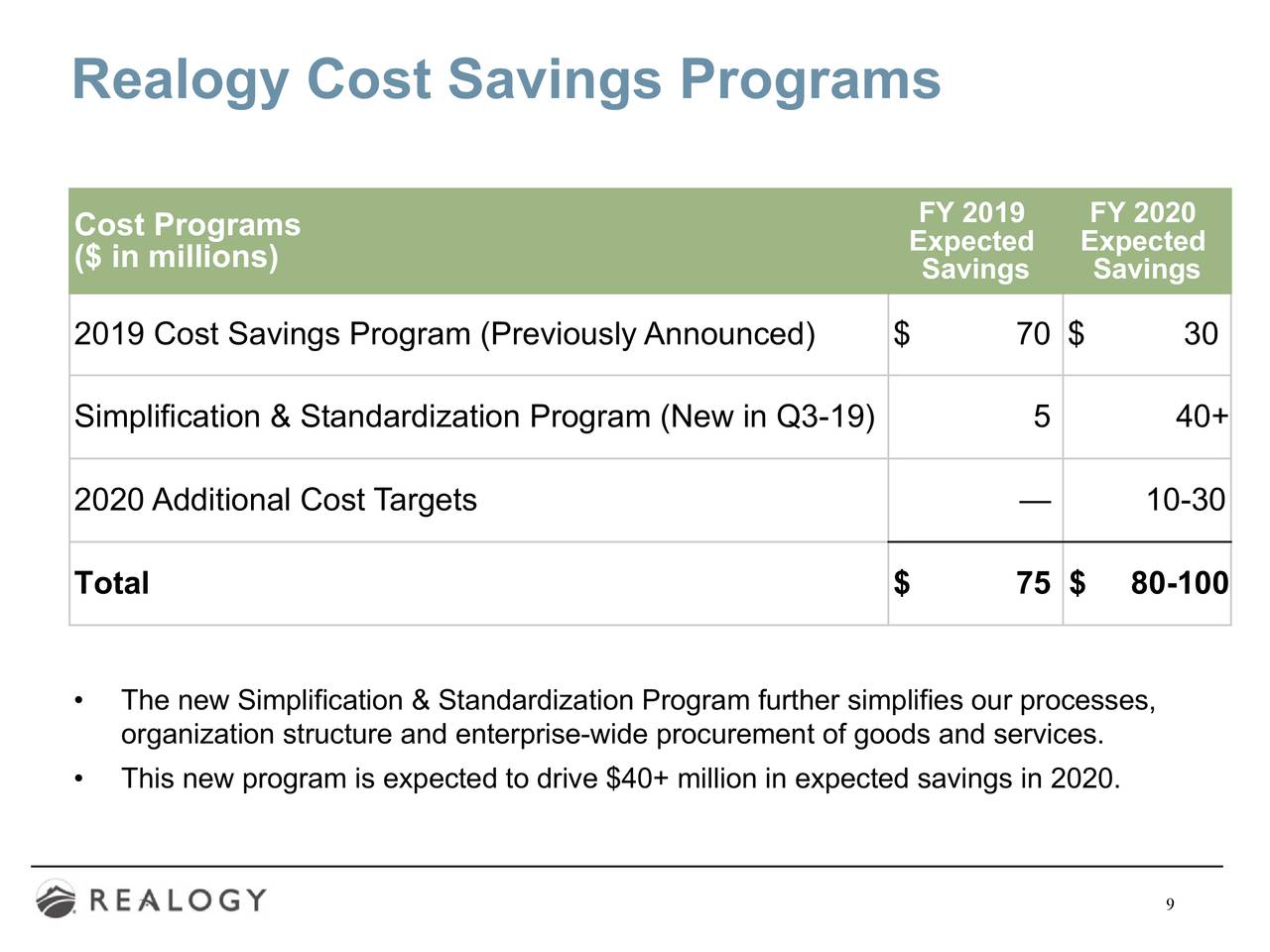 The company has already attained 80% of the $70M target by the end of Q3, but the biggest part of that will show up in Q4.

The company is also eliminating its $40M dividend, and the proceeds of cost-cutting efforts and the dividend are going to deleveraging.

The company is selling the relocation part of its Cartus business to SIRVA for $400M, from the Q3CC:

We are divesting a non-core, very complex business. At the same time, we’ve also signed a five-year Broker Services Agreement with SIRVA, with the goal to continue to provide high quality brokerage services, through the Cartus broker network to our current relocation clients and to try to earn even more relocation transactions from SIRVA. Today, we’re already earning about 1,000 of SIRVA’s current relocation transactions in our network.

The company retains the Cartus Affinity business, delivering brokerage services to Affinity members. Most of the proceeds will go to debt reduction and will close in H1 2020.

Speaking about the Affinity business, its long-term partnership with its biggest Affinity partner, USAA came to an end as it focuses on its core business.

We should keep in mind that this USAA impact is yet to come on Affinity business on the Cartus P&L and other parts. There is a roughly 50-50 split between the direct hit and the downstream hit, with the latter split at 80% RFG, 20% NRT.

However, it adds to deleveraging as the loss of revenue is more than the loss of EBITDA, so it’s not all bad, and it will only show up mostly in 2020, in Cartus and downstream.

The main results per segment, from the earnings deck: 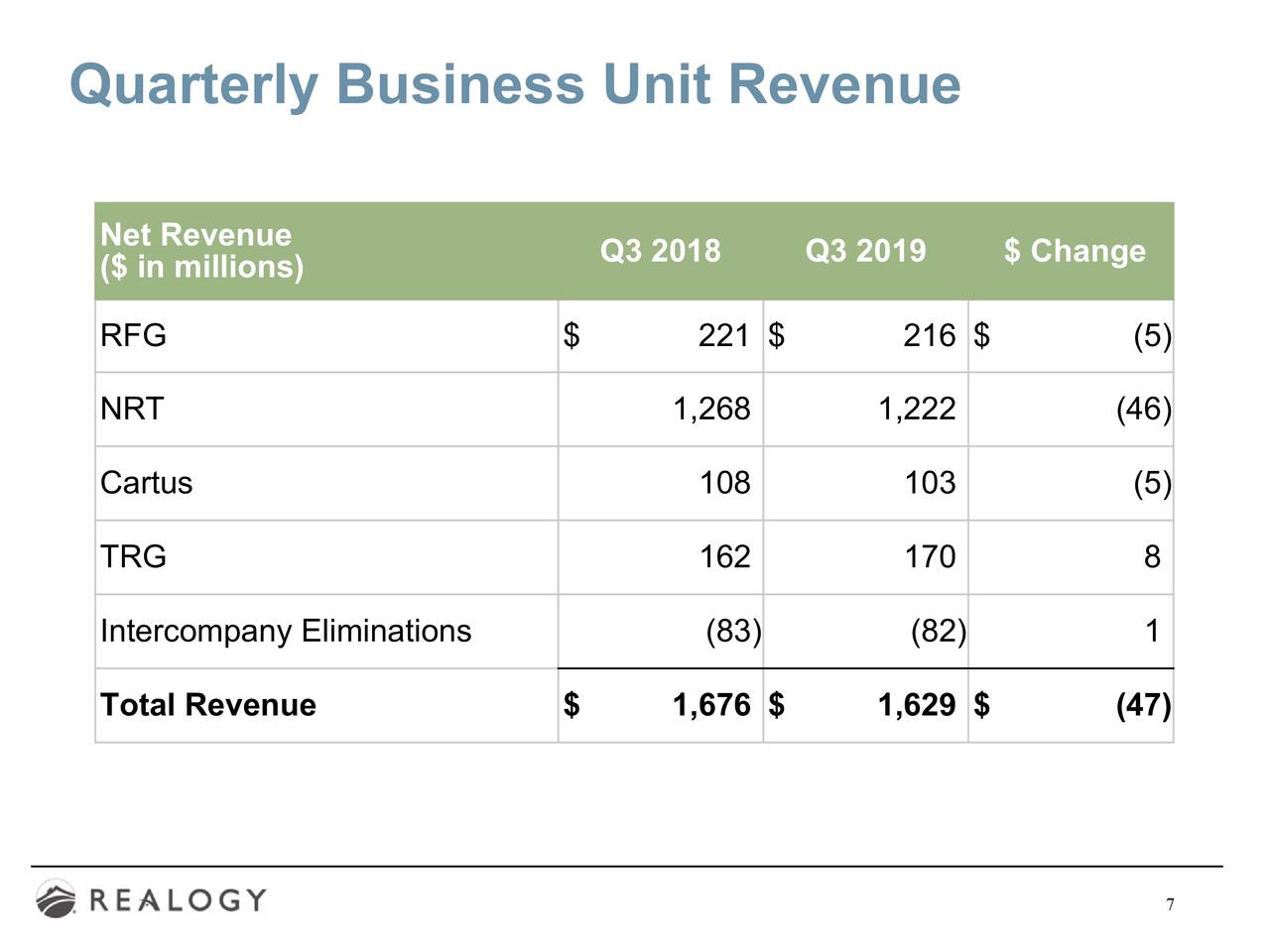 And the EBITDA performance per segment: 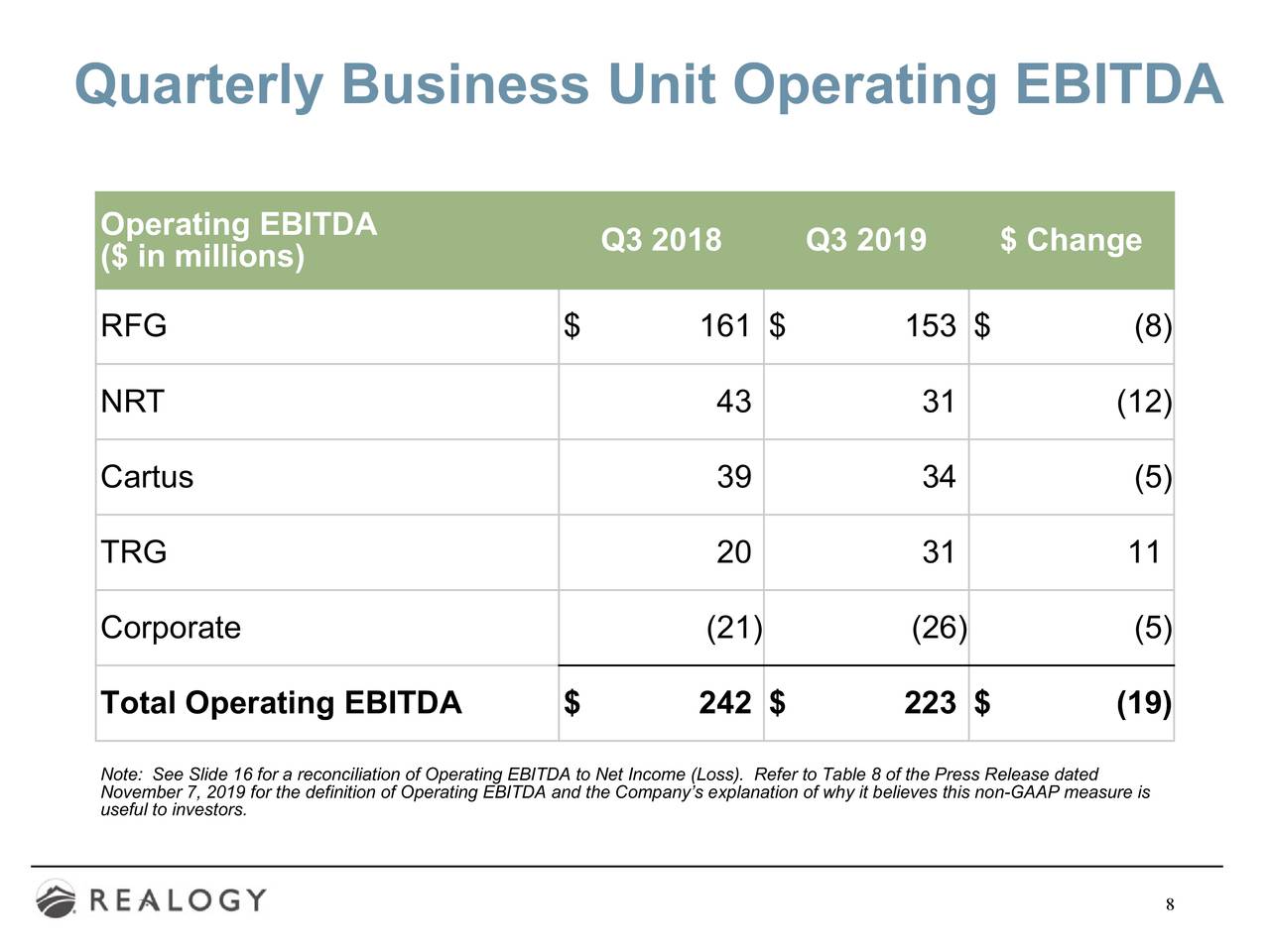 Here is a segment overview with the main drivers, from the earnings deck: 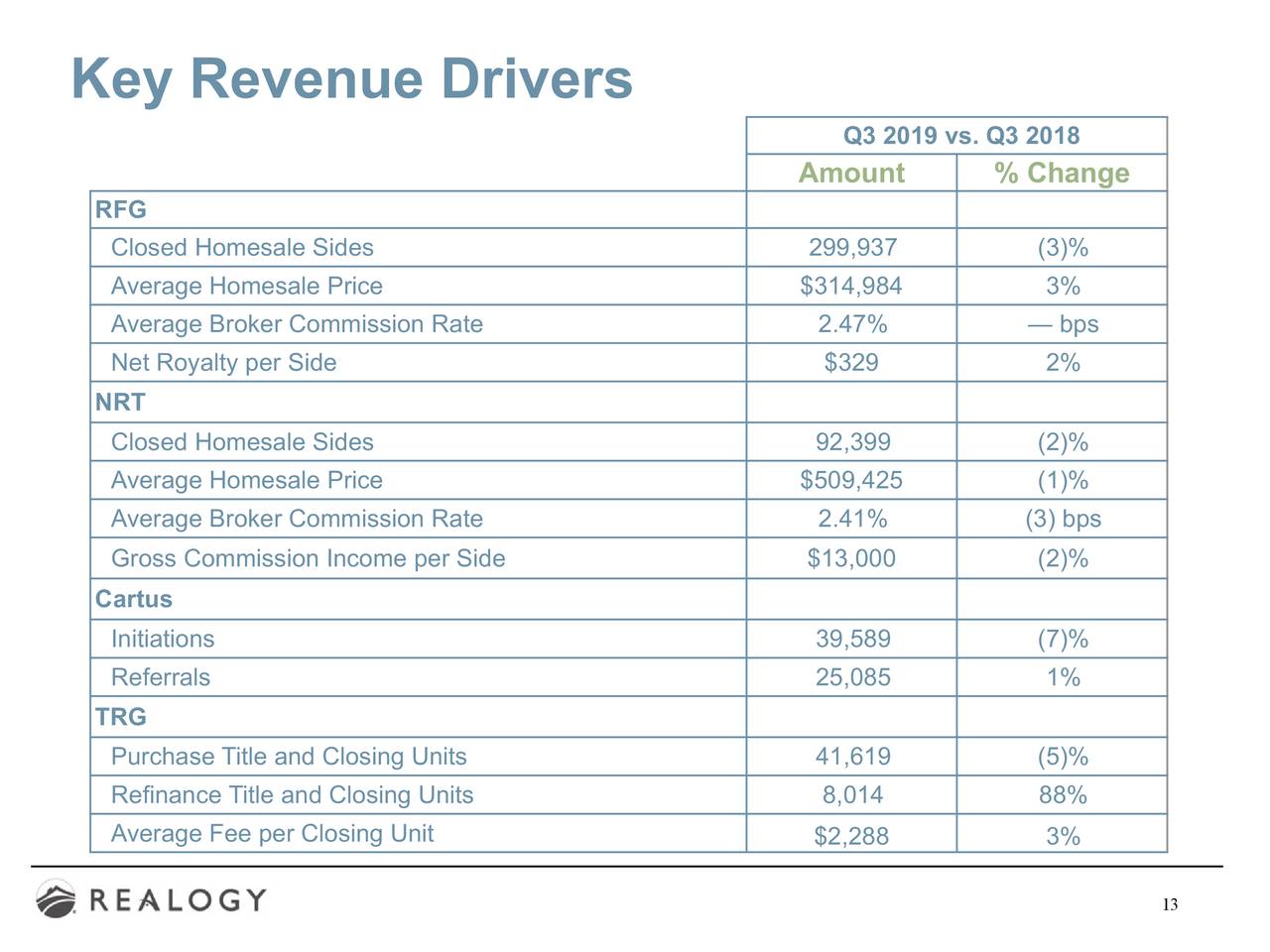 The guidance for Q4 was summed up on the Q3CC:

Looking ahead financially to the rest of the year and subject to potential macro and other uncertainties, on operating EBITDA we now expect to land near the lower end of the $590 million to $610 million guidance previously provided. Landing near the lower end of our operating EBITDA guidance is based on us having around 5% volume growth in Q4 with a bit better balance between NRT and RFG. We expect to be below NAR’s current Q4 transaction volume forecast of 13% as we’ll continue to experience headwinds from the impact of competitor pressures we have faced since late 2018.

The 5% volume growth is largely driven by higher recruitment, enabled by an easing of those competitive headwinds.

Despite the headwinds, the company was still able to produce considerable (although clearly declining) amounts of free cash flow with which to reduce its large outstanding debt.

And measures like the cost-cutting program, dividend elimination and the $400M divestiture of the relocation part of the Cartus business are improving leverage, but debt is still substantial, from the earnings deck: 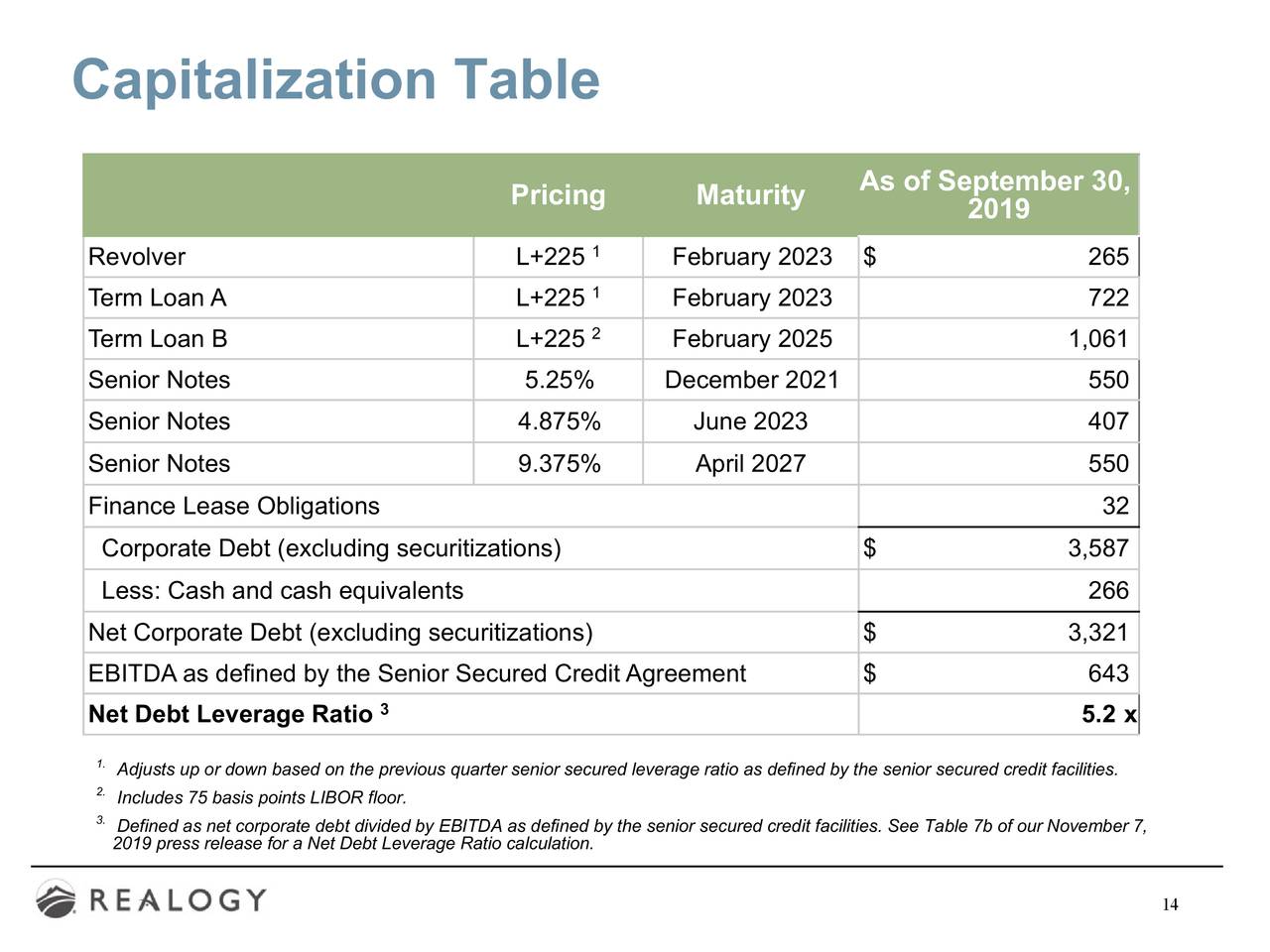 There are a number of fairly obvious risks:

The declining valuation multiples aren’t all that surprising, considering the competitive headwinds and decline in cash flow and EBITDA margin:

Analysts expect an EPS of $0.93 for 2019 rising marginally to $0.96 in 2020, giving the shares a rather low earnings multiple. But the shares have a long way before they can restore some of their former glory: 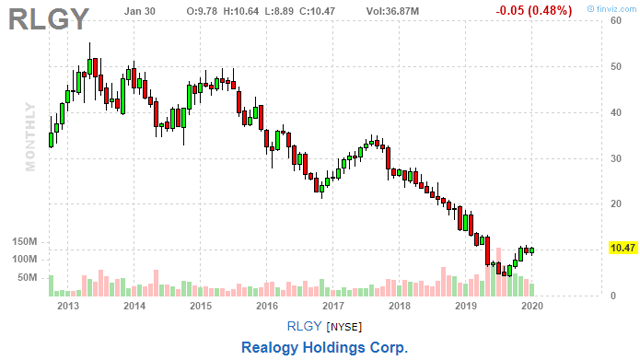 Despite promising early signs, it remains to be seen whether the competitive headwinds have turned. If they have, we think better times are ahead for shareholders, given the growth initiatives, cost-cutting and ongoing deleveraging.

Given the doubling of the share price since the depths of September last year, investors are clearly betting on this. We think they are right, but we are keeping a weary eye on the competitive landscape.