AUD/USD remains under pressure ahead of the Reserve Bank of Australia (RBA) Minutes, and the exchange rate may continue to depreciate going into the Federal Reserve meeting as it extends the series of lower highs and lows from the previous week.

The RBA Minutes may do little to curb the decline in AUDUSD as the central bank reverts back to its rate cutting cycle, and a batch of dovish comments may drag on the Australian Dollar as officials warn that “the downside risks stemming from the trade disputes have increased.”

It seems as though the RBA will continue to insulate the economy as the US and China, Australia’s largest trading partner, struggle to reach a trade deal. In turn, Governor Philip Lowe and Co. may ultimately prepare households and businesses for lower interest rates as the “latest set of forecasts were prepared on the assumption that the cash rate would follow the path implied by market pricing, which was for the cash rate to be around 1 per cent by the end of the year.”

With that said, AUDUSD remains vulnerable ahead of the Federal Open Market Committee (FOMC) interest rate decision on June 19 as the central bank is widely expected to keep the benchmark interest rate in its current range of 2.25% to 2.50%. However, a material change in the Summary of Economic Projections (SEP) may influence foreign exchange markets as Fed Fund futures continue to reflect a greater than 90% probability for a September rate-cut.

It remains to be seen if Chairman Jerome Powell and Co. will project a lower trajectory for the benchmark interest rate as President Donald Trump tweets that “the Fed interest rate way too high.” A material change in the forward guidance for monetary policy is likely to alter the near-term outlook for AUDUSD as FX traders brace for an imminent change in regime.

Until then, downside targets remain on the radar for AUDUSD,but retail sentiment remains skewed even though the exchange rate takes out the May-low (0.6865) and extends the bearish sequence from the previous week. 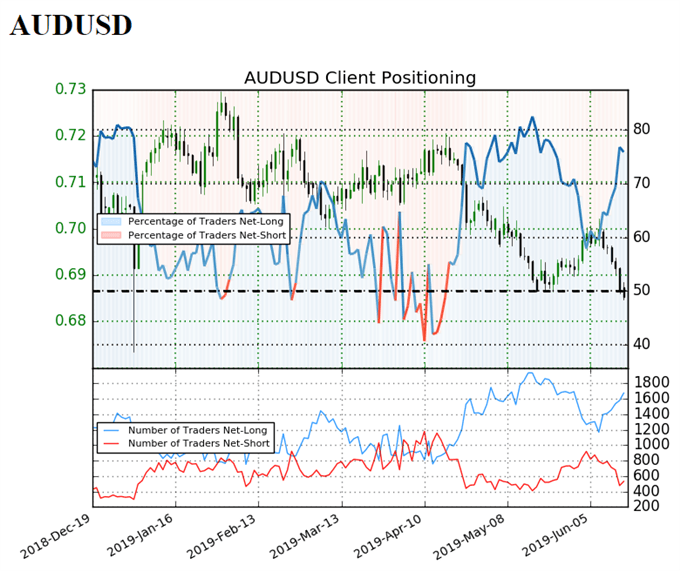 The IG Client Sentiment Report shows75.9% of traders are net-long AUD/USD compared to 64.7% last week, with the ratio of traders long to short at 3.15 to 1. Keep in mind, traders have been net-long since April 18 when AUDUSD traded near 0.7160 even though price has moved 3.8% lower since then.

The number of traders net-long is 8.6% higher than yesterday and 20.6% higher from last week, while the number of traders net-short is 9.4% lower than yesterday and 28.6% lower from last week. Profit-taking behavior may account for the recent drop in net-short position, but the ongoing tilt in net-long interest offers a contrarian view as both price and the Relative Strength Index (RSI) continue to track the bearish trends carried over from late-2018.

Are you looking to improve your trading approach? Review the ‘Traits of a Successful Trader’ series on how to effectively use leverage along with other best practices that any trader can follow.

Want to know what other currency pairs the DailyFX team is watching? Download and review the Top Trading Opportunities for 2019

jejim/iStock Editorial via Getty Images Synopsis’s (NASDAQ:SNPS) stock has been through many ups and downs since the last time I covered it on January 28 and has lost 17.6% since the beginning of 2022. During […]