The recent selloff, particularly in tech stocks, has created what I believe to be strong buying opportunities. Market leaders have been sold hard, improving their valuations and creating setups where it appears a base can be made for another leg of the rally.

However, not all stocks are created equal, and one that I think is going to continue to struggle is Intel (INTC). The company saw its shares decimated in late July, and two months later, they haven’t really begun to recover. I think there is enough evidence to suggest that Intel’s weakness will continue, particularly relative to the broader market and that it isn’t worth your time. 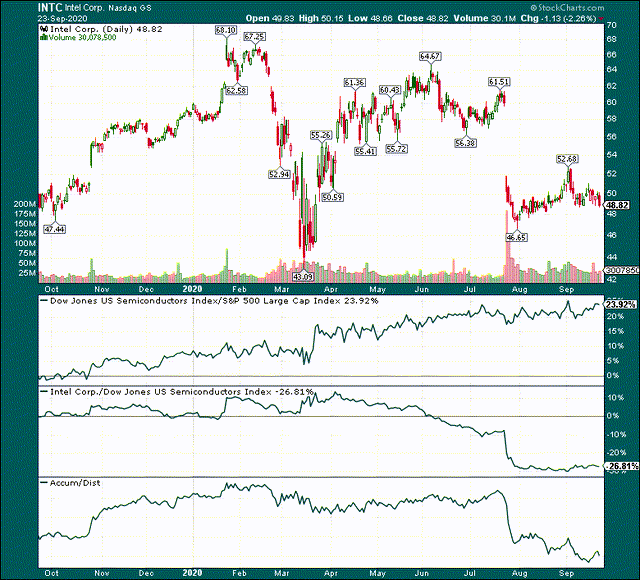 We can see that Intel has failed to recover even a small portion of the late July plunge when it gapped from ~$60 to ~$52 in one fell swoop. Gaps like this tend to act as resistance, both on the bottom and top of the gap, so I think Intel is going to have a difficult time cresting the $52 area. Indeed, the stock tried to take back the gap in early September, only to be rebuffed. That’s not a good development for bulls.

In addition, we can see that the semiconductors have been huge outperformers this year, blasting past the S&P 500 and not looking back. However, Intel has severely underperformed its peer group, having been left in the dust since the middle of the year. In other words, Intel is in a very strong group but is the worst house in a great neighborhood, so to speak.

Finally, the accumulation/distribution line turned very bearish back in late July and hasn’t reversed. Indeed, it is continuing to decline, indicating that investors are growing more bearish as there seem to be more sellers than buyers.

None of this guarantees continued weakness for Intel, but it sure does paint a tapestry of bearishness, in my view.

Intel’s share price declines haven’t been thought up out of thin air by investors; the company is facing a growth problem that it doesn’t seem to have a solution for.

Revenue is expected to essentially stagnate this year, followed by the same next year. Intel is in a period of transition where it still relies upon its legacy businesses to bring home the profit, while it scales up its cloud-based products and services, among other things.

That’s all fine, but Intel is like certain other tech giants where the products that made them giants are no longer that relevant to future growth, so there are trade offs being made. Those trade offs are resulting in Intel’s revenue coming in flat – more or less – and unless it goes out to buy growth, as it has tried to do in the past, this condition is unlikely to change anytime soon.

The thing is that while Intel is struggling to grow, it has some very strong points as well. One is certainly free cash flow, driven by the company’s enormous margins.

Free cash flow has been huge in recent years, cresting $16 billion last year, with estimates for $16+ billion this year and next year. There are few companies in the US that generate this sort of free cash flow, and it affords Intel the ability to return much of it to shareholders.

Indeed, Intel has actually returned more cash to shareholders than it has generated in some years, including 2019.

Intel hasn’t been afraid to raise its ample dividend or buy back lots of shares when it sees value in the stock. With nearly $14 billion in repurchases last year, Intel is one of the best in the market by this metric, putting its spare cash to work for shareholders (and then some).

The problem is buybacks and dividends won’t help it grow, and the market has already priced in this behavior since it has been going on for years. In other words, while Intel is doing a great job of returning cash to shareholders, that isn’t going to fix its growth problems, and by extension, is unlikely to raise the flagging share price.

Below, we have the company’s diluted shares outstanding in millions, in addition to a line showing year-over-year change in the float. 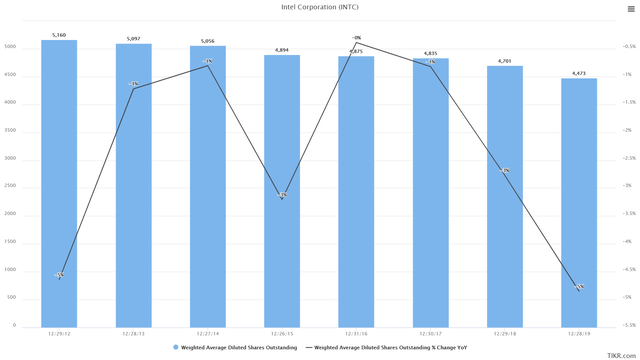 Intel has managed to reduce its share count over time, but keep in mind that a stock with a $200+ billion market capitalization takes a lot of money to move the needle on the float. These reductions are fine, but as I mentioned, aren’t of the size that Intel needs to offset its weak growth outlook. There are stocks that are able to do this, but Intel isn’t one of them.

I’m not the only one that thinks Intel is going to struggle to grow in the coming years.

Estimates are for 2020 and 2021 earnings to come in at roughly the same level to 2019. Keep in mind that Intel will almost certainly buy back a low single digit percentage of the float this year and next, or potentially more than that if it can’t find anything to do with its ample free cash flow. That means that on a dollar basis, earnings are likely to decline slightly, offsetting repurchases.

Buying stocks of businesses with declining earnings isn’t exactly a winning strategy, and as much as Intel has going for it with its cash production, this is an inescapable fact.

Shares are going for 10.7 times this year’s earnings, with the same multiple on next year’s earnings. That may sound cheap compared to other tech giants with their massive multiples, but investors pay for growth. Intel doesn’t have that, so investors aren’t paying up for it; it really is that simple.

The current multiple is right in line with where Intel has traded in the past, so I don’t necessarily see it as cheap or expensive; it is valued about where it should be based upon its fundamentals. The problem is that with the stock already having been hammered this year, you’d probably think it was cheap, but it just isn’t. In my view, Intel was overvalued and the selloff has simply rectified that condition.

Using the yield as another valuation tool, I think Intel looks about right as well.

We can see the current yield is almost exactly at the midpoint of its five-year range, meaning that if we value Intel based upon earnings or the yield, we get the same conclusion; it is fairly valued.

For a stock with essentially no near-term growth, a fair valuation means it is going to struggle to retrace the losses from this summer. With so many other semiconductor stocks performing better than Intel, there is no reason to waste your time with this stock. If you own Intel, you’d do well to take the proceeds and invest them in a company that will win in the future, not one that will simply try to keep up.

© Reuters. By Yasin Ebrahim Investing.com – The Dow fell sharply Friday, led by an Apple-fueled selloff in tech following quarterly earnings that failed to live up to expectations, while the ongoing rise in Covid-19 […]