Are these yields safe, and are the banks good investments for capital gains? Some of you might know of the Australian property bubble that has developed, so a natural question is, “is a 2007 US-style housing crash in the cards?”. This is especially pertinent since the Big Four are responsible for over 80% of housing lending in Australia. 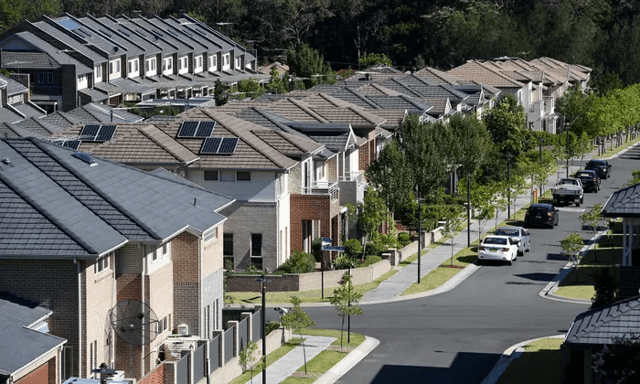 Source: From freefall to boom: what the hell is happening to Australia’s housing market?

Unfortunately, this Australia bubble has many similarities with the US bubble of two decades ago. Let’s use some news articles to knit together a storyline.

The Rise of Liar Loans

A sad (but unsurprising) feature of the Australian property bubble is the rise of liar loans. While not quite as insane as NINJA (No-Income-No-Job-&-Assets) loans from the US housing bubble of 2004-2006, these liar loans have become very common.

According to this article from September 2019, the four largest banks in Australia had the following rates of liar loans: 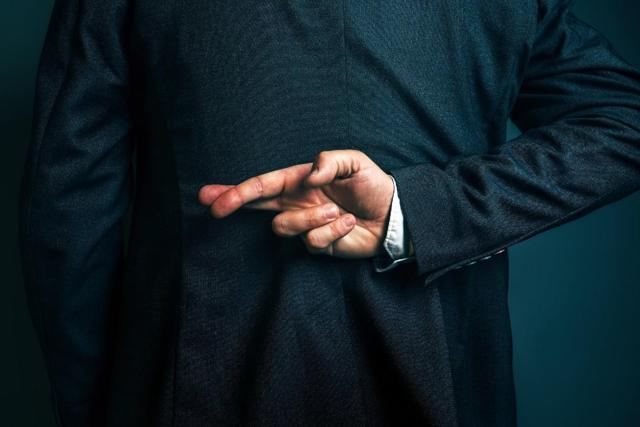 Source: More than one in three Aussies are lying to get their mortgage approved and dupe royal commission lending restrictions

Additionally, the same article provided these statistics about the people who acquired liar loans:

It appears that brokers slightly encouraged borrowers to lie on their applications, and borrowers have become more aggressive in pursuing financing – adopting a “if you don’t get it, just try again” attitude towards financing. More interestingly, just over half of liar loans were for interest-only loans – more on those later. Additionally, this article from September 2019 showed that those who lied to lenders in 2019 inflated their income by 17%, a rise from 12% in 2018. Clearly, borrowers have become emboldened to lie even more extravagantly.

Just how big of a problem are liar loans? According to this article from September 2017, Australian banks were sitting on $500B worth of liar loans out of a total of $1.6 trillion of mortgages held by the Australian banking system. Approximately a third of all mortgage loans in Australia are based on inaccurate or falsified information.

How exactly do banks assess their prospective lenders’ incomes? This article from November 2018 explained that banks relied on a flawed measure called HEM – household expenditure measure.

HEM represents the median spend on absolute necessities, but only 25% of people spend that way. Banks generally assume that the borrower’s household expenditures are equal to the relevant HEM. 75% of households spend on discretionary things such as alcohol, tobacco, adult clothing, and childcare. HEM better captures the expenditures of low income households and not those of the general population.

The Rise of Interest-Only Loans

An interest-only loan is quite straightforward – for a set period of time at the start of the loan (usually under five years), the payments are enough to only cover the accrued interest during each payment period. After the period “resets”, the loan payments begin paying down the principal. This means that just like with the adjustable rate mortgages (ARMs) in the US housing bubble, the borrower’s payments in the first few years are low, but once the period expires, the payments climb steeply. 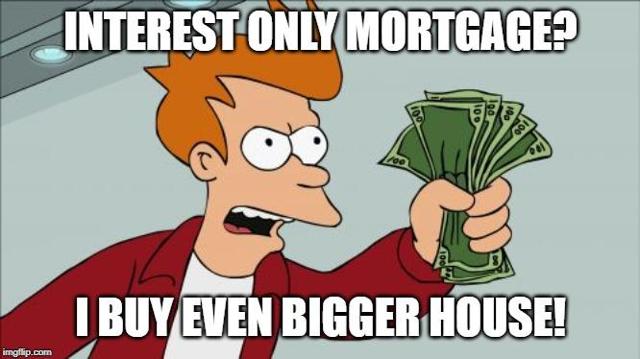 As of April 2017, interest-only loans constituted nearly 40% of residential mortgage lending in Australia. This stupendous number of interest-only loans prompted the Australian Prudential Regulation Authority (ARPA) to limit interest-only loans to 30% of new residential mortgages, as well as a 10% cap on annual growth in investor lending. This contributed to an 8% decline in home values from Sept. 2017 to Jan. 2019, according to this article. Amid a scene of falling home prices, ARPA then lifted this restriction on Jan 1, 2019, in the face of falling home prices.

Interest-Only Loans Are Resetting & The Prospect Of a Housing Crash

When interest-only loans reset, the monthly payments rise on average by 30-40%. There will be $500 billion in loans that will reset over 2020-2023, and both homeowners and investors who used interest-only loans will be squeezed. However, interest rate cuts and loosening lending standards have for now mitigated the risk of a rash of defaults and fire-sales of properties

Here are some graphics to help understand the situation, courtesy of the Reserve Bank of Australia: 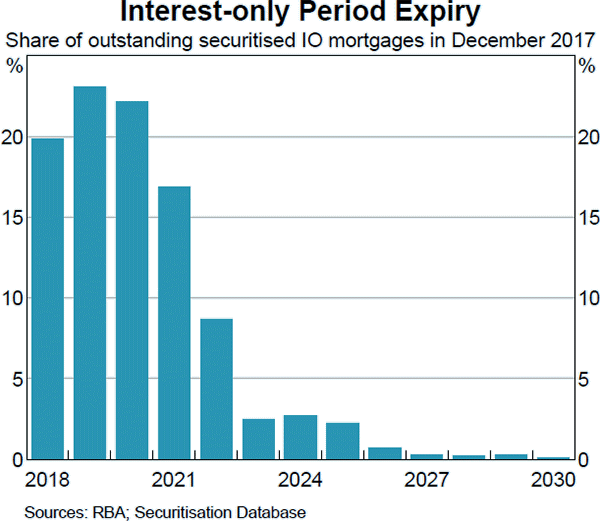 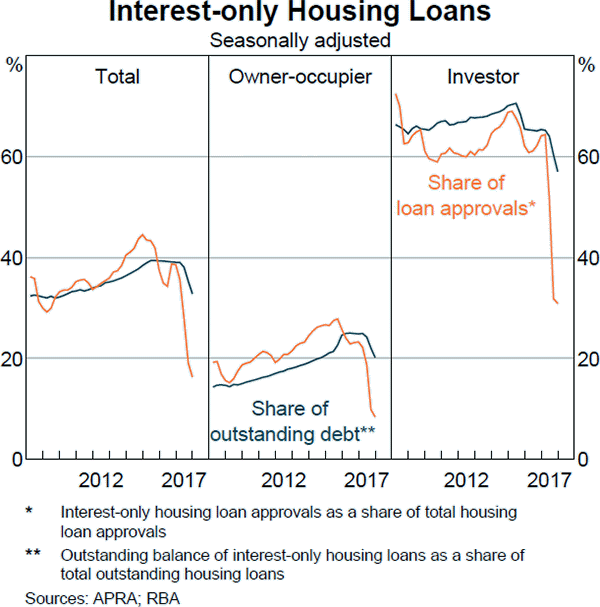 Around 7% of the stock of housing credit each year will reset. According to RBA, most people who take interest-only mortgages are investors. There are several ways that people have used to deal with the rising repayment burden:

1) People might draw on income streams originally destined to savings to pay the increase in mortgage payments after their interest-only loans reset.

2) Borrowers might refinance their interest-only mortgage to a P&I mortgage with a longer term of P&I repayment, thus lowering their monthly payments.

In fact, many interest-only mortgagees are refinancing from interest-only to P&I mortgages since the traditional P&I mortgages can offer a better rate now that interest rates have been cut. This might be another argument against the possibility of a housing fire sale in Australia.

The story should be quite worrying to an investor in any of the Big Four – at any time over the next four years, Australia’s property market is at risk of undergoing a fire-sale like the one in the US that began in 2007, driven by desperate borrowers who are unable to refinance their interest-only mortgages.

Nobody knows what percentage of people will default on their loans. However, a mitigating factor in the Australian case is that unlike the US, almost all mortgages in Australia are full-recourse, meaning that banks have claims to the other assets that borrowers own for the purposes of repaying the debt.

Time will tell what will happen. In the meantime, I wouldn’t count on any of the Big Four to keep their dividends intact.

marketlan Earlier this week, I wrote an article on Permian Basin Royalty Trust (PBT), giving a basic overview of the company explaining why the stock made it onto my watchlist as a potential beneficiary from […]

AzmanJaka The time has come again for me to take a look at what may be my favorite dividend growth stock I’ve never owned, Waste Management (NYSE:WM). Now, more than ever, as I delve deeper […]